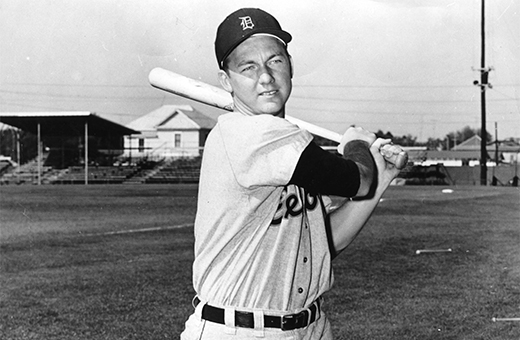 Al Kaline, the man known as Mr. Tiger, spent more than six decades in the Detroit Tigers organization as a Hall of Fame player, broadcaster, and executive — but not a single day in the minor leagues. He was as beloved for his grace and elegance off the field as he was for anything he did on the baseball diamond.

But boy, how he shined on the field, joining the Tigers as a teenage phenom in 1953 and becoming the youngest batting champion in major-league history at age 20 two years later. He went on to hit 399 home runs — plus two more to help the Tigers win the 1968 World Series — and record 3,007 hits during his stellar 22-season career, earning him induction to the Baseball Hall of Fame in 1980.

Albert William Kaline was born on December 19, 1934 in Baltimore. As Nick Waddell writes in his SABR biography of Kaline, “The legendary arm strength and accuracy that would make Kaline one of the most complete ballplayers of his time was evident early on.” After his sophomore year at Southern High School, Kaline was chosen to play in an annual game sponsored by the Hearst newspapers at the Polo Grounds in New York, where he won MVP honors. The day after his graduation, the Tigers signed him to a major-league contract as a $6,000 “bonus baby.” He made his Tigers debut just a few weeks later on June 25, 1953.

In 1955, he hit .340 to lead all batters in the American League — at the age of 20, he was one day younger than Ty Cobb when Cobb won the batting title in 1907. Kaline’s mark has endured for more than a half-century. Kaline finished runner-up to New York Yankees catcher Yogi Berra in AL MVP voting and was also selected to the first of 18 All-Star teams that season.

He made key contributions in the Tigers’ championship year in 1968, despite suffering a broken arm in May that kept him out of the lineup for two months and reduced him to a part-time role down the stretch. On September 17, Kaline pinch-hit for Norm Cash and ended up scoring the run that won the Tigers the pennant. After the game, Kaline told manager Mayo Smith he did not deserve to play in the World Series because other players had stepped up in his absence. As Waddell explained in his SABR biography: “Smith, knowing what Kaline meant to the Detroit organization, had other ideas. To get his star in, Smith put center fielder Mickey Stanley at shortstop, Jim Northrup in center, and Al Kaline in right. The move proved successful as the Tigers rebounded from a three-games-to-one deficit to win three straight games, including Game 7 over the Cardinals’ Bob Gibson. The Tigers won the World Series behind Kaline’s .379 batting average and two home runs.”

During Kaline’s career, he hit more home runs (399) and played more games (2,834) as a Tiger than anyone else, and he ranks in the top three with Cobb and Hall of Famer Charlie Gehringer in nearly every major offensive category for the team. His 10 Gold Gloves places him third all-time among all major-league outfielders, behind only Roberto Clemente and Willie Mays.

Following his retirement as a player in 1974, after he recorded his 3,000th hit off Baltimore’s Dave McNally, Kaline moved into the broadcast booth and spent more than a quarter-century behind the microphone with the Tigers. He earned another World Series ring as an announcer in 1984 and was still with the team for their final game at Tiger Stadium in 1999.

Through it all, Kaline maintained a sense of dignity and humility that endeared him to generations of baseball fans. “I wasn’t meant to be a superstar. I’m no Willie Mays or Mickey Mantle,” he once said.

He was just Al Kaline, and that was plenty good enough.