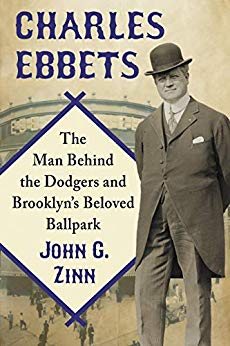 SABR is pleased to announce that John G. Zinn’s Charles Ebbets: The Man Behind the Dodgers and Brooklyn’s Beloved Ballpark, published by McFarland & Co., has been selected as the winner of the Ron Gabriel Award in 2019.

Zinn, from Verona, New Jersey, is the chairman of the board of the New Jersey Historical Society. He also won the Gabriel Award in 2014 with Paul G. Zinn for Ebbets Field: Essays and Memories of Brooklyn’s Historic Ballpark, 1913-1960. He will be honored at the SABR 49 convention, June 26-30, 2019, in San Diego.