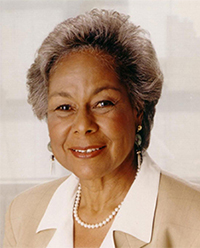 We are pleased to announce Rachel Robinson as the 2019 winner of the Dorothy Seymour Mills Lifetime Achievement Award.

Rachel Robinson is best known to many as the widow of Jackie Robinson, the man who integrated Major League Baseball when he debuted for the Brooklyn Dodgers in 1947, but her importance is so much greater. When Branch Rickey was scouting for a player to integrate baseball, he wanted someone with a family who could support and be his rock, and that family started with Rachel Isum Robinson. Many of Robinson’s accomplishments involve work for civil rights and education. While Jackie was still alive, they hosted jazz fundraisers at their home to help out jailed civil rights activists. She worked for many years as a nurse after earning her master’s degree in the field.

She was the founder and served as President of the Board for the Jackie Robinson Foundation until 1996. She is the author of Jackie Robinson: An Intimate Portrait. She is the recipient of many awards over her long and distinguished career, including the Candace Award for Distinguished Service from the National Coalition of 100 Black Women, the Equitable Life Black Achievers Award and the Associated Black Charities Black History Makers Award. In addition, St. John’s University, Springfield College, MacAlester College, Boston College, Suffolk University, New York University, Connecticut College, and the University of Massachusetts have conferred upon her honorary doctorates.

In addition to Robinson, the other finalists for the 2019 award were minor-league pitcher Ila Borders; Janet Marie Smith, Los Angeles Dodgers’ Senior Vice President of Planning and Development and acclaimed baseball stadium architect; and Justine Siegal, Baseball For All founder and longtime baseball player, coach, and advocate.