If you’re looking for a hitter who has dominated the game’s elite pitchers, look no further than Oregon native Ken Williams, who REALLY needs a nickname.  He wasn’t just a member of the 30/30 club, the dude was the president from 1922 to 1957 when Willie Mays became the first player to turn the trick twice.  Prior to 1956 when Mays joined the club, Williams was all by his lonesome.

Mays earned the sobriquet “Say Hey Kid,” one of the greatest nicknames of all time.  Ken Williams was called Ken Williams.  But among All-Stars from 1916-1925 he’s called “Sir.” 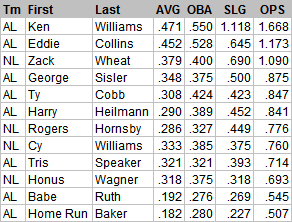 It’s interesting to note that three of the greatest sluggers in baseball history anchor the bottom of the list.  Wagner is getting on base, though; Ruth and Baker are merely shells of their actual selves.

Highlights and outstanding players include: 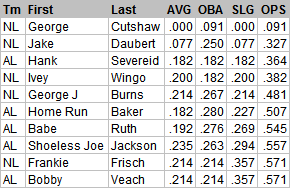 Let’s take a look at the pitchers. 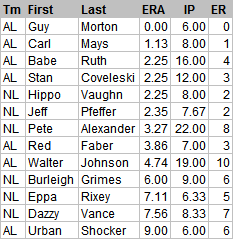 Let’s look at the tail-enders. 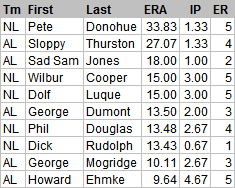 This article was originally published at Seamheads.com.