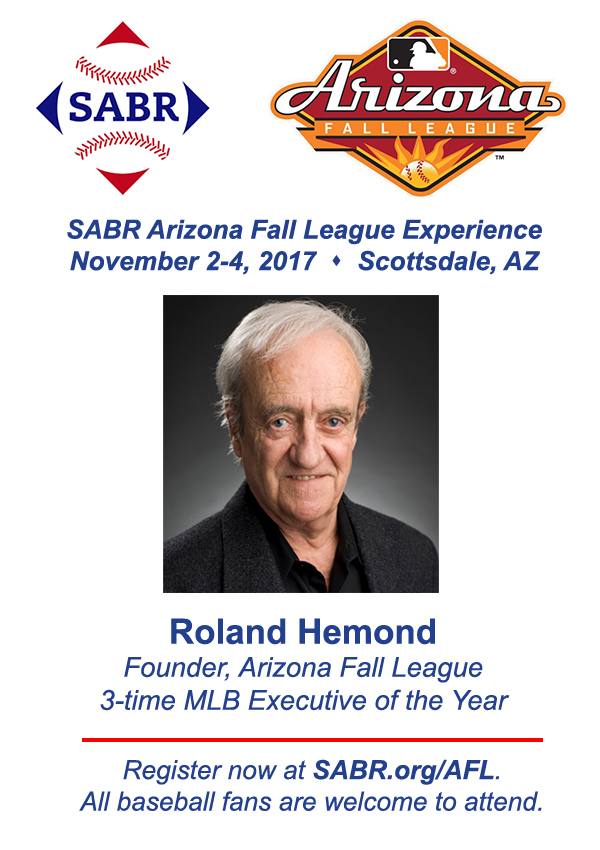 We’re excited to announce that longtime SABR member and local chapter namesake Roland Hemond will be a featured speaker at the ninth annual SABR Arizona Fall League Experience, which will be held Thursday, November 2 to Saturday, November 4, 2017.

Hemond — who is scheduled to speak at the Hemond-Delhi Arizona Chapter meeting on Saturday, November 4 — is credited as being the founder of the Arizona Fall League, baseball’s premier player development league for the last two decades.

In 2011, Hemond became the second recipient of the National Baseball Hall of Fame’s Buck O’Neil Lifetime Achievement Award and was honored during Induction Weekend in Cooperstown, New York. As a front-office executive who has spent more than six decades in baseball, Hemond was a three-time winner of Major League Baseball’s Executive of the Year Award and helped build winning franchises with the Braves, Angels, White Sox, Orioles, and Diamondbacks, where he still serves as a special assistant to President/CEO Derrick Hall.

The 2017 SABR Arizona Fall League Experience is open to all baseball fans.

Our ballpark dinner at Scottsdale Stadium on Thursday evening is expected to include guest speakers Del Unser, a former Philadelphia Phillies player and executive, AFL Executive Director Steve Cobb. On Friday night, we’ll have a special dinner at Don and Charlie’s, home of one of the best baseball memorabilia collections you’ll ever see. On Saturday, attendees will join members of SABR’s Hemond-Delhi Arizona Chapter for their regional fall meeting, with research presentations and more guest speakers. We’ll conclude the conference with the nationally televised Fall Stars Game on Saturday evening at Salt River Fields at Talking Stick. All of this, including transportation, is included in one low registration price.