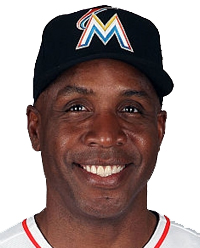 We are excited to announce that baseball great Barry Bonds will be a featured speaker at the SABR 46 convention this summer in Miami.

SABR 46 will be held July 27-31, 2016, at the Hyatt Regency Miami. Discounted early registration rates are available now at SABR.org/convention. All baseball fans are welcome to attend.

Bonds, who joined the Miami Marlins as their hitting coach in 2016, was one of baseball’s most complete and controversial players, a seven-time MVP and 14-time All-Star who ranks among the all-time leaders in almost every offensive category, playing for the Pittsburgh Pirates from 1986-1992 and San Francisco Giants from 1993-2007. He holds the single-season (73) and career (762) records for most home runs, surpassing Hank Aaron’s iconic total of 755 in 2007. His 2,558 walks are the most by any hitter, and he also ranks third in runs scored and fifth in RBIs. He stole 514 bases and earned eight Rawlings Gold Glove Awards. He is the son of former major-leaguer Bobby Bonds and the godson of Hall of Famer Willie Mays.

This special interview — which will be part of our SABR 46 pregame ballpark session at Marlins Park on Friday, July 29 — will be moderated by SABR member and MLB.com columnist Barry M. Bloom. You must be registered for SABR 46 and have a Marlins game ticket in order to attend the ballpark session. Discounted all-inclusive registration packages are now available at SABR.org/convention.

More details and the complete schedule will be announced in the coming months. Find more information on SABR 46 at SABR.org/convention.