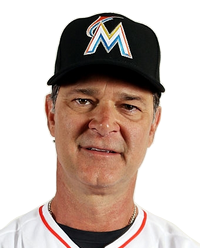 We are excited to announce that Miami Marlins manager and former All-Star first baseman Don Mattingly will be a featured speaker at the SABR 46 convention this summer in Miami.

SABR 46 will be held July 27-31, 2016, at the Hyatt Regency Miami. Discounted early registration rates are available now at SABR.org/convention. All baseball fans are welcome to attend.

Mattingly is entering his first year as the Marlins manager, after a five-year stint with the Los Angeles Dodgers, where he won three consecutive NL West titles from 2013-15. He played 14 seasons with the New York Yankees, compiling more than 2,000 hits, 222 home runs and a .307 lifetime average. He was a six-time American League All-Star, a nine-time Rawlings Gold Glove Award winner, and voted the league’s Most Valuable Player in 1985. In 1987, he tied an MLB record by hitting home runs in eight consecutive games and set a record with six grand slams in a season.

This special interview — which will be part of our SABR 46 pregame ballpark session at Marlins Park on Friday, July 29 — will be moderated by SABR member and MLB.com columnist Barry M. Bloom. You must be registered for SABR 46 and have a Marlins game ticket in order to attend the ballpark session. Discounted all-inclusive registration packages are now available at SABR.org/convention.

More details and the complete schedule will be announced in the coming months. Find more information on SABR 46 at SABR.org/convention.