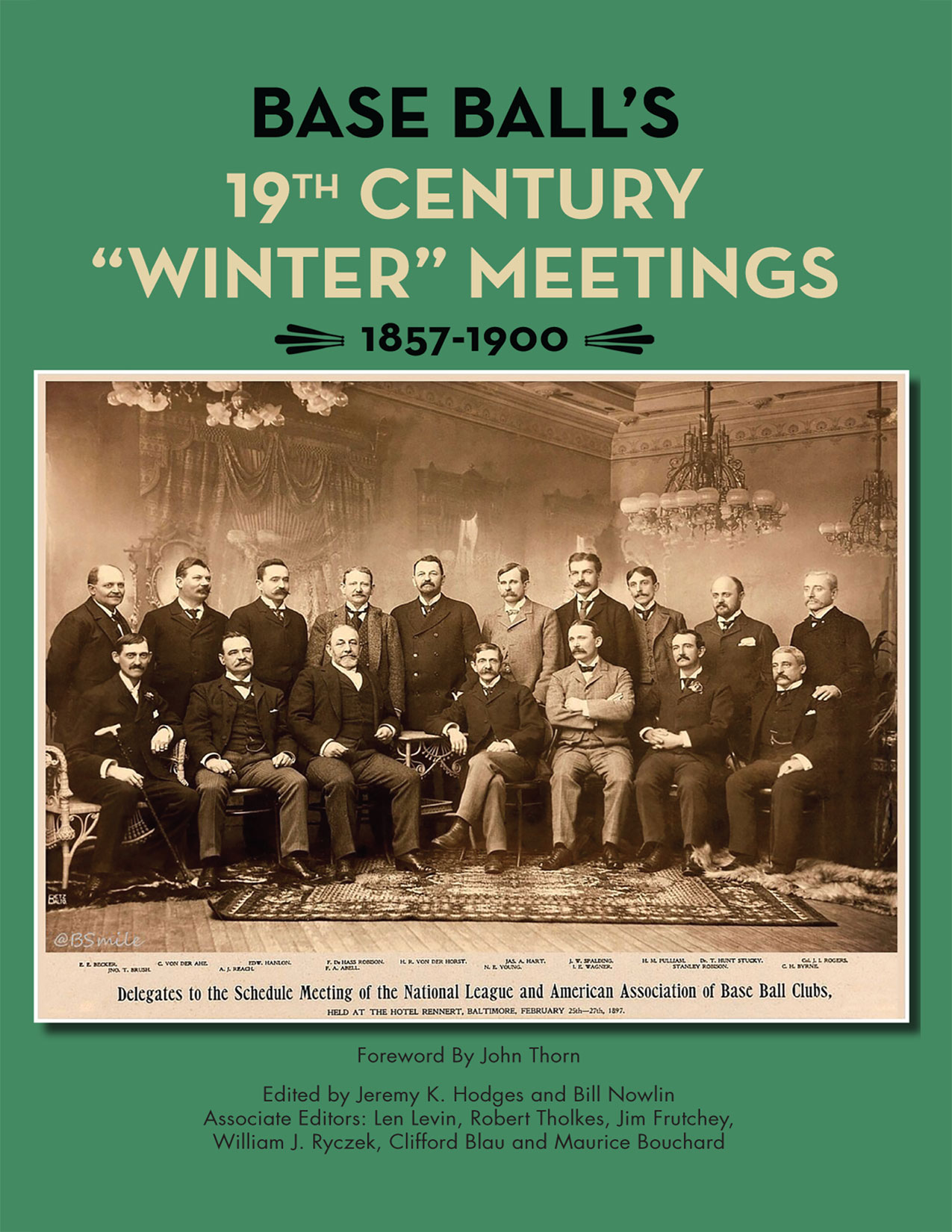 Base Ball’s 19th Century “Winter” Meetings looks at the business meetings of base ball’s earliest days (not all of which were in the winter). As John Thorn writes in his Foreword, “This monumental volume traces the development of the game from its birth as an organized institution to its very near suicide at the dawn of the next century.”

Twenty-nine members of the Society for American Baseball Research collaborated on this book. In his foreword, MLB Official Historian John Thorn offers by way of conclusion: “SABR’s essayists in this volume (as in the two that follow chronologically, although they were published first) clearly have advanced our knowledge of the period. This will become the great sourcebook for all future efforts to describe how the game grew, flourished, fought, nearly succumbed, and survived.”


For more than 40 years, SABR and its members have led the way in publishing the best baseball historical and statistical research. Our publications program is shifting to take advantage of new methods of publishing. Not only will we continue to publish new books like Can He Play? A Look At Baseball Scouts and Their Profession (released in December 2011); Detroit Tigers 1984: What A Start! What A Finish! (December 2012); Sweet ’60: The 1960 Pittsburgh Pirates (April 2013); Inventing Baseball: The 100 Greatest Games of the 19th Century (July 2013); Scandal on the South Side: The 1919 Chicago White Sox (June 2015); The Team That Time Won’t Forget: The 1951 New York Giants (December 2015); Nuclear Powered Baseball/The Simpsons (February 2016), Au jeu/Play Ball: The 50 Greatest Games in the History of the Montreal Expos (April 2016); Cuban Baseball Legends (July 2016); Baseball’s Business: The Winter Meetings: 1901-1957 (December 2016); Dome Sweet Dome: History and Highlights from 35 Years of the Houston Astrodome (February 2017); No-Hitters (May 2017); Puerto Rico and Baseball (June 2017); Bittersweet Goodbye: The Black Barons, the Grays, and the 1948 Negro League World Series (July 2017), The Whiz Kids Take the Pennant (January 2018), and Major League Baseball A Mile High: The First Quarter Century of the Colorado Rockies (May 2018), which showcase the best efforts of SABR’s members, chapters and committees, but new technology makes it possible for us to bring out-of-print titles like Run, Rabbit, Run: The Hilarious and Mostly True Tales of Rabbit Maranville (February 2012), Great Hitting Pitchers (March 2012), Nineteenth Century Stars (August 2012); Batting (January 2013); The Fenway Project (September 2013); ’75: The Red Sox Team That Saved Baseball (April 2015), and The 1967 Impossible Dream Red Sox: Pandemonium on the Field (June 2017) back again.