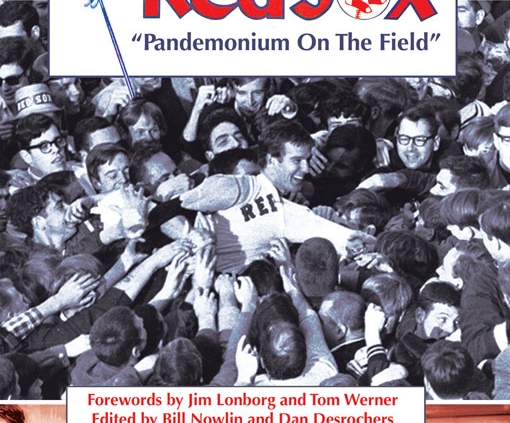 It’s the 50th anniversary of the Impossible Dream, so add this new baseball book from the SABR Digital Library to your collection:

The ‘67 Red Sox fulfilled a seemingly Impossible Dream, overcoming 100-to-1 odds by climbing out of ninth place to capture the pennant for the first time in 21 years. Thousands of delirious fans streamed onto the field at Fenway Park mobbing the team, dismantling the scoreboard, climbing the screen behind home plate. It truly was, in the words of Sox radio announcer Ned Martin, “pandemonium on the field.”

As Peter Gammons once wrote of this great season, “It wasn’t always the way it is now, and might never have been but for ’67.”

This book is a tribute to the members of the Impossible Dream team, including biographies of all 39 players that year as well as appreciations of this remarkable season by an all-star lineup featuring Joe Castiglione, Ken Coleman, Gordon Edes, Peter Gammons, Jim Lonborg, and many more. The book also presents over 300 rare photographs and memorabilia from this special Red Sox season.

A project of the Boston chapter of the Society for American Baseball Research, this volume gathers the collective efforts of more than 60 SABR members and friends of the nonprofit research society.