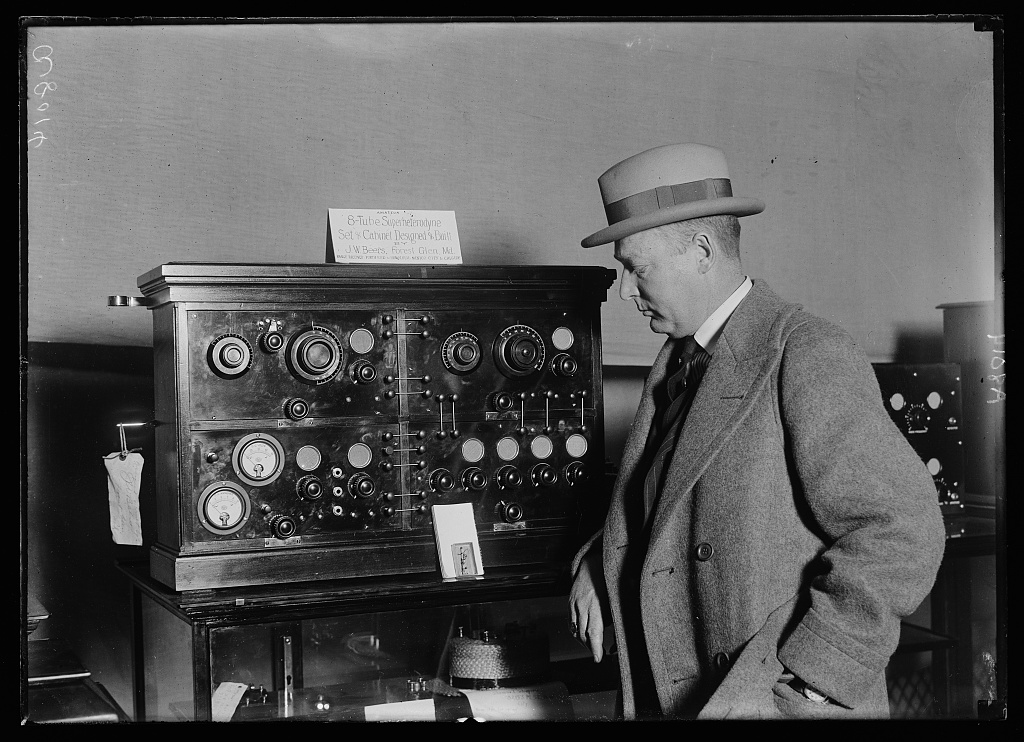 A man checks out different radio sets on exhibition at the 1924 Radio Show in Washington, DC. (LIBRARY OF CONGRESS, HARRIS & EWING COLLECTION)

Baseball had the great fortune to have been born within a few decades of Guglielmo Marconi, the Italian inventor who is credited in 1896 with the world’s first patent of a radio wave-based communication system. Marconi quickly raised capital to commercialize his system, and by the early 20th century radio had effectively become the iPhone of its time.

In the 19th century, while forms of radio transmission were still being invented, baseball scores were mostly made known to fans by way of telegram to local taverns and billiard halls, which effectively became the first sports bars. As John Thorn, Major League Baseball’s Official Historian, observes, “with the advent of the telegraph, game scores and accounts could be transmitted across the nation on the day of play or the next.” This technological innovation changed the future of the sport since “telegraphed play-by-play and summary statistics fed the gambling appetites that made baseball a national pastime.”1

In 1888, Edward Van Zile applied for a patent for a “Bulletin Board and Base Ball Indicator,”2 which was a large board with set pieces that could be manually moved around by local technicians as distant telegraphers relayed the plays occurring on the field. This technical innovation facilitated viewing parties where huge crowds would gather in bars, theaters, and plazas. Most of this activity was centered around each season’s World Series, and clearly wasn’t what we would now consider a play-by-play “broadcast.”

This all changed on August 5, 1921 in Pittsburgh, where local radio station KDKA delivered a play-by-play oratory of that day’s Pirates game versus the in-state rival Philadelphia Phillies. The Pirates won 8-5, but the outcome of the game was inconsequential relative to what had been set in motion.

Two months later, the 1921 World Series was “streamed” nationwide by KDKA as well as WJZ in New Jersey. From such broadcasts, many working-class families (many of them immigrants new to American culture) were able to assimilate into mainstream American culture via the language of baseball. In turn, many of the ballplayers from that era were immigrants themselves, creating a symbiotic relationship couched mythically in the American Dream and practically in broadcast radio.

At that time, most teams were clustered in dense northeastern urban areas and owners relied heavily on ticket sales for their revenue. With respect to this potential paradigm shift in their product’s availability, most owners saw this development as having more of a dilutive than expanding effect on the business of the game. Cities with two teams would often ban broadcasts of each team’s road games so as not to interfere with the other’s home game attendance. On the other end of the spectrum were teams in the Midwest that could use radio as a means of reaching a vast frontier of fans who didn’t have local teams to follow.

This strategy is effectively how the Chicago Cubs and St. Louis Cardinals gained a foothold in the territories west of the Great Lakes and south of the Mason-Dixon line. Unlike most other major league club owners of the 1920s, gum magnate and advertising expert William Wrigley viewed game broadcasts on the radio as an opportunity to freely advertise both his ballclub, the Chicago Cubs, and his sugary treat. As a result, Wrigley expressed no bias as to which radio station could carry Cubs games.

The first on-site major league broadcast of a Cubs game took place in Chicago in 1924 in a postseason city series between the Cubs and White Sox on WDAP, soon to become WGN, whose television affiliate would — five decades later — go on to become licensed nationally to satellite and cable subscribers as a “superstation,” catapulting the Cubs to cult-like status across the country’s hinterlands.3

In 1934, baseball commissioner Kenesaw Mountain Landis gave his blessing to the sale of broadcast rights to the World Series as the property of the teams involved. This decision got attention in New York City, which saw its teams most often represented in the fall classic, and was one of the last holdouts on the ban of widely distributed radio transmissions. This transaction ushered in the scaling of baseball marketing and advertising as we know it today.

As things turned out, what major-league baseball first feared most about the radio — its accessibility — ended up being its biggest advantage. Radio broadcasts, along with the story-telling talents of the broadcasters themselves, created generations of dedicated baseball fans from all walks of life, many of whom may never have attended a game. This feature of the game’s consumption solidified fandom for a sport already known as our nation’s pastime.

Morris, Peter. “Broadcasts of Baseball” in A Game of Inches: The Stories Behind the Innovations That Shaped Baseball: The Game on the Field: Volume 1. (Chicago: Ivan R. Dee, 2006), ebook.

https://sabr.org/wp-content/uploads/2020/03/research-collection4_350x300.jpg 300 350 sabr /wp-content/uploads/2020/02/sabr_logo.png sabr2021-07-29 00:57:452021-08-05 01:01:18Baseball on the Radio in the 1920s and ’30s: Blackouts and Bubble Gum
LnRiLWNvbnRhaW5lciAudGItY29udGFpbmVyLWlubmVye3dpZHRoOjEwMCU7bWFyZ2luOjAgYXV0b30gLndwLWJsb2NrLXRvb2xzZXQtYmxvY2tzLWNvbnRhaW5lci50Yi1jb250YWluZXJbZGF0YS10b29sc2V0LWJsb2Nrcy1jb250YWluZXI9Ijc2YjllMTlhZWJkNzhiNDY3YjA0YzY0YWNmZTMzMTY3Il0geyBwYWRkaW5nOiAwOyB9IC50Yi1maWVsZFtkYXRhLXRvb2xzZXQtYmxvY2tzLWZpZWxkPSJlYzI4OWVkZTg1NjU3MmE3ZDFiMGI2NGE3NjFmYmIxZCJdIHsgZm9udC1zaXplOiAxNnB4O3RleHQtYWxpZ246IGxlZnQ7IH0gIC50Yi1maWVsZFtkYXRhLXRvb2xzZXQtYmxvY2tzLWZpZWxkPSJlYzI4OWVkZTg1NjU3MmE3ZDFiMGI2NGE3NjFmYmIxZCJdIGEgeyB0ZXh0LWRlY29yYXRpb246IG5vbmU7IH0gLnRiLWZpZWxkcy1hbmQtdGV4dFtkYXRhLXRvb2xzZXQtYmxvY2tzLWZpZWxkcy1hbmQtdGV4dD0iZjQ4MDk2YTNmYjE0YmUwYzdkOWRjYzkyNDc1MzBkMjAiXSB7IHBhZGRpbmctYm90dG9tOiAxMHB4OyB9IEBtZWRpYSBvbmx5IHNjcmVlbiBhbmQgKG1heC13aWR0aDogNzgxcHgpIHsgLnRiLWNvbnRhaW5lciAudGItY29udGFpbmVyLWlubmVye3dpZHRoOjEwMCU7bWFyZ2luOjAgYXV0b30gIH0gQG1lZGlhIG9ubHkgc2NyZWVuIGFuZCAobWF4LXdpZHRoOiA1OTlweCkgeyAudGItY29udGFpbmVyIC50Yi1jb250YWluZXItaW5uZXJ7d2lkdGg6MTAwJTttYXJnaW46MCBhdXRvfSAgfSA=