LnRiLWZpZWxke21hcmdpbi1ib3R0b206MC43NmVtfS50Yi1maWVsZC0tbGVmdHt0ZXh0LWFsaWduOmxlZnR9LnRiLWZpZWxkLS1jZW50ZXJ7dGV4dC1hbGlnbjpjZW50ZXJ9LnRiLWZpZWxkLS1yaWdodHt0ZXh0LWFsaWduOnJpZ2h0fS50Yi1maWVsZF9fc2t5cGVfcHJldmlld3twYWRkaW5nOjEwcHggMjBweDtib3JkZXItcmFkaXVzOjNweDtjb2xvcjojZmZmO2JhY2tncm91bmQ6IzAwYWZlZTtkaXNwbGF5OmlubGluZS1ibG9ja311bC5nbGlkZV9fc2xpZGVze21hcmdpbjowfQ==
LnRiLWNvbnRhaW5lciAudGItY29udGFpbmVyLWlubmVye3dpZHRoOjEwMCU7bWFyZ2luOjAgYXV0b30gLndwLWJsb2NrLXRvb2xzZXQtYmxvY2tzLWNvbnRhaW5lci50Yi1jb250YWluZXJbZGF0YS10b29sc2V0LWJsb2Nrcy1jb250YWluZXI9Ijc2YjllMTlhZWJkNzhiNDY3YjA0YzY0YWNmZTMzMTY3Il0geyBwYWRkaW5nOiAwOyB9IC50Yi1maWVsZFtkYXRhLXRvb2xzZXQtYmxvY2tzLWZpZWxkPSJlYzI4OWVkZTg1NjU3MmE3ZDFiMGI2NGE3NjFmYmIxZCJdIHsgZm9udC1zaXplOiAxNnB4O3RleHQtYWxpZ246IGxlZnQ7IH0gIC50Yi1maWVsZFtkYXRhLXRvb2xzZXQtYmxvY2tzLWZpZWxkPSJlYzI4OWVkZTg1NjU3MmE3ZDFiMGI2NGE3NjFmYmIxZCJdIGEgeyB0ZXh0LWRlY29yYXRpb246IG5vbmU7IH0gLnRiLWZpZWxkcy1hbmQtdGV4dFtkYXRhLXRvb2xzZXQtYmxvY2tzLWZpZWxkcy1hbmQtdGV4dD0iZjQ4MDk2YTNmYjE0YmUwYzdkOWRjYzkyNDc1MzBkMjAiXSB7IHBhZGRpbmctYm90dG9tOiAxMHB4OyB9IEBtZWRpYSBvbmx5IHNjcmVlbiBhbmQgKG1heC13aWR0aDogNzgxcHgpIHsgLnRiLWNvbnRhaW5lciAudGItY29udGFpbmVyLWlubmVye3dpZHRoOjEwMCU7bWFyZ2luOjAgYXV0b30gIH0gQG1lZGlhIG9ubHkgc2NyZWVuIGFuZCAobWF4LXdpZHRoOiA1OTlweCkgeyAudGItY29udGFpbmVyIC50Yi1jb250YWluZXItaW5uZXJ7d2lkdGg6MTAwJTttYXJnaW46MCBhdXRvfSAgfSA=
This article was written by Clark C. Griffith

Editor’s note: This article was originally published in “A Palace in the Nation’s Capital: Griffith Stadium, Home of the Washington Senators” (SABR, 2021), edited by Gregory H. Wolf. 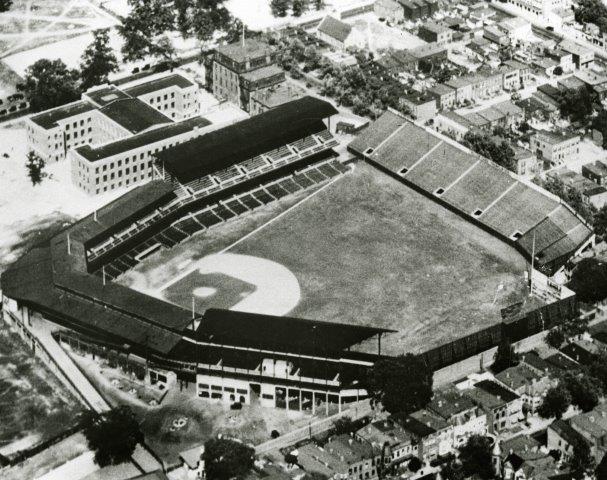 I grew up at Griffith Stadium and have great memories of mammoth home runs by Mickey Mantle, Johnny Mize, and Larry Doby, great catches by Mantle and Jim Piersall, and one monumental popup by Ted Williams.

The Griffith Stadium game I remember most was played between the Philadelphia Athletics and the Senators on the last day of the 1953 season, September 27. The game had little significance in the standings but would establish that the Senators first baseman, Mickey Vernon, was the American League batting champion by one point over the Indians third baseman Al Rosen, who in the Indians’ season finale was playing the Tigers in Cleveland.

As the game between the Athletics and Senators started, the drama was focused on Vernon, who was leading the league with a batting average of .336092175. Rosen was batting .33333333. The difference: .002759382. The batting crown would come down to the last at-bat for both players.

Vernon was batting third for Washington as he did every day; Rosen was leading off for Cleveland to give him a chance for an extra at-bat, and he got it.

The starting pitchers were Joe Coleman, a right-hander, for the Athletics, and Al Aber, a left-hander, for Detroit in Cleveland. As Vernon batted left-handed and Rosen right-handed, they both enjoyed that advantage of facing opposite-handed pitchers and both were playing home games where the backgrounds were friendly and familiar, as was the official scorer.

Rosen led off in the first inning and “singled to second,” and the second baseman was given an error on the throw, allowing Rosen to get to second. Maybe a friendly official scorer! Singles to second with a throwing error are very rare as the ball was fielded and thrown. Rosen was not a fast runner. This sort of play is usually a two-base error but rarely a single and an error, but that’s how it was scored by the official scorer. 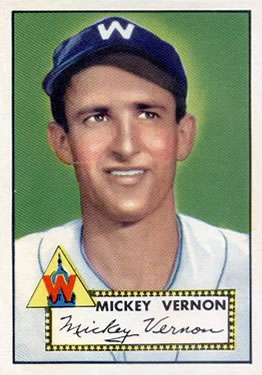 Vernon batted third in the Washington first inning and grounded out to second.

The next at-bat for both was in the third inning. After Joe Ginsberg had doubled and Bob Feller popped out to the catcher, Rosen hit a ground-rule double. At Griffith Stadium, after Bunky Stewart had grounded out to second, Eddie Yost walked, and Pete Runnels lined out to short, Vernon executed a perfect bunt for a single. I remember that bunt as being down the third-base line too far from both the third baseman and the catcher.

In the Indians fifth inning, Feller led off and singled. The next batter, Rosen, hit into a fielder’s choice with Feller out at second base. In Washington, Bruce Barnes pinch-hit for Stewart and popped up to second, Yost doubled to left, and Runnels singled to center, bringing Vernon to bat. Vernon lined a hit to right, scoring Yost. I remember that perfectly stroked ball, as well.

Both players came to bat in the seventh. After Ginsberg flied out to center and Luke Easter struck out, Rosen “singled to the pitcher.” This was another questionable hit, but the official scorer gave him one and was at .336120401. In Washington, Vernon led off and lined out to right. and was at .337171053 This is as close as Rosen would get unless he batted and hit safely again.

As both home teams were trailing, the bottom of the ninth would be played. Rosen was seven batters away from hitting again so he needed one Indian to reach base for that to happen. Vernon was the last batter in the seventh and would bat in the ninth if a Senator got on base. Both players were relying on teammates. Rosen needed that last at-bat but Vernon did not.

The Indians went out in order in the eighth; however, there was some theater at Griffith Stadium. The Washington players knew what was at stake and how to act. In the bottom of the eighth inning, Jim Busby grounded out to short and Jerry Snyder hit an easy fly to the center fielder for the second out, bringing light-hitting catcher Mickey Grasso to the plate. He swung and doubled to left! However, as he stood on second, he knew he’d fouled up the “plan” so the Senators players were yelling at him to take a longer lead. Walt Masterson was standing near me waving a towel at Grasso and yelling, “Get off!” Grasso understood the situation and started taking his lead, looking at the ground as it got longer. Coleman took his stretch. He looked at Grasso and paused, then he stepped off the rubber and threw to second, putting Grasso out to end the inning. Grasso had a look of relief when he ran into the dugout. He’d done his job. Vernon would hit fourth in the ninth, if at all.

In the Indians’ ninth, Rosen would be the fourth hitter. Owen Friend grounded out, but Aber, leading 7-3, walked the number-eight batter, Joe Ginsberg!! Art Houtteman struck out for the second out, bringing Rosen to bat for the last time in 1953. Rosen hit a groundball to Jerry Priddy at third, a defensive replacement for Ray Boone. Priddy, it is reported, fielded the ball cleanly, took it out of his glove, and appeared to be studying it, maybe checking the league president’s name and making sure it was an official American League ball. He then made a soft, looping throw to first that arrived just after Rosen reached the “vicinity” of the bag, but umpire Hank Soar called him out, saying Rosen had “stepped over the bag.” There was no argument from Rosen. Game over. I asked Rosen about the call when we met in the late 1980s and he said it was the correct call. Vernon was the leader, but he might have another at-bat.

In the Senators ninth, Kite Thomas batted for Masterson and lined a hit to left fielder Gus Zernial. Recognizing the problem that it caused, Thomas rounded first and kept running. Zernial threw the ball to second baseman Cass Michaels, who was standing on the bag holding the ball and watching Thomas run toward him. Thomas slid early, never actually reaching the bag, and Michaels tagged him out. That was Kite Thomas’s last major-league appearance.

The next batter, Senators leadoff hitter Yost, known as the Walking Man for his keen eye and ability to get walks, kept fouling off pitches until he popped up to second on a possible ball four. Yost led the league in walks that year with 123. Two outs.

Runnels then came to bat. He would win two American League batting championships in the ensuing years so he was not an easy out. Vernon was in the on-deck circle, as Runnels fouled off several pitches, then grounded out to second. Game over. Vernon was the batting champion!

Vernon’s final average was .337 and Rosen’s was .336. The two players were both giants of their times and made hits in the last game to properly challenge the other as neither was content to back into the championship.

The two games had five batting champions playing, Vernon, Runnels, Rosen, Al Kaline, and Harvey Kuenn, and were played before only 3,740 fans in Washington and 9,579 fans in Cleveland. Vernon and Rosen were among 11 players who batted .300 in the eight-team AL that year, as opposed to only 16 (eligible for batting championship) on the 30 major-league teams in 2018. That’s an inexplicable decline in batting skill over the years. The average for the AL in 1953 was .264 versus only .248 in both leagues for 2018. The general managers say they don’t worry about batting average but only focus on OPS, or On-Base Plus Slugging. If that’s the case, note that the AL in 1953 had an OPS of .733 and the OPS in the major leagues was .728 for 2018. Not much of a difference.

Rosen was the American League Most Valuable Player as he led the league in home runs with 43 and RBIs with 145, and dominated other categories. He was trying to win the Triple Crown, but it eluded him. For modern stat fans, his Wins Above Replacement or WAR was 10.1.

Of note for today’s game, the game in Washington was played in 2 hours 3 minutes and the game in Cleveland in two hours even. The game in DC had 23 hits, 11 runs, and 11 walks. In Cleveland there were 17 hits, 10 runs, and 5 walks. Today such games would take well over three hours to complete. That’s what happens when batters take pitches and swing and miss so much, striking out 41,207 times in 2018.

This was my favorite game at Griffith Stadium and I enjoy sharing that experience with others.

Clark Griffith, the son of former Minnesota Twins owner Calvin Griffith and the great-nephew of former Washington Senators owner Clark C. Griffith, grew up in Washington. He worked for the Twins after graduating from Dartmouth. Griffith served as the Chairman of Major League Properties when it began its marketing/licensing program and was on the Player Relations Committee that developed the player control system that is in force now. Griffith, who lives in Minneapolis, also served as commissioner of the independent Northern League.