In 1914 and for some time before, companies (mainly tobacco and confectionary producers) used trading cards as promotional frivolities to entice the purchase of their products. The subject matter of these sets often included historical figures, birds, fish, and flags. When the Federal League played in 1914 as a self-declared major league, some of these manufacturers took notice and included cards from Federal League teams as part of their offerings.

For example, one opening a Cracker Jack package in 1914 could find players from each of the eight Federal League teams depicted, including future Hall of Famers like Joe Tinker (Chicago Chi-Feds), Eddie Plank and Mordecai Brown (St. Louis Terriers), and Charles Bender (Baltimore Terrapins). Twirler Rube Marquard is pictured on a card representing the Brooklyn Tip-Tops, although he never played for them, an early error. This set is highly prized and elusive; cards of non-star players in poor condition often sell for $100 or more. 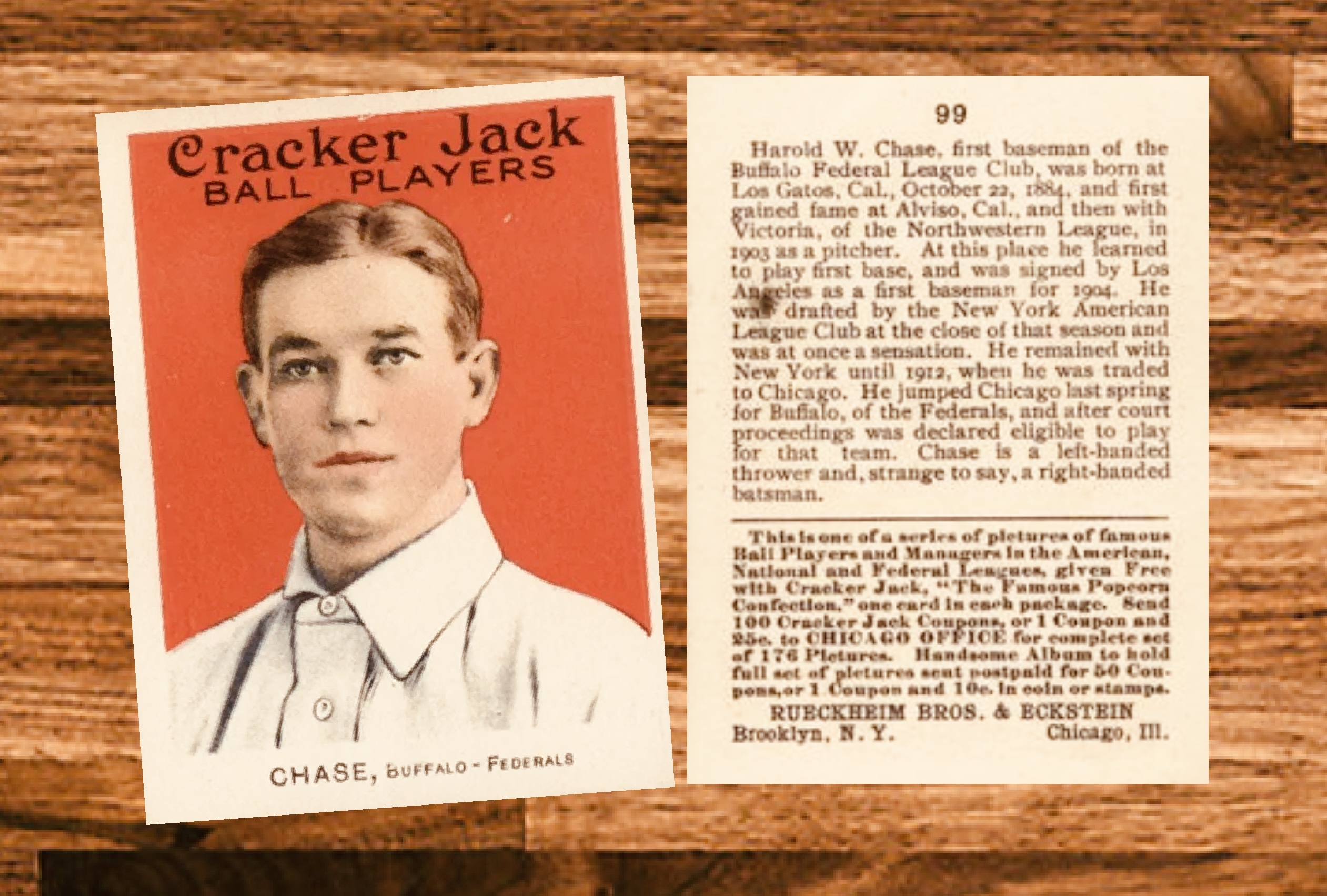 Cracker Jack issued a remarkably similar set in 1915, with the obverse of most cards appearing identical to the 1914 issue. The distinguishing feature for 1915 was that the card backs were printed upside down.  The 1915 set included a card for Hal Chase, the notorious gambler, who had jumped to the Buffalo Federal League team from the Chicago White Sox midseason in 1914 and had prevailed in a lawsuit filed by Charles Comiskey seeking to enforce the reserve clause. The back of Chase’s card even mentions his win in court.

The court in Chase’s case was not fond of the reserve clause: “[a] court of equity insisting that ‘he who comes into equity must come with clean hands’ will not lend its aid to promote an unconscionable transaction of the character which the plaintiff is endeavoring to maintain and strengthen by its application for this injunction. The court will not assist in enforcing an agreement which is a part of a general plan having for its object the maintenance of a monopoly, interference with the personal liberty of a citizen and the control of his free right to labor wherever and for whom he pleases; and will not extend its aid to further the purposes and practices of an unlawful combination, by restraining the defendant from working for anyone but the plaintiff.”

Interestingly, none of the five players pictured as Baltimore Terrapins in the 1915 Cracker Jack set (Charles Bender, Mickey Doolin [misspelled Doolan], Otto Knabe, Frank Smith, or George Suggs) were still active players by the time Federal Baseball was decided in 1922, although Bender did pitch a single inning for the Chicago White Sox in 1925 after effectively retiring in 1917. 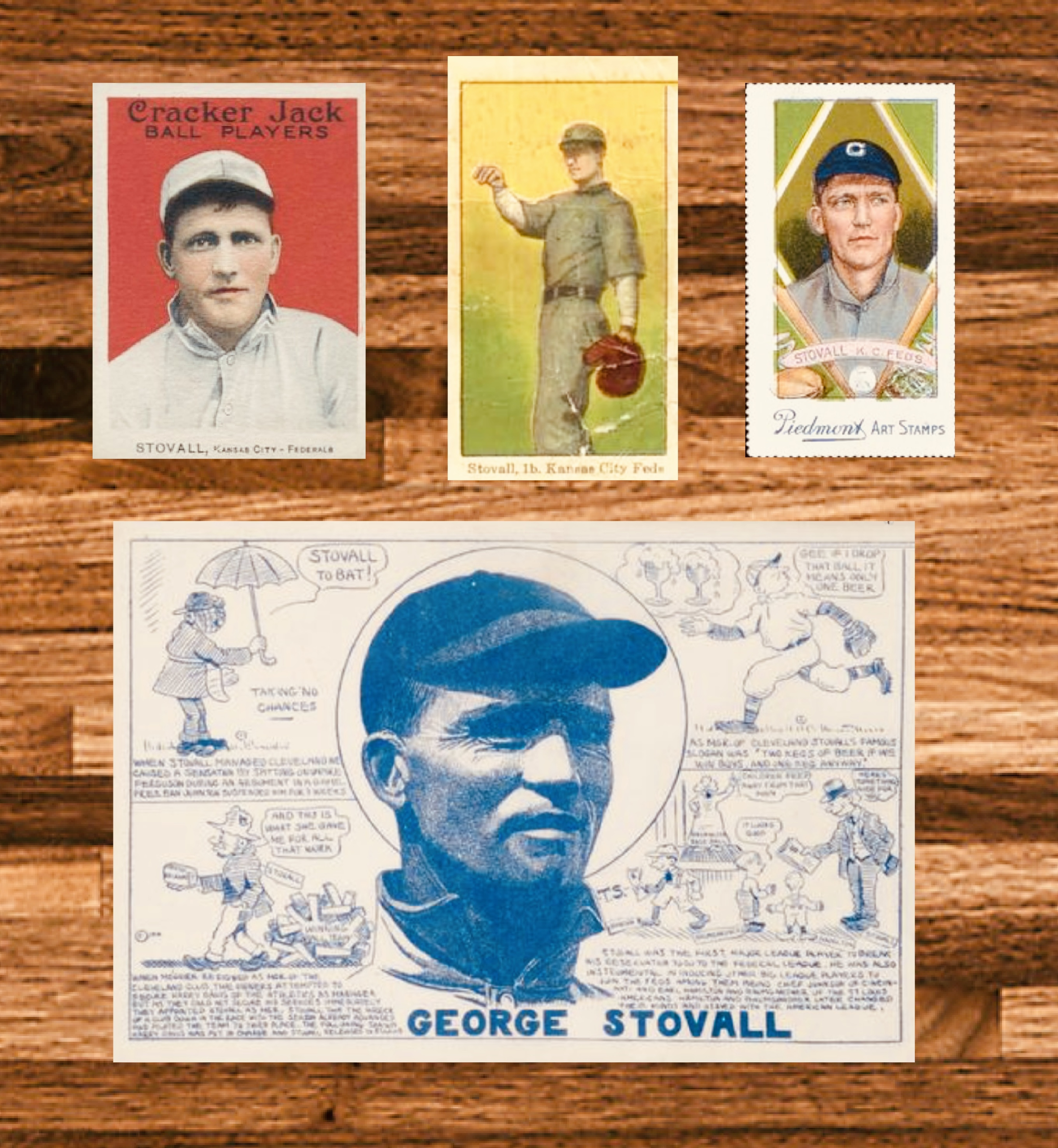 Federal League players were also featured in other sets produced by Piedmont Tobacco Company, General Baking, and E. & S. Publishing Company. Kansas City Packers first baseman George Stovall is the only Federal League player to appear in each of these sets and the Cracker Jack set issued in 1914.

In 2019 the Historic Autograph Company released a 66-card set using the Cracker Jack design. This set not only included 49 cards of Federal League players but ended with cards of the eight Federal League owners, a card of the League Officials (with back text describing the difficulty in getting good umpires), and six cards of the Federal League stadiums.