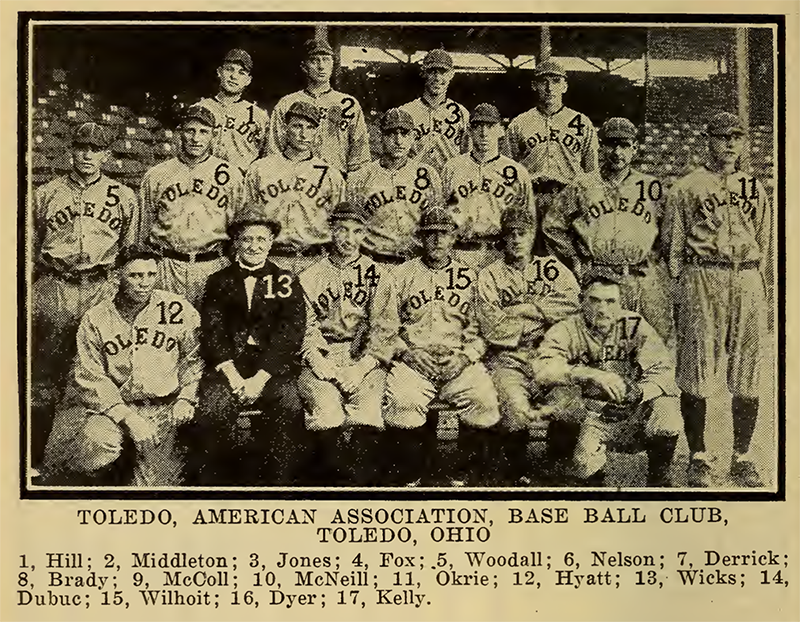 The Toledo Mud Hens became the team’s official nickname in 1896 and is still in use today. (1921 REACH GUIDE)

One of the unique aspects of minor-league baseball is the wacky, creative, and unusual team names. Today you see teams called the RubberDucks, Rumble Ponies, Trash Pandas, and Biscuits, but the trend to bizarre team names isn’t just a recent fad. One hundred years ago, in 1921, there were a number of eye-catching team names such as the Hijackers, Goobers, Furniture Makers, Celery Pickers, and Shipbuilders. Hundreds of teams across the nation brought small towns and communities together to enjoy the great American pastime. Minor-league team names often promote and celebrate their town’s history and heritage. Many teams have come and gone over the last century, but there are still traces of 1921 minor-league team names that can be found throughout sports today.

First, let’s look at the most obvious examples with some of the oldest continuously used minor-league team names. From the nineteenth century there are the Buffalo Bisons (1877), Chattanooga Lookouts (1885), and Toledo Mud Hens (1896). The 1901 season saw the beginning of the Little Rock Travelers (now the Arkansas Travelers) and the Birmingham Barons. In 1902 the Indianapolis Indians were established, predating the use of the Indians name in Cleveland by 13 years.

Durham took the field as the Bulls for the first time in 1913. Other than a few hiatuses and temporary name changes, all these teams have been staples in minor-league baseball history. Each of these teams got its nickname from local ties and became a constant in its community for more than a century. The Bisons and the Indians are direct references to the cities they play in, while the Lookouts are named after Lookout Mountain, near Chattanooga. The city of Birmingham was a major coal-mining community and its ballclub was originally called the Coal Barons, which means wealthy and influential mine owners. Over time the team dropped the word “Coal” and the Birmingham Barons moniker has stuck ever since.

The Toledo Mud Hens nickname was first used informally to refer to the birds at nearby Bay View Park. It became the team’s official name in 1896. The Little Rock/Arkansas Travelers were named after a nineteenth-century folk song. In 1963 the Little Rock Travelers became the Arkansas Travelers, the first minor-league team to name itself after its state. The Durham Bulls became a household name in 1988 when the iconic movie Bull Durham was released, but the team name comes from the city of Durham’s nickname, Bull City. To take it a step further, the city’s nickname dates back to the late nineteenth century when the Blackwell Tobacco Company named its product Bull Durham Tobacco.

While those teams for the most part have been around year after year with the same nickname, a couple of minor-league team names that were around a century ago and eventually vanished recently reappeared. The Salt Lake City Bees took the field for the first time in 1915, appropriately named since Utah is known as the Beehive State. The Salt Lake City franchise was the Bees through the 1965 season, and after two years as the Salt Lake City Giants went back to the Bees nickname for two years, 1969 and 1970. The franchise then went through several nickname changes, including the Angels, Gulls, Trappers, Buzz, and Stingers, but in 2006 it returned to its roots and became the Bees yet again. Eventually the team dropped “City” and became the Salt Lake Bees.

The Baltimore Orioles, Los Angeles Angels, and Milwaukee Brewers played as Double-A teams, the highest classification in the minors, in 1921, and had their team names make their way to the major leagues. Baltimore has a long history of professional baseball and the use of the “Orioles” name (the oriole is the state bird of Maryland), dates back to 1882, when the Baltimore Orioles took the field in the American Association, then a major league.

The Baltimore Orioles spent 20 seasons as a major-league team before being moved to New York for the 1903 season, becoming the team that is now the New York Yankees. In 1904 a new team in the Eastern League moved to Baltimore and assumed the Orioles name. That iteration of the Eastern League eventually became the International League, and the Baltimore Orioles were members until the franchise was moved to Richmond after the 1953 season. The St. Louis Browns relocated to Baltimore for the 1954 season and took on the Orioles name, making Baltimore a major-league city once again.

The Milwaukee Brewers’ team name can be traced back to 1884 in the Northwestern League for a partial season before switching to the Union Association, a major league, to finish the year. Milwaukee is best known for its prominent brewing industry, so the Brewers name is a no-brainer for professional baseball in the city. Before the Milwaukee Brewers became a permanent team in the major leagues, the team name was a mainstay in the American Association, from 1902 to 1952. In 1953 the team moved to Toledo when the National League Boston Braves came to town and became the Milwaukee Braves, playing in the brand-new Milwaukee County Stadium. After the 1965 season the Braves moved to Atlanta and it was another five years before Milwaukee saw professional baseball again. The 1970 season marked the revival of the Milwaukee Brewers moniker when Bud Selig acquired the bankrupt Seattle Pilots expansion team and moved it to Milwaukee where it has played ever since. 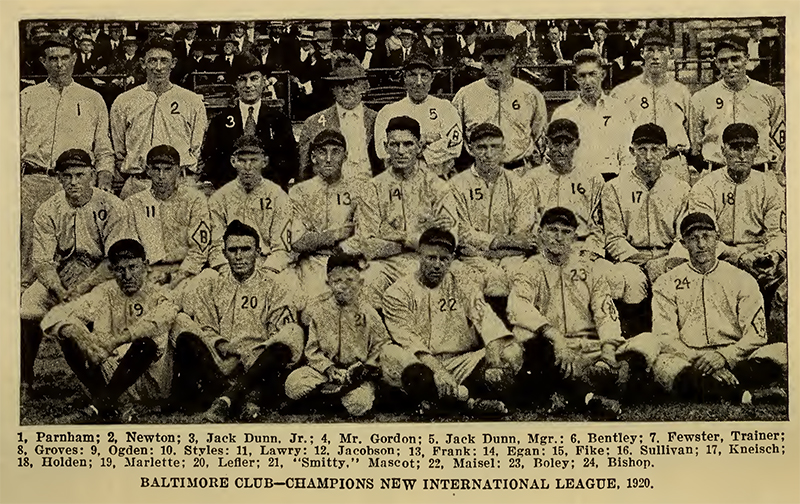 Baltimore has a long history of professional baseball in both the major and minor leagues, and the use of the Orioles name — the state bird of Maryland — dates back to 1882. (1921 REACH GUIDE)

While many of the 1921 minor-league teams that survived the test of time stayed in the baseball circles, some found their way to other professional sports leagues. Today the Toronto Maple Leafs are known best as a hockey team, but in 1899, 28 years before the hockey franchise took on the name, the Toronto Maple Leafs were born as a minor-league baseball team in the Eastern League. The team switched to the International League in 1912 and played every season until 1967 before they were sold and moved to Louisville. The team was nearly bought by the NHL Toronto Maple Leafs, but plans fell through with stadium concerns.

The 1921 season may have been a century ago, but the roots of minor-league baseball run deep in many cities across North America and can still be seen throughout the sports landscape. Its baseball is often a city’s heart and pride, so it is easy to see why so many teams have stood the test of time 100 years later. Passed down from generation to generation, the passion for the national pastime is alive and well.

Honorable mention: The Pittsburg Pirates (no, that’s not a typo) played in the Class-D Southwestern League in 1921 – although this was in Pittsburg, Kansas not Pittsburgh, Pennsylvania. However, the major-league Pittsburgh Pirates outdate this team, having begun in 1882.

Hagerty, Tim. Root for the Home Team: Minor League Baseball’s Most Off-the-Wall Team Names and the Stories Behind Them (New York: Wynwood Press, 1991)