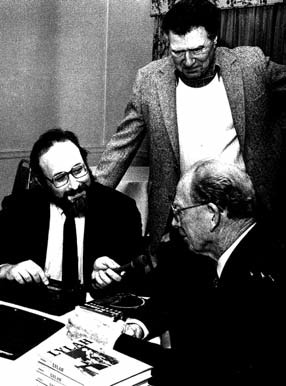 The project had its genesis shortly after Ty Cobb died in 1961. Ritter was teaching finance at New York University and would soon author a classic economics textbook on money and markets. At the same time, he yearned for a more intimate connection with baseball. One of his NYU colleagues, historian Herman Krooss, implored him to seek out baseball old-timers before their stories were lost forever. The timing was right for Ritter, a divorced father with a baseball-loving 13-year-old son, Steve, whom he saw only on weekends. The idea of traveling to interview retired baseball players intrigued both Ritters, especially after they received encouragement from a visit to Bill Veeck, the maverick owner who had just published his irreverent autobiography, Veeck as in Wreck (1966).

Carrying two Tandberg tape recorders and getting two hernias for his effort, Ritter and his son traversed the country for the next few summers. Normally a shy man who did not like to use telephones, Ritter summoned up his courage to call retired players and discovered that most of them were eager, even desperate, to share their stories. “Their grandchildren ran away when they saw them coming because they were afraid of being bombarded by more bull about old-time baseball,” Ritter confided to David Margolick in a New York Times profile in October 2002. With Steve Ritter serving as a stage manager, setting up the tape recorders for the best possible sound in the players’ living rooms, players as diverse as Jimmy Austin, Hans Lobert, and Fred Snodgrass opened up to their visitors.

Every chapter in Ritter’s classic revealed a vivid human personality, all of them united by a love of baseball. John Tortes Meyers, Christy Mathewson’s favorite catcher on the New York Giants of the early twentieth century, expressed his sorrow at the stereotyping of players of American Indian ancestry, who were routinely given the nickname “Chief.” He said he cringed at the killing of Indians in the TV westerns that inundated the airwaves. Hall of Famer Wahoo Sam Crawford from Wahoo, Nebraska, similarly did not like to watch TV, preferring to read the novels of Balzac. He didn’t attend old-timers games because he wanted fans to remember him in his youth. He vividly described the poor reputations of the players of his day. “We were considered pretty crude,” he told Ritter. “Couldn’t get into the best hotels and all that.”

Crawford’s interview has a special place in my heart because it enabled me to meet Larry Ritter. In the spring of 1967, I was a graduate teaching assistant in American history at the University of Wisconsin. In discussing one day the four candidates for president in 1824—John Quincy Adams, Henry Clay, Andrew Jackson, and William Crawford—I mentioned in my typical wiseass manner that Crawford was not related to Wahoo Sam Crawford, who is featured in a wonderful new book, The Glory of Their Times: The Story of the Early Days of Baseball Told by the Men Who Played It. After class one of the students came up to me to tell me he had worked on that book. It was Steve Ritter. A short time later, back in New York, he introduced me to Larry, who until his death in 2004 became one of my cherished friends.

He was a generous man. He split the royalties from the book with all his interviewees, many of whom became lasting friends. Visitors to his New York apartment often were bestowed with copies of Glory or of his other valuable books, including Lost Ballparks (1992), The Babe: A Life in Pictures (1988), and East Side West Side: Tales of New York Sporting Life, 1910–1960 (1998), the story of early-twentieth-century sporting venues in New York City. He is a worthy recipient of a Chadwick award for his pioneering effort at bringing back to life, with passion and nuance, the glory of the times of these former ballplayers.