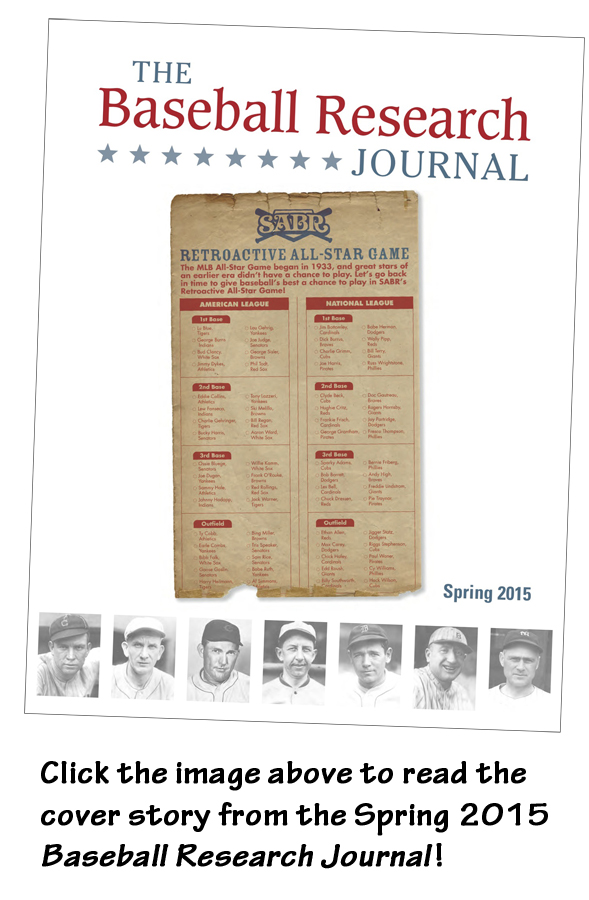 Every baseball fan knows the first All-Star Game was played in Chicago in 1933. But calls for a midseason All-Star contest go back years earlier. For example, check out this article by F.C. Lane from Baseball Magazine in the offseason of 1915-16.

We can’t go back in time to change history and replay those lost potential All-Star Games on the field.

But with a good game simulator and the recent availability of midseason stats going back to 1916, we can arrive at a good idea of who probably would have played in those All-Star Games and how they might have turned out.

That’s what the SABR Retroactive All-Star Game Project was all about.

We used the statistics available at Baseball-Reference.com for the first halves of the 1916 through 1932 seasons, and determined midseason All-Stars for those years. Then using Out of the Park 14, the games were played.

And as they did in 1933, for each season we gave the fans — meaning you — a chance to vote for the All-Star Game starters, including starting pitchers, which is how they did it back then. (Bonus: no designated hitters.)

The box score and the game account, written in the style of the time, were posted on Seamheads.com a few days after the voting ended.

View game recaps, box scores and results from the retroactive All-Star Games below.

This project was created and organized by Chuck Hildebrandt, chair of SABR’s Baseball and the Media Research Committee. Recaps and box scores are compiled by Mike Lynch. For more information, contact Chuck.