Editor’s note: The SABR Salute, first bestowed upon writer Fred Lieb in 1976, was designed as a manner of recognizing the contributions of some of the older members of the Society. Subsequent SABR Salutes appeared in the SABR Membership Directory and honored members who had made great contributions to baseball historical research. Tom Shea (1904-1995) received the SABR Salute in 1990; the following biographical sketch appeared in that year’s membership directory. 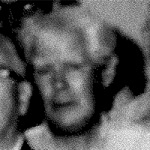 Several years ago Tom Shea declined a proposed SABR Salute on the grounds that he had never done substantive work on the performance side of baseball, the history and stats, etc. We finally convinced him that SABR is much broader than that — that his pioneer work on player biographical data and college affiliation fully qualify him for a Salute.

One example of his remarkable ability to identify obscure old ball players was cited by Joe Simenic in an article in the first (1972) Research Journal: “Those of us who attended the organization meeting of SABR in Cooperstown last August will long remember that walking-talking baseball encyclopedia, Tom Shea of Hingham, Mass. He had many of us spellbound as he recounted in his fine New England twang innumerable anecdotes and personal data of early day players. … When asked what he could remember about Claude Gonzzle, a one-game second baseman with the 1903 St. Louis Browns, supposedly born in Niles, Ohio, Shea promptly said, “Well, you know, the name Gonzzle is a typographical error. His name was actually Gouzzie and he was not born in Niles, Ohio, but played ball there. I believe he was from the Pittsburgh area. If you find a Gouzzie in the Pittsburgh directory, I’m sure he’ll be a relative of the player …”

Now for some biographical details on Tom. The oldest of the 16 original SABR members, he was born on June 7, 1904, in Boston. His father was killed in a train accident the next year and Tom spent his early school years in and around Boston and Providence, Rhode Island. He worked his way through Boston College cataloging library materials. After graduation in 1926, he found employment with Macmillan Publishing Co., and later Nelson Publishing Co., and Encyclopedia Britannica. His job was to sell text books to public school systems and colleges. He lived in Philadelphia (1930-34) and on Long Island (1939-41) when he wasn’t based in Boston. He traveled extensively in an area bounded by Maine, North Carolina and West Virginia.

Tom, whose baseball interest was first sparked at age 8 when an aunt gave him a copy of Pitching in a Pinch and later Touching Second, never paid much attention to player stats but was fascinated by bio demographic data on players, as well as umpires, magnates and other baseball persons. In his traveling salesman period, he gathered printed data in various libraries during the day and gathered verbal histories in various “speakeasies” at night. In each city, when he was not interviewing school principals, he was reviewing as many newspapers as possible and taking rapid notes on player origins, occupations, education/schools, nicknames, and whatever else showed up. He always carried writing materials, including small scraps of paper which were later filed in shoeboxes.

Yes, he did go to some ballgames in this period. In fact, he claims to be the only man alive to see three of Lou Gehrig’s four home runs hit in Philadelphia on June 3, 1932. In mid-game he escorted his date to the ladies restroom and missed the third homer.

In 1939 Tom married Elizabeth Griffith. She had qualities and skills which Tom lacked, one being that she could type. She transformed Tom’s scrawled notes into legible copy. That was a major contribution for Betty Shea which, unfortunately, was not extended to typing his letters. At the end of World War II, Tom and Betty settled in Hingham, Massachusetts, where he engaged in real estate work.

He first met Ernie Lanigan about 1934 and it was through that baseball historian that he later met S.C. Thompson and Lee Allen. In 1946 Tom published Baseball Nicknames, a 25-page illustrated booklet covering the period since 1870. He also began to feed in biographical information to Thompson and Hy Turkin for the ground-breaking player encyclopedia published by Barnes and Company in 1951. He also contributed to the revised editions which followed.

When Lee Allen succeeded Ernie Lanigan as Hall of Fame historian in 1959, he instituted an informal research group to help obtain demographic data in questionnaire form for every person who ever played in the majors. Tom was one of five or six who assisted in this project, the data being used in the original Macmillan Encyclopedia published in 1969. With the death of Allen in 1969, his successor, Cliff Kachline, continued the Hall of Fame research project and expanded the number of members. With the establishment of SABR in 1971, this group evolved into the Biographical Research Committee of SABR. Tom continues as a member of this committee, no longer as an active researcher but one who willingly provides pertinent data from his voluminous files and his still agile memory box.

Tom’s other major contribution is the college affiliation of major league players and particularly those of the pre-WWII era. For example, what school sent the most players to the majors prior to 1900? Tom has a list of 18 from Brown University, site of the 1984 SABR National Convention. In its first newsletter the Collegiate Baseball Committee said: “There is no argument about who is the World’s Leading Authority on college affiliation of baseball players. Tom Shea. No one else is close. Tom’s lifetime of research has been invaluable to the Collegiate Baseball Committee and we salute him with this issue.” It’s difficult to top that committee salute, but let’s do it with a full SABR Salute.