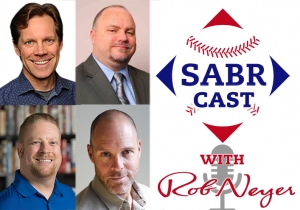 This week, we have a roundtable discussion on baseball’s ongoing sign-stealing scandal as Rob interviews three top writers on the use of technology in the game, the legacy of the Houston Astros, and baseball’s historical relationship with cheating. Our guests are Joe Sheehan, a founding member of Baseball Prospectus and publisher of the popular daily subscription Joe Sheehan Baseball Newsletter; Jason Turbow, author of The Baseball Codes: Beanballs, Sign Stealing, and Bench-Clearing Brawls: The Unwritten Rules of America’s Pastime; and Jacob Pomrenke, SABR’s Black Sox Scandal Committee chair and editor of Scandal on the South Side: The 1919 Chicago White Sox.

Click here or press play below to listen to Episode #43:

Intangibles: Unlocking the Science and Soul of Team Chemistry
By Joan Ryan

Team chemistry, or the combination of biological and social forces that boosts selfless effort among more players over more days of a season, is what drives sports teams toward a common goal, encouraging the players to be the best versions of themselves. These are the elements of teams that make them “click,” the ones that foster trust and respect, and push players to exceed their own potential when they work well together. Team chemistry alone won’t win a World Series, but talent alone won’t win it, either. And by interviewing more than 100 players, coaches, managers, and statisticians, as well as over five years of extensive research in neuroscience, biology, physiology, and psychology, Ryan proves that the social and emotional state of a team does affect performance.