This article was written by Amy Essington 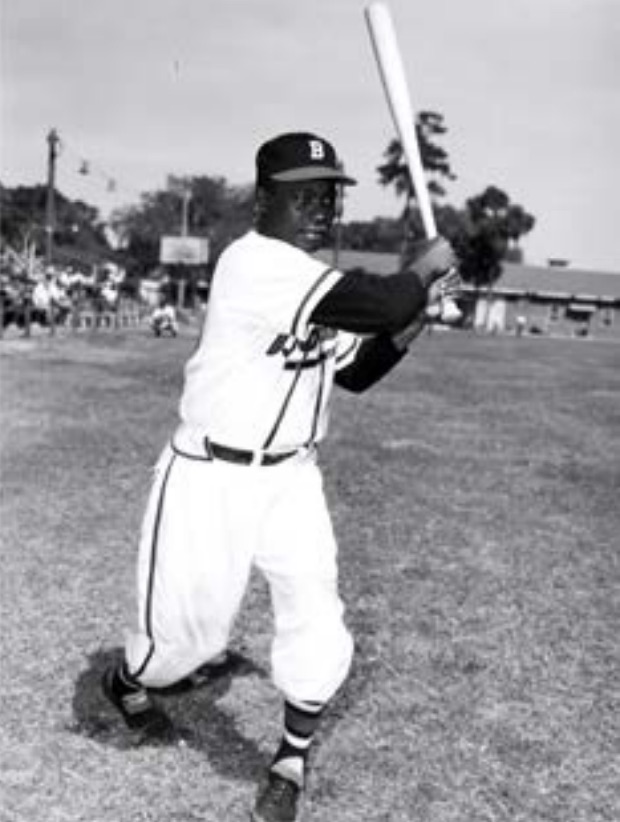 Luis Márquez was a member of the generation of baseball players who integrated professional baseball in the 1940s and 1950s. Márquez played in many levels of segregated and integrated baseball including the Puerto Rican Winter League, the Negro Leagues, the Mexican Leagues, the minor leagues, and the major leagues. He integrated the Portland Beavers of the Pacific Coast League, along with Frank Austin, in 1949. Two years later, he became only the third Puerto Rican to play in the major leagues when he joined the Boston Braves. Although he never found the success in the majors that he had in other leagues, Márquez had a 20-year career in professional baseball.

The nickname “Canena” was bestowed on Márquez him by his mother, Adela, a name by which she had been known. After a truly hot start in a series in the 1944 Amateur World Series in Venezuela, he picked up the nickname “El Fogón Boricua.”4

During his first professional season in Puerto Rico, Márquez batted .361 and tied with Alfonso Gerard for 1944-45 Rookie of the Year honors. The next season, he led the league with 10 triples, tying the league record, and, during the 1946-47 season, he set the single-season home run record with 14 round-trippers, breaking Josh Gibson’s record by one.6 During the 1953-1954 season, Márquez was the Puerto Rican Winter League’s batting champion with a .333 batting average and was voted Most Valuable Player as well. He hit two home runs in the 1957 Caribbean Championship Series.

Over the course of 20 seasons in Puerto Rico, Márquez played in 4,018 games; scored 768 runs; registered 1,206 hits which included 235 doubles, 66 triples, and 97 home runs; and batted .300. His totals of games played, hits, doubles, and runs scored are all league records. He was inducted into the Puerto Rican Baseball Hall of Fame in October 1991.

After his first season of winter ball in Puerto Rico, Márquez joined the New York Black Yankees in 1945. He then played for the Baltimore Elite Giants and the Homestead Grays of the Negro National League in 1946 and the Grays in 1947 and 1948. In 1947 and 1948, Márquez represented the Grays in both the Chicago and New York games of the Negro Leagues’ East-West All-Star Game. In 1947 Márquez led the league in hitting with a .417 batting average, and he had 29 stolen bases. The following season, the second baseman changed positions, moving to the outfield, and also moved to the top of the batting order. James Riley’s Biographical Encyclopedia of the Negro Baseball Leagues says Marquez had a .274 batting average the year his team won the Negro National League pennant and the Negro League World Series in 1948. After the Homestead Grays folded in 1949, Márquez’s contract was transferred to the Baltimore Elite Giants, now of the Negro American League. By the time his Negro League career concluded, he had posted a .335 career batting average.7

The Brooklyn Dodgers’ signing of Jackie Robinson on October 23, 1945, initiated the integration of baseball in the United States and allowed Márquez to move from the Negro Leagues into Organized Baseball. Márquez was one of the hundreds of players who participated in the process of integrating the minor and major leagues in the 1940s and ’50s. This process included sorting out contracts that may or may not have existed with the teams of the collapsing Negro Leagues.

On February 3, 1949, newspapers reported the purchase of Márquez’s contract with the Baltimore Elite Giants by New York Yankees general manager George Weiss.8 Márquez was the first player of color signed by the Yankees, although he was not the player who ultimately integrated the team. He reported to the Newark Bears, the Yankees’ affiliate in the Triple-A International League, at their spring-training camp in Haines City, Florida. Whether the Baltimore Elite Giants or the Homestead Grays owned his contract, however, was in dispute.9 The Grays still made a claim to Márquez’s contract and owner See Posey had offered Bill Veeck of the Cleveland Indians a 120-day option to purchase the contract.

The dispute over Márquez’s contract was revealed in the midst of another contract disagreement between the Yankees and Indians. The Yankees accused the Indians of signing Artie Wilson of the Birmingham Black Barons, who was already under contract with them. The commissioner’s office mediated the two disputes in the spring of 1949. Commissioner A.B. "Happy" Chandler’s decision sent Márquez to the Indians and Wilson to the Yankees. Márquez had been playing with the Newark Bears, the Yankees’ affiliate, and Wilson had been playing with the San Diego Padres, the Indians’ affiliate. In 18 games in Newark, Márquez had one home run, three stolen bases, and a batting average of .246. Even though his preference was to remain in the Yankees organization, Márquez joined the Indians on May 13, 1949, and was optioned to the Portland Beavers of the Pacific Coast League.10

In the United States, Márquez spent most of his baseball career in the minor leagues. He joined the Beavers on May 27, 1949. After he had arrived by plane from New York, he went straight into left field for that night’s game.11 Márquez and his teammate Frank Austin were the first players of color on that team, though Art Pennington of the Chicago Giants later joined the Beavers in July.12 During the 1949 season, Márquez hit .294 in 132 games and led the team with 32 stolen bases. He returned to Portland in 1950, played 194 games, hit over .300, and again led the club in stolen bases. As one of the players who were at the forefront of the integration of baseball, Márquez faced discrimination on and off the field.13 Despite the discrimination, he made strong connections in the PCL. In 1957, when the three-time manager of the Portland Beavers, Bill Sweeney, died, Márquez served as an honorary pallbearer.14

In 1951 Márquez finally moved up to the major leagues when he was claimed by the Boston Braves in the Rule 5 draft prior to the season.15 Márquez had joined the Braves one year after Sam Jethroe integrated it, but historian Adrian Burgos has noted that Márquez was the first Afro-Latino player signed by the Braves, and the second one overall (after Minnie Miñoso)16 His major-league debut came on April 18, 1951, when he entered the game against the New York Giants as a pinch-runner for Jim Wilson.17 Márquez’s first hit, a triple, came on April 19 in the second game of a doubleheader against the New York Giants.18 His first RBI followed the next day in a 2-for-4 performance against the Philadelphia Phillies; Márquez drove in the first run and scored the second in a 2-1 Braves victory. He scored the winning run on Max Surkont’s sacrifice fly after singling, advancing to second base on a sacrifice, and stealing third. Márquez played in 68 games for the Braves in 1951, and he was frequently used as a pinch-runner. He hit only.196 and was successful on only half of his stolen base attempts, going 4-for-8 on the year.

Márquez’s performance merited a return to the major leagues in 1954, and he batted .083 in 17 games for the Chicago Cubs;  after a trade on June 14, 1954, he hit .111 in 14 games for the Pittsburgh Pirates. He had only one base hit for each of the two teams, and the Pirates released Márquez to Toledo on July 14, 1954. Over the course of his major-league career, Márquez played a total of 99 games for three different teams and finished with a .182 batting average and an on-base percentage of .278. He drove in 11 runs, all during his 1951 season with the Braves.

From 1955 to 1958, Márquez returned to the roster of the Portland Beavers, with a 21-game stint with the Toledo Sox in 1955. In 1956 he represented the Beavers on the Pacific Coast League’s All-Star team. During his time as a Beaver, Márquez accepted a Friday the 13th challenge of playing all nine positions in one 1957 game, which he completed by pitching the last three outs of the game.19

In 1961, in Márquez’s 17th year as a professional baseball player, he moved down to Single-A ball for the first time, playing in 19 games with the Williamsport Grays of the Eastern League. That season, he also played 18 games with the Dallas Fort-Worth Rangers.

After his final minor-league stints, Márquez moved south of the border for two seasons, and played for the Mexican League’s Poza Rica Petroleros in 1962 and 1963. He excelled during his first season in Mexico, batting .357 with 28 doubles, 21 homers, and 91 RBIs in 126 games. His performance was not quite as strong in 1963, but he still hit .314 with 20 home runs and 72 RBIs in his final season.20

Márquez’s career included three seasons in the Negro Leagues, 12 seasons in the minor leagues, two seasons in major-league baseball, and two seasons in the Mexican Leagues in addition to his years in the Puerto Rican Winter League. As a player, Márquez had a superstition of touching first or third base while trotting in from the outfield at the end of an inning. He later worked as a scout for Montreal Expos in 1969 and 1970, the first two years of the franchise’s existence.

Following his short stint as a scout, Márquez worked for the Department of Sports in Aguadilla, and also coached both amateur and professional baseball. A first marriage to Lydia Babilonia was short-lived. He then married Olga Asis Rodríguez, who died in 1974. After her death, Luis went to live with and care for his mother. He and Olga had two children, Wanda and Gloria. In 2017, Wanda worked and gave sports talks at the ballpark that bears her father’s name.

At the time of his death, Márquez was working with the Sports and Recreation Department in Aguadilla and in charge of Parque Colón.

His daughter Wanda’s husband, Luis Ramos, shot Márquez twice with a handgun when Márquez confronted his son-in-law about the way he treated his daughter.21 He was shot on the same street where he had been born, Calle Mercado.22 Márquez was pronounced dead at the hospital in Aguadilla on March 1, 1988. He buried in Monte Cristo Memorial Park in Aguadilla. Reportedly because of a number of police “mistakes” of some sort, Luis Ramos was never convicted of a crime and as of 2017 was free in New York.23

The municipal baseball park in Aguadilla, Estadio Luis A. Canena Márquez, is named for the local man who had a 20-year career in professional baseball.24 A bronze statue of Márquez is located in front of the stadium. Although he did not succeed in the majors, Luis Márquez was part of history as a member of a generation that broke down the racial barriers of professional baseball.

Thanks to Carlos Delgado Sr., Pedro Julio Molinary, and Jorge Colón Delgado for assistance with this biography.

4 Email from Edwin Fernandez Cruz to Bill Nowlin, February 20, 2017. A fogón is a kind of hot stove.

6 Van Hyning, 119. The following season (1947-48), Willard Brown, playing for Santurce, shattered the home-run record by hitting 27, which combined the totals from the previous records set by Márquez (14) and Gibson (13).

13  John E. Spalding, Pacific Coast League Stars: One Hundred of the Best, 1903 to 1957 (John Spalding, 1994), 115. Spalding states, "The Coast League was the scene of many fights between black and white players and Marquez was involved in two altercations in his first year in the league in 1949."