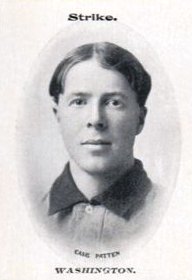 After Prince-Kennedy’s arrest — her father and brothers were also arrested — Dr. R. O. Cross testified at trial that Miss Prince had told him in November 1900 that she was married to Case Patten, but she did not want it known as he might lose his position on the ball team. Reading between the lines, it seems likely she asked the doctor to abort a pregnancy. As with the alleged pregnancy with Kennedy, none was ever discovered. Lulu had subsequently visited Dr. Cross on January 10, 1901, and told him she was now married to Kennedy, not Patten. She claimed insanity, and testified in court that it was Kennedy who had urged her to tell the doctor she was married to Patten. Her brother Albert, out on bond, was a “traveling mandolin player” who came by and gave concerts to Lulu in the jail. Brother Will denied in court that he had ever exercised mesmeric powers over anyone; he also denied that he had been a prizefighter. Father Prince ran a pool hall.

Patten had his quirks. In 1904 he had a pet white rat with pink eyes he tried to train to sit on his shoulder. Despite this, other teams made overtures toward acquiring him, but Washington held onto him. The Post repeatedly dubbed him the “willing worker”, frequently capitalizing the phrase as though it were his name, lionizing him for his readiness to pitch two games in a series if need be. His won/loss total was always better than his team’s. Even his 11-22 year in 1903 was better percentagewise than Washington’s 43-94 record.

On July 22, 1903, he even pitched in to umpire a game. The scheduled umpire, Jim Hassett, suffered “a biff on the ear” in the July 20 game and so one player from each team was designated to officiate: Ossee Schreckengost from Philadelphia and Patten from Washington. The Athletics won, 3-1. These were difficult years, and Patten accomplished something unique in American League history: from 1903 through 1905 he had three consecutive 20-loss seasons. He was 11-22, 14-23, and 14-22. He maintained a decent earned run average throughout — 3.60, 3.07, and 3.14, though in each case he was about a half a run per inning above league average.

Patten was a 19-game winner in 1906, with a 2.17 ERA, but seemed to falter a bit in late June and early July as the 1907 season wore on and by the end of July the Post was suggesting that manager Joe Cantillon give him a couple of weeks’ rest. On August 11, he was included in a large feature on Washington players who would not be back in 1908. A change in scene would pay off for him, the paper said. He was not expected to be with the team come spring training 1908. He was indeed brought back, though, and was used infrequently, finally being traded on May 31 to the Red Sox for lefthander Jesse Tannehill. Some thought that both pitchers could benefit from the deal. Neither did all that much after the trade, though reports that Tannehill was suffering from malaria were far from encouraging. At least he could hit some, remarked the Post.

Johnson proclaimed that New York management had 48 hours to change their minds, so Patten was indeed back with Boston, who clearly didn’t want him. They held onto him for about three more weeks, but he was apparently unable to get into shape, so they released him unconditionally on July 10. After 232 decisions with Washington, he was 0-1 with Boston. It was a sad and sudden ending to a good career, but his major league days were over and he admitted he didn’t know what he’d do next.