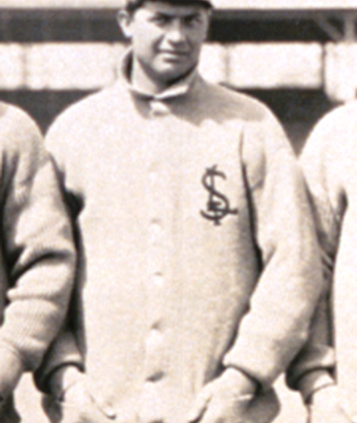 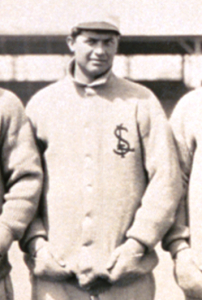 Stout left-hander Ed Zmich won only one big-league game, but for a few weeks in the summer of 1910, the Class-D hurler caught the attention of the baseball world, resulting in an unusually fierce bidding war.

Edward Albert Zmich was born on October 1, 1884, in Cleveland. His father, Max, emigrated from Germany in 1873 and married that same year Rosa Kronenbitter, herself a first-generation German-American, and together they raised seven children, five daughters and two sons, born between 1874 and 1890. Two other children died in childbirth; Edward was the fourth-oldest.1 The elder’s job as carpenter enabled the family to live modestly in their own home in the Brookside neighborhood of west Cleveland. According to US Census reports, young Ed completed six years of formal schooling.

A robust and rugged youth, Ed began playing baseball on the sandlots and lakefront diamonds in the rapidly expanding industrial city on Lake Erie. By the age of 20, the 6-foot, 185-pound southpaw had a reputation as a hard-throwing moundsman. He graduated to the competitive semipro league, and hurled for Cohen’s Cutters in 1907 when he caught a break. According to one story, Jimmy Austin, third baseman for the Dayton Veterans of the Class-B Central League, who resided in Cleveland in the offseason and who knew Zmich, introduced the hurler to Angus Grant, player-manager of the South Bend Greens in the same league.2 Green offered Zmich a tryout in 1908, and thus commenced the southpaw’s career in Organized Baseball.3 Suffering from bouts of wildness, his career-long bugaboo, Zmich lasted less than a month with the club before he was farmed out to the Danville Speakers in the Class-D Eastern Illinois League.4 His statistics are unknown in a league racked by financial difficulties that caused it to disband on August 20 with the Speakers (themselves forced to relocate to Staunton in mid-July) declared the champions.5

In the offseason, the Grand Rapids Wolverines of the Class-B Central League acquired Zmich.6 The left-hander’s lack of control led to his trade after a brief look-see to the Marion Diggers of the Class-D Ohio State League for catcher Charles Lushing.7 Zmich emerged as a workhorse, leading the circuit with 21 victories (15 defeats).

The turning point in Zmich’s baseball career was 1910. Back with the Diggers, Zmich proved to be the league’s best pitcher, and according to the sportswriter S.E. Gooden of  Marion Daily Mirror, “had been followed constantly” by big-league scouts beginning in mid-June.8 Included were scouts from the Cincinnati Reds and Dick Padden of the Washington Senators, as well as Heinie Peitz of the Louisville Colonels of the Double-A American Association; however, the St. Louis Browns and their scout Billy Doyle seemed to have an inside track. “Zmich is just what the major league clubs are looking for,” opined the Portsmouth Daily Times, “a big southpaw with the goods. He has control, speed, good curves and above all a good head. His batting is also a valuable asset.”9

Zmich responded to the additional pressure, tossing a no-hitter in the second game of a doubleheader against the Newark Newks on July 4, winning 6-2, seemingly unperturbed by his teammates’ five errors leading to the pair of unearned runs, and also drove in three runs himself.10 That performance drew even more scouts to the small Ohio towns to watch the league’s pitching sensation.

Diggers skipper Joe Lewis decided to deliver the knockout blow and summoned all interested parties to Lancaster, where Zmich would be on display on Sunday afternoon, July 17, and announced that the club would finally accept an offer for its prized twirler. The scene in the small town of about 13,000 residents, 30 miles south of Columbus, must have been a who’s who of bigwigs in baseball. Among those eyeballing Zmich were Hughie Jennings, skipper of the Detroit Tigers, and Pittsburgh Pirates scout Howard Earl. Browns owner Robert Hedges joined Doyle and scouts from at least four other teams.11 A new entry in the Zmich sweepstakes was the St. Louis Cardinals, who sent player-skipper Roger Bresnahan into the fray. In a fairy-tale performance, Zmich blanked the Lanks, 3-0, fanning nine and driving in two runs,12 leading to an old-fashioned bidding war that took place that evening at the Neil House Hotel in Columbus. One can imagine the cigar-smoke-filled room, where bidders dropped out one by one. Finally there were two left standing, and when Hedges bowed to Bresnahan, the Cardinals emerged as the unlikely victor with an offer of $4,000, considered then to be the highest bid for a player in league history.13

Zmich reported immediately to the Cardinals, a floundering franchise that had posted just two winning seasons since joining the NL in 1892 and had never finished higher than fourth (and had reached that just once). Team owner Stanley Robison cautioned fans not to expect much from either Zmich or pitcher Earl Hennis of the Central League Terre Haute Stags, whom the club had also acquired on Bresnahan’s two-day scouting spree. “The signing of young players is a lottery,” quipped Robison. “It doesn’t appear to make any difference what price is paid for the players. If they make it, you’re lucky.”14

Not a ringing endorsement from your boss, but then again, Zmich was attempting a monumental jump from Class D to the big leagues. Six days after his acquisition, Zmich took the mound for the Cardinals on July 23 at Robison Field, the rickety wooden ballpark located at the intersection of Vandeventer and Natural Bridge Avenues on the north side of the Gateway City. According to the St. Louis Post-Dispatch, Zmich’s debut “proved anything but a howling success,” as the southpaw surrendered five runs on four hits, issued four walks, threw a wild pitch and balked in just three innings to be collared with the 9-2 loss against Christy Mathewson and the New York Giants.15

Zmich’s season didn’t get much better for the Redbirds who ultimately finished in seventh place with a pitching staff that ranked last in the majors in team ERA (3.78). After hurling five innings of one-run relief in the Redbirds’ 9-4 loss to the Giants at the Polo Grounds, where he collected what proved to be his first and only big-league hit (a single off Hooks Wiltse), Zmich earned his third start of the season and tossed his maiden complete game in the second game of a twin bill against the Boston Doves at the South End Grounds in the Hub City on August 15. “Zmich suffered a terrific bombardment,” opined the St. Louis Star and Times, adding, “Bresnahan evidently felt disposed to let Zmich get a good hard bumping.”16 The Doves clobbered Zmich for 14 hits; the hurler also uncorked three wild pitches and hit a batter, resulting in an 8-1 drubbing. Zmich saved his “best game” for his final appearance of the season, wrote the Star and Times, yielding just five hits, though he walked seven in a complete game in the second contest of a doubleheader against the Giants at the Polo Grounds on September 20.17

Zmich had the misfortune to be matched up against skipper John McGraw’s ace, “Big Six” Mathewson, who punched out 10 and emerged victorious, 3-2. Zmich caused a minor brouhaha when he publicly alleged that the pitcher’s mound at the Polo Grounds was doctored and saturated with oil (a claim that others had made before); and that Bresnahan, himself a former Giant, knew that, and therefore had threatened to levy a $10 fine on any Redbird hurler who tried to rub the ball in the dirt to get a better grip on the ball. Furthermore, Zmich claimed that the Giants hurlers were unaffected because they carried rosin.18 With or without oil, Zmich lost all five of his decisions, posted a 6.25 ERA, and walked almost as many batters (29) as innings pitched (36).

When the Cardinals arrived in New Baden, Indiana, in February 1911 to immerse themselves in the hot mineral springs and prepare themselves for spring training there, skipper Bresnahan still believed that Zmich could develop into a starter.19 Lumped together with three other southpaw recruits (Bunny Hearn, Lou Lowdermilk, and Earl Hennis), Zmich vied to replace the top left-handed starter, 14-game winner Johnny Lush, who had abruptly retired from baseball even though he was just 24 years old. In the end, none in that trio broke through. On April 25 Zmich made his season’s debut, hurling three-hit ball over seven innings of mop-up duty, yielding three runs against the Pittsburgh Pirates at Robison Field. Despite the relatively effective outing, Zmich pitched only one more time before appearing in both games of a doubleheader on June 1 against the Cincinnati Reds in St. Louis. With the Cardinals trailing 5-0 after eight innings, Zmich pitched a scoreless ninth, though he hit a batter, in what appeared to be another mop-up outing, but the Redbirds stormed back to score six runs to win, giving Zmich his first big-league victory. He hurled the final 3⅔ innings, yielding two runs in the second game, a 6-4 loss. Two days later, the Cardinals released Zmich to the Louisville Colonels with the expectation that he’d be recalled.20

Zmich’s tenure in the American Association lasted only three weeks before the club turned him over to the Chillicothe Infants of the Class-D Ohio State League, where he went 10-7.

Zmich’s future in baseball was in doubt as spring training began in 1912. He did not report to the Infants, leading one sportswriter to wonder if he was “still on the docks in Cleveland.”21 Still the property of the Cardinals, Zmich was sold to the Chicago White Sox in April and assigned to the Springfield (Illinois) Senators. Zmich’s stint in the Class-B Three-I League lasted about two months, during which he posted a 2-2 slate and logged 57 innings before he was released in late June.22

At the age of 27, Zmich’s career in professional baseball was over just as his brother George’s career seemed to commence. In 1913 George, a shortstop, was signed by Mike O’Neill, skipper of the Utica Utes of the Class-B New York-Penn League.23 [It does not appear that George ever played a game in the minors.

Ed Zmich was a lifelong resident of the west Cleveland neighborhood and never married. He held down various jobs, including dock worker, cook, and bartender. According to the 1940 Census, he lived with three of his siblings (also unmarried) at 2118 West 59th St., which appears to be the same address where he was born. [He was born at 41 Purdy Street; in 1906 that street was renamed 59th Street].

Zmich died at the age of 65 on August 20, 1950. The cause was coronary thrombosis. He was buried at St. Mary’s Cemetery, where his parents had also been interred.