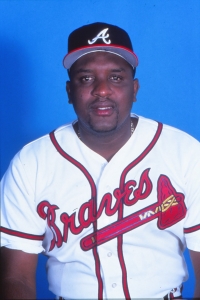 José Galvez Oliva was born on March 3, 1971, in San Pedro de Macoris, Dominican Republic. He was signed as a shortstop by the Texas Rangers on November 12, 1987 and was assigned to the Gulf Coast League Rangers where he spent the 1988 season. He appeared in 27 games and hit .214. He was promoted to the Pioneer League for 1989, and again played mostly shortstop for the Butte Copper Kings. Oliva’s stats showed a player trying to adjust to baseball in America: He was second on the team with 15 errors and had the second-worst batting average on the team (.211). Oliva was in the bottom half of the team for almost every stat, but the Rangers still wanted to see what he could do at the next level.

Oliva spent 1990 with Gastonia of the low-A South Atlantic League. He led Gastonia with 38 errors as the starting shortstop and played a bit of third base too. Oliva’s bat showed a bit of power with 10 home runs, and 52 RBIs, but he led the team in strikeouts.

Moved up again in 1991, Oliva played for Port Charlotte of the High-A Florida State League. He switched positions and became the starting third baseman. Oliva began to show some of the power that would be his calling card in his major-league career when he led the league with 14 home runs.

Oliva was promoted to Double A for 1992 and played for the Tulsa Drillers. He showcased a more mature game, hitting .270 with 16 home runs, and was voted the best defensive third baseman in the Texas League, despite 28 errors and a .915 fielding percentage. The solid minor-league track record, along with his age, forced the Rangers to protect Oliva before the 1992 expansion draft that brought the Colorado Rockies and Florida Marlins to the major leagues; however, he was traded less than a month later. The Rangers sent the 21-year-old Oliva to the Braves for left-handed pitcher Charlie Leibrandt and minor-league pitcher Pat Gomez. The Braves needed to move Leibrandt’s salary in order to sign reigning Cy Young Award winner Greg Maddux.

Oliva spent 1993 with the Triple-A Richmond Braves, and was being groomed to take over in Atlanta for third baseman Terry Pendleton after Pendleton’s contract expired in 1994.1 This was due in large part to Oliva’s defensive showing in 1992, but also because Richmond had a shortstop in young Chipper Jones. Oliva showed power by hitting 21 home runs and drove in 65 runs, but his average struggled to top .200 all season. He was hitting .204 through early July, but was able to raise his average to .235 by the end of the season.

Oliva entered the 1994 season with uncertainty. He was still viewed as a top prospect in the Braves’ system, but his position was not firmly set. Atlanta’s top prospect, Chipper Jones, was going to play at least some third base because he was blocked at the major-league level by shortstop Jeff Blauser.2 Jones tore his ACL during spring training and missed all of the 1994 season. Oliva responded to the opportunity to have third base to himself by showing why he was considered to be a top prospect. In his first 40 games in 1994 he batted .286. By late June Oliva’s average had dropped to .260, but he still showed power with 17 home runs. This was enough for the Braves to call him up when Terry Pendleton was forced to the disabled list with a strained back.3

Oliva’s first start came on July 6, 1994, against the Pittsburgh Pirates. In his second at-bat he led off the bottom of the fifth with a single to center for his first major-league hit. He collected two more hits in his second start, on July 9, against the St Louis Cardinals. The next day Oliva started again. In the bottom of the second, on a 2-and-2 count, Oliva went deep against Allen Watson for his first major-league home run. In his first eight major-league games, Oliva hit .455 with four home runs, including two against the Florida Marlins on July 16. By the time he was sent back to Richmond at the end of the month, his average had dropped to .288. But Oliva had made a strong impression on the Braves. “He had a much wilder swing when I saw him before. He’d lift his front foot way up and missed a ton of pitches. Now he’s got a softer foot and great coverage. He’s a different hitter,” manager Bobby Cox said.4 Oliva was sent down due to the Braves’ need for a right-handed leadoff batter against left-handed pitchers. Mike Kelly, who had been sent down at the end of July, fit the bill, and took Oliva’s spot on the roster. Oliva helped Richmond win the International League championship with a 3-0 sweep of the Syracuse Chiefs.

Despite the strong performance, Oliva again faced uncertainty entering the 1995 season. The Braves had to make tough decisions. The team released Terry Pendleton, which opened up a starting position. If the Braves brought back shortstop Jeff Blauser, then Chipper Jones would most likely move to third base. If Blauser moved on in free agency, Jones would most likely play shortstop and Oliva could play third base. The players strike and lockout further complicated the situation, since teams could not sign players until an agreement was reached.

Oliva had a scary health issue to start 1995. He was hospitalized for two weeks for a liver infection. Oliva had complained of stomach and back pain while on a promotional tour. Doctors in the Dominican Republic diagnosed him with food poisoning and gave him treatment. The pain persisted into winter ball, when Oliva had trouble swinging the bat. Braves team doctor David Watson ran tests that showed the liver infection. Oliva was immediately hospitalized.5 He recovered, and had a strong spring to make the club as a backup infielder; Chipper Jones was named the starting third baseman. During the shortened spring training, Oliva saw time at first base as well. But he was not happy with the demotion to bench player, and his attitude was reflected in his play. During one spring training game, catcher Javy Lopez threw to Oliva after a strikeout; Oliva was not paying attention and was struck by the ball. During another game, he failed to run out a ground ball. Oliva had told media prior to the game that he was unhappy with the decision to play Jones at third over him.6

Oliva got his chance at third, however, when a thumb injury to Ryan Klesko forced Chipper Jones to left field. In his first eight at-bats, Oliva hit two home runs. His confidence in himself was evident. “If I play every day this year, I guarantee I win rookie of the year,” Oliva said.7 He also explained his rocky spring: “This year in spring training, they didn’t give me the job. I was real down in spring training, felt real bad. But you wait for your time.”8

Oliva failed to make the most of his time. He hit for power during the short stretch (four home runs, three doubles), but failed to hit for average (.189). His defense was also weak; he had six errors in nine games. Oliva attributed his numbers to the lack of consistent playing time. “If I play consistently, I’ll put up good numbers,” he said. “I was struggling defensively, six errors in nine games, but that’s not me. It wouldn’t be that way all year if I played. It’s a concentration problem, worrying about going to the bench. I try to be so perfect, I mess up.”9 Oliva stayed with Atlanta largely because he was out of minor-league options. The Braves would have had to put Oliva on waivers if they wanted to send him down. Eventually, the Braves solved the issue by trading Oliva to the Cardinals for minor-league outfielder Anton French. The Cardinals were desperate for some power and, as Bobby Cox later said, Oliva had “more than big-league power. He’s got major-league power.”10

Cardinals manager Mike Jorgensen did not know where to play Oliva. “I don’t know if he can play first base or the outfield or not, but we’ll find out,” Jorgensen said.11

Oliva failed to make a good first impression on his new team. He was given three days to join the Cardinals in order to give the club time to make a roster move, but still arrived late to the Cardinals’ series opener in Cincinnati and was removed from the lineup.12 The woes would continue onto the field as well. Oliva hit only .122 with two home runs for the Cardinals.

Despite the poor numbers in a limited sample, the Cardinals re-signed Oliva to a one-year deal before the 1996 season. But Oliva never received the chance to make his mark on the club. Early in spring training, he dove for a ball while playing first base and tore ligaments in his thumb. He sat out a few weeks but could not put up good enough numbers to make the team. He was sent to Triple-A Louisville, where he hit 31 home runs and drove in 86 runs. Although he was not the starting third baseman, Oliva put up strong defensive numbers as well; he made only four errors at third and two at first base.

The Cardinals decided to not resign Oliva after the season, but the Mets offered a minor-league deal, which Oliva accepted. He was excited by the prospect of playing for the Mets. “My dream since I was a little kid was to play in New York. Maybe my dream will come true,” Oliva said.13 Just as in seasons past, Oliva did not show enough to warrant a big-league spot, and he was optioned to Triple-A Norfolk during spring training. Oliva caught the eye of scouts from the Chinese Professional Baseball League and signed with the Brothers Elephants of Taipei.

Oliva verbally agreed to a minor-league deal with the Seattle Mariners on December 19, 1997, and was expected to officially sign the contract on December 22.14 In the early morning of December 22, Oliva and a female passenger were involved in a car accident near Santo Domingo. The convertible he was driving hit an object in the road, and Oliva was thrown from the vehicle. His uninjured passenger waited an hour for help to arrive while Oliva’s condition worsened. He suffered multiple severe wounds to his head, throat, and lungs. The injuries were too much to overcome, and Oliva died shortly after arrival at a hospital.15 He was 26 years old.

In addition to the sources cited in the Notes, the author consulted baseballalmanac.com and Baseball-Reference.com.