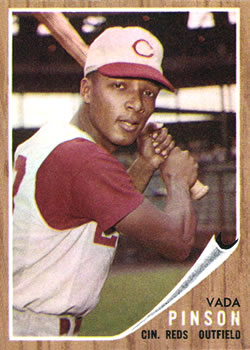 Vada Edward Pinson, Jr., star center fielder for the Cincinnati Reds in the 1960s, was born in Memphis, Tennessee, on August 11, 1938. When he was seven, his family moved to Oakland, California. His father found work as a stevedore at the Bay Area docks, while his mother did domestic work. In 1952, Pinson enrolled at McClymonds High School. He developed an interest in music and became a trumpet player in the school band.

Apparently, Pinson was so talented musically that he seriously considered making the trumpet his career choice. However, the legendary coach at McClymonds, George Powles, who had been instrumental in developing Pinson’s future major league teammates Frank Robinson and Curt Flood as well as basketball superstar Bill Russell, recognized Pinson’s raw athletic ability. Powles helped the youngster to understand and realize his potential as a professional baseball player.

Pinson was offered a $4,000 bonus and signed with the Cincinnati Reds before his eighteenth birthday. He required only two minor league seasons to reach the majors. At Wausau in the Northern League in 1956 he hit .278 in 75 games. The next year, with Visalia in the California League, he hit .367 with 20 home runs, 97 runs batted in, and 209 hits in 135 games.

In the spring of 1958, Pinson impressed everyone in the Reds’ spring training camp who saw him play. Timed at 3.3 seconds from home plate to first base, he was compared to Mickey Mantle, Hank Aaron, and Willie Mays. He had speed, great wrists, exceptional power, great instincts, and he played center field with hustle and grace.

“I came to camp with the intention of making the club,” Pinson told The Sporting News that spring. “But if I don’t make it, I won’t be too disappointed.”

Pinson was so quiet that spring that coach Jimmy Dykes believed he was Hispanic. Dykes spoke to him in gestures and broken English until Pinson finally said, “Mr. Dykes, if there is something you want me to do with my stance, please tell me.” Dykes nearly fell over.

Pinson debuted with the Reds at Crosley Field on Opening Day, April 15, 1958. The rookie managed one single in five at bats against Robin Roberts and Ray Semproch as Cincinnati lost to Philadelphia, 5-4. Two days later in Pittsburgh, Pinson lined a grand-slam homer off Ron Kline that propelled the Reds to a 4-1 victory for Bob Purkey. A great first memory, Pinson’s blast nearly ruined his career.

“Probably the worst thing that happened to me was hitting that homer against Pittsburgh,” Pinson said one year later. “It won the game but didn’t do me any good. I started thinking of myself as a slugger.”

Pinson’s batting average slumped to .194 in mid-May, and he was sent to Seattle of the Pacific Coast League. Back in the minors, he rebounded with a robust .343 season in 124 games. This earned him a September call-up where he hit .412 in a dozen games and won a permanent job in center field for the Reds.

Milwaukee Braves manager Fred Haney was sufficiently impressed with Pinson to suggest that while Hank Aaron was the top player of the day, Pinson was the star of the future. Wally Moses, batting coach for the Reds, agreed.

Teammate and future Hall of Famer Frank Robinson recalled, “I finally made a close friend in baseball when Vada Pinson joined the Reds in 1959.” Robinson and Pinson became roommates on the road and rented apartments near each other. “We were always together, Vada and I. We roomed together, lockered and dressed side by side…We usually ate breakfast and dinner together. I had never been very close to anyone before, and it felt good.”

Despite Pinson’s outstanding 1959 season and another solid season in 1960 (20 home runs, 61 runs batted in, and a .287 batting average, plus another All-Star game appearance), the Reds remained a second-division ballclub.

In 1961 general manager Bill DeWitt strengthened the team through several successful trades and Cincinnati won its first National League pennant since 1940. Most Valuable Player Frank Robinson batted .323 with 37 home runs and 124 runs batted in. Pinson hit a career-high .343. with 16 home runs, 87 runs batted in, and a league-leading 208 hits. He was runner-up in the NL batting race behind Pittsburgh’s Roberto Clemente, who batted .351.

Joey Jay (21-10) and Jim O’Toole (19-9) were the pitching aces and the Reds, managed by Fred Hutchinson, won the pennant by four games over Los Angeles. Pinson finished third in the MVP balloting, behind a pair of Hall of Famers, Robinson and the Giants’ Orlando Cepeda.

In the World Series that October, the Reds went up against one of the most powerful New York Yankee teams in history. Led by Roger Maris‘ record-breaking 61 home runs, the Bronx Bombers belted 240 homers, the most ever up to that time.

The Yankees went on to take the Series easily, 4 games to 1. Pinson’s only World Series was disappointing; he finished with just two hits in 22 at bats, a double off Luis Arroyo in the Reds’ lone victory in Game 2 and a single off Bud Daley in the Game 5 finale.

Pinson posted solid power numbers in 1962 (23 homers and 100 RBIs), but his batting average fell 51 points to .292. This prompted Cincinnati sportswriter Earl Lawson to write, “Pinson would hit .350 if he would only bunt once in a while instead of going for homers.” The normally mild-mannered Pinson angrily took a swing at Lawson. Lawson eventually dropped the charges, but only after swearing out a warrant for Pinson’s arrest. Pinson considered the incident the most embarrassing moment of his career.

The Reds finished in third place in 1962, 3½ games behind pennant-winning San Francisco.

Pinson rebounded in 1963 to achieve perhaps his greatest all-around season, with an OPS of .861, fifth in the league. He led the NL in hits with 204 and triples with 14. Pinson slammed 22 home runs and drove in a career-high 106 runs, while batting .313 and stealing 27 bases. But the Reds fell to fifth place.

In his autobiography, Extra Innings, Frank Robinson remembered, “some writers were reporting that Vada Pinson and I formed a ‘Negro clique…that is gnawing at the morale of the club.’…What nonsense. Certainly Vada and I had been virtually inseparable for five years, but often duos and trios on the team palled around together, and they weren’t called clique members.”

In 1963, when Pete Rose was a cocky rookie taking the job of popular second baseman Don Blasingame, Robinson and Pinson welcomed him to the Reds when no one else would. Robinson recalled, “I saw that Pete Rose was being ostracized by most of my teammates…I asked Pete one night if he would like to join Vada and me for dinner. No other players warmed to Pete all season, so Vada and I became his friends and showed him the ropes around the league.”

The Reds battled for first place throughout the 1964 season, finishing in a second-place tie with Philadelphia. The Phillies blew a 6½ game lead with two weeks remaining in the season by dropping 10 games in a row. Both teams finished one game behind the pennant-winning St. Louis Cardinals. Pinson hit .266 that season with 23 homers and 84 RBIs.

The 5’11” 181-pound left-hander was a rare combination of speed and power. In five seasons, Pinson had at least 20 homers and 20 stolen bases in the same year. For his career he was successful on 71 percent of his stolen base attempts. Although less than 18 percent of his homers came off left-handers, Pinson’s top target among pitchers was Giants’ southpaw Mike McCormick with seven. Pinson’s most difficult mound foes were Hall of Famers Juan Marichal and Bob Gibson. “They both kept you off balance all the time,” he said.

Despite his continued productivity, Robinson was traded to the Baltimore Orioles that winter. Reds’ general manager Bill DeWitt called Robinson “an old thirty.” DeWitt would live to regret those words. Robinson won the Triple Crown and the AL Most Valuable Player Award, and led the Orioles to their first World Championship in 1966.

After solid seasons in 1966 and 1967 (.288 both years), Pinson’s numbers began to decline. In 1968 he had only 5 homers, 48 RBIs, and a .271 average, possibly the result of a series of leg injuries that had begun several years earlier. The Reds ended their long association with Pinson by trading him to the NL champion St. Louis Cardinals on October 11, 1968 in exchange for outfielder Bobby Tolan and pitcher Wayne Granger.

With the retirement of Roger Maris, Pinson joined ex-high school teammate Curt Flood and future Hall of Famer Lou Brock in what appeared to be a dream outfield for the Cardinals in 1969. However, Pinson’s decline continued (10 homers, 70 RBIs, .255 batting average), and after the season he was traded again, this time to the Cleveland Indians of the AL in exchange for outfielder Jose Cardenal.

Pinson spent his final six seasons in the American League with Cleveland (1970-71), California (1972-73) and Kansas City (1974-75). Although his best years were behind him, Pinson averaged .266 with 10 home runs, 48 runs batted in, and 13 stolen bases per season in the AL. His playing career ended in 1976 when the Milwaukee Brewers released him in spring training.

Pinson’s career totals include 2,757 hits, 485 doubles, 127 triples, and 256 home runs, good enough to rank in the top 100 all-time in all four categories 20 years after he left the game. In addition, Pinson’s speed and base running skill enabled him to record 305 stolen bases, thus becoming one of only a handful of players who hit at least 250 home runs while stealing at least 300 bases in their careers.

Following his playing career, Pinson became a coach and hitting instructor for Seattle, the Chicago White Sox, Detroit, and Florida from 1977 until 1994. He retired from baseball after that season and continued to reside in his childhood hometown, Oakland.

An outstanding all-around player over a long and productive career, Pinson was often underrated and overshadowed. For many years after his retirement, his 2,757 hits were the most by any eligible player outside the Hall of Fame, but he never came close to election by baseball writers. His highest vote total was 67 out of more than 400 cast.

Analyst Bill James, in the 2001 edition of his Historical Baseball Abstract, ranked Pinson 18th among centerfielders, ahead of Hall of Famers Hack Wilson, Hugh Duffy, Max Carey and Earle Combs – but behind Jimmy Wynn, Dale Murphy, Wally Berger and Fred Lynn, who are also outside the Hall.

A previous version of this article appeared in SABR’s “Baseball Research Journal #25″ (1999).

1938 was accepted as Pinson’s birth date throughout his baseball career and appears in all the encyclopedias. Several recent publications asserted that he was born two years earlier. California’s official record, at http://vitals.rootsweb.com/ca/death/search.cgi, gives his age as 57 at the time of his death in 1995. SABR member Kerry Keene says he spoke with Pinson in 1991, and Pinson gave his birth date as 1938. His tombstone, at www.findagrave.com, also says 1938. )

Nicholas Acocella and Donald Dewey, The Greatest Team of All Time, 1994, page 165.

The editors of Total Baseball, Baseball: The Biographical Encyclopedia.