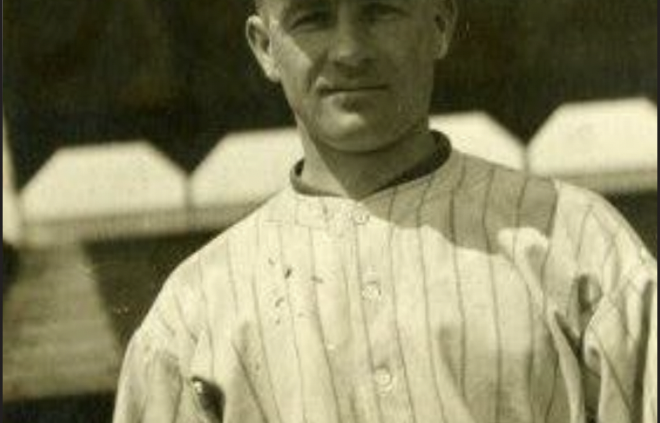 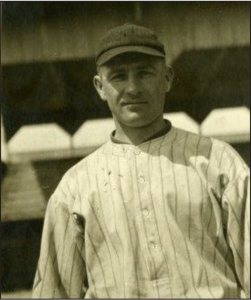 Albert Wickland was born in Chicago on January 27, 1888, the son of Lars and Charlotte Wickland. He had two older brothers — August, a lawyer, and Henry, a bank clerk. At the time of the 1910 Census, Al himself was working as a stationery salesman.

Al played most of his professional career as an outfielder; he batted and threw left-handed. The family name was spelled Wicklund on his birth certificate, in the 1910 census, and on his marriage certificate, and was both spelled and signed as “Wicklund” by him when he registered for the World War I draft. It is possible that at some point he changed the spelling of his surname.

Lars and Charlotte had both emigrated to the United States from Sweden. What work Lars may have done is lost to us due to the loss of the 1890 census data. He appears to have died in Chicago in 1899.

Al Wickland began his professional baseball career in 1911 as a member of the Grand Rapids (Michigan) Furniture Makers/Newark Skeeters of the Class-B Central League, playing in 134 games with a .278 batting average. In 1912 Wickland remained in the Central League, as a member of the Dayton Veterans. He played in 128 games and batted .285, with 138 hits, including 21 doubles, 9 triples, and 2 home runs in 485 at-bats.

One of Wickland’s better games in 1912 came on August 27, when he and his Dayton teammates defeated the Erie Sailors 7-2 in Erie. Wickland doubled with the bases loaded and drove in three runs in the third inning, and drove in another run with a single in the fifth.1

The 5-foot-7, 155-pound outfielder ascended to the major leagues in August 1913. According to the Allentown (Pennsylvania) Leader, “It was announced here tonight that outfielder Al Wickland of the Dayton Central League team, has been sold to the Cincinnati Nationals team. Wickland will join the Cincinnati team in Boston next Monday.”2 He made his debut for the Reds on August 21 and went hitless in five at-bats, playing in the outfield with Bob Bescher and Johnny Bates. He got his first major-league hit in his fourth game, on September 1, when he singled off George McQuillan in the second game of a doubleheader between the Reds and the Pittsburgh Pirates, a game won by Pittsburgh, 5-1. At the end of his first season in the major leagues, Wickland had played in 26 games, getting 17 hits, including 5 doubles and 5 triples, with a .215 batting average.

Shortly after getting his first hit, Wickland had two consecutive games with three hits. On September 5 against the Chicago Cubs, he had a single, double, and triple in a 9-4 Reds victory. The next day, in a 5-3 Cubs victory, Wickland had a double and two singles. Both games were played at Chicago’s West Side Grounds.

After the second three-hit game the Dayton Daily News wrote, “Wickland is demonstrating to big league managers that the little lad can hit the ball just as hard as some of the big fellows. There are few big players who can hit the ball farther than Wickland, and Friday at Chicago, he had a single, double, and triple. … He was responsible for most of the Chicago runs by trying to make the third out with a shoestring catch that used to bring Dayton fans to their feet. … He will grab a good many more of these than he will miss before the season is over.”3

Wickland spent the next two seasons with the Federal League’s Chicago Chi-Feds/Whales (1914-15) and Pittsburgh Rebels (1915). Chicago manager Joe Tinker signed Wickland,4 who leapt at Tinker’s offer after a long session with the manager. His salary was not given out, but the Cincinnati Enquirer reported that he had signed a three-year contract. That Wickland jumped his contract was not unexpected; he had refused to sign a contract with the Reds.5

As the 1914 season opened, Wickland’s playing ability impressed the Wilkes Barre (Pennsylvania) Times Leader, which wrote that Wickland “is clouting the ball on the nose in great style and Tinker is greatly pleased with the showing of the former Central Leaguer.”6

In his Federal League debut, on April 16, Wickland had two both doubles off Gene Packard of the Kansas City Packers in a 3-2 Chicago victory. His first major-league home run came on May 6 against the Buffalo Blues at Chicago’s Weeghman Park.7 It was a solo shot off Harry Moran of Buffalo and helped propel Chicago to a 12-4 victory. Wickland’s best game in 1914 came on September 15 in a 6-0 win by the Chi-Feds over the Pittsburgh Rebels. Wickland had his sixth home run of the season and three singles off the Rebels’ Cy Barger.

Another of Wickland’s 1914 highlights was a 16-game hitting streak between April 22 and May 15. In that stretch Wickland had 23 hits, including four doubles, one triple, and one home run, and six runs batted in. When his hit streak began he was hitting .250 and when it ended his batting average was .389.

Wickland was patient at the plate and adept at drawing walks. In 1914 he walked a league-leading 81 times, for a .375 on-base percentage. He was tied for10th place in the league in on-base percentage with Vern Duncan of the Baltimore Terrapins.

In early June of 1915, Wickland was sold to the Pittsburgh Rebels. Between April 10 and June 5 with Chicago, his best game came on May 9 in a 4-3 loss to the Newark Peppers. Wickland batted leadoff in the game and went 4-for-4, with a home run, double, and two singles. He had one RBI and scored two runs. On June 3 at Weeghman Park, Wickland “was generously cheered by the 5,000 or so in attendance” as he went 3-for-4 at the plate.8

Once in a Pittsburgh uniform, Wickland had four singles and scored three runs on June 23 in the Rebels’ 11-1 victory over the Newark Peppers.

Six days later, on June 29, in a 7-1 victory over Baltimore, Wickland reached base five times on two singles, a double, a walk, and an error. He scored twice and made a great catch on a long fly in left field as Pittsburgh came away with the victory.

In a 5-4 win by the Rebels over his former Chicago team on October 3, Wickland went 4-for-6 with three RBIs, the third time in 1915 he had four hits in a game.

After the demise of the Federal League, Wickland spent the 1916 and 1917 seasons with the Indianapolis Indians of the American Association, batting .259 in each season.

Wickland made it back to the major leagues in 1918, after being selected by the Boston Braves in the Rule 5 major-league draft in September 1917. Playing for the Braves in 95 games (91 of them in right field), he batted.262 with 4 home runs with 32 RBIs. Four times during the season Wickland had three hits in a game. The first time was on April 17 in the second game of the season, when the Braves were 14-2 winners over the Philadelphia Phillies in a game at the Baker Bowl in Philadelphia. Wickland had three singles in the rout. On May 8 in a 4-3 Boston victory over the Brooklyn Robins, Wickland had a home run, triple, and single with three RBIs off the Robins’ Jack Coombs. On May 22 he had three singles in a 3-2 Braves win over Cincinnati at Redland Field in Cincinnati. And on July 19 he had three singles in a 6-4 loss to the Reds at Redland Field.

Wickland’s final season in the major leagues was 1919. The Braves had sold his contract to St. Paul of the American Association on May 27. On June 10, St. Paul traded him to the New York Yankees in exchange for players to be named later.

Wickland played in 26 games for the Yankees, hitting for a .152 average. On July 26 in an 8-5 Yankees win over the Red Sox at Fenway Park, Wickland singled off Sad Sam Jones for his final major-league hit. In his final appearance in a major-league uniform, Wickland pinch-hit unsuccessfully for Bob Shawkey in a 7-0 loss to the Detroit Tigers.

Wickland’s last three seasons in professional baseball were spent with the Toledo Mud Hens of the American Association. In 1920 he batted .334 in 120 games, his best batting average in Organized Baseball. In 1921 in 156 games for Toledo he hit .287 and in 1922, his final professional season, he played in 93 games and hit for a .313 average. In eight minor-league seasons he batted .288.

In 1909 Wickland had married Lillian Gilbertson on October 27 in Chicago. Her mother was from Sweden and her father from Norway.

The 1930 United States Census shows Wickland working as an attendant at a Standard Oil gas station in Chicago. He and Lillian had a son, Eugene, who was 4 years old in 1930 and died on July 26, 1933. A brother, Harry, an electrician, was 47 at the time of the census and was living with the Wicklands.

Al Wickland was 53 years old at the time of the 1940 Census, and both he and Lillian were living in Chicago and operating the Jaeger Funeral Home. Also living in the Wickland household were a 20-year-old son, Albert, an office clerk, and an 8-year-old son, Kenneth.

Wickland died on March 14, 1980 in Port Washington, Wisconsin. He was 92 years old. He was cremated.

In addition to the sources cited in the Notes, the author consulted the Baseball-Reference.com and retrosheet.org websites as well as Ancestry.com. The author would also like to thank Bill Nowlin for his invaluable assistance in completing this. Also a big thank-you to Darcie Kileen and Tom Carson of Monarch Libraries in Port Washington for their assistance.

7 Some databases use the name Buffeds.