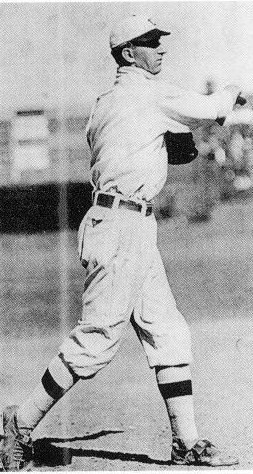 From 1901 to 1904 Bill Bradley was arguably the best young player in the American League. Wielding a heavy bat he nicknamed Big Bennie, the 6-foot, 185-pound right-hander was one of the junior circuit’s most feared hitters, becoming the first player to homer in four straight games in 1902, and batting .300 or better three consecutive years. A natural power hitter who was out of place in the run-deprived Deadball Era, Bradley was not a fan of the “inside” strategies championed by many of the game’s leading figures. “Brilliant coaching makes me tired,” he once bluntly declared. “This idea…that coachers, teamwork, and the so-called inside ball … makes or unmakes a team, is foolishness.” Yet Bradley was no simple-minded basher; he was admired throughout the league for his aggressive base running and brilliant fielding at third base, where he led the league in double plays three times and fielding percentage four times. And when a series of injuries sapped his power, Bradley transformed his game, adopting inside tactics to help his team win. In 1908 the man who had ranked second in the league in home runs just six years earlier laid down 60 sacrifices, the second most in baseball history.

William Joseph Bradley was born on February 13, 1878, in Cleveland, where he grew up playing pick-up ball in the Payne Avenue district with the Delahanty brothers and Tommy Leach. The young Irishman got a parochial education at Immaculate Conception School for eight years. Upon leaving school, Bradley found a job with the Dangler Stove Company and earned extra money playing semi-pro baseball with the Galion, Ohio club.

Hearing of an opening in the Western Association, Bill headed out to Burlington, Iowa, in September 1897, where he played third base for only 18 games before the team hit financial troubles. The day before his release Bradley made his mark, winning a game with a ninth-inning grand slam. After his release he rode the rails on a freight train back to Akron and then walked the 35 miles to Cleveland, flat broke.

With the help of Leach, Bill caught on with the Auburn Maroons of the New York State League in July 1898, playing shortstop and first base. He played third the following year and posted a .312 batting average, stealing 25 bases in 88 games. On July 31, 1899 the Auburn club was transferred to Troy, and renamed the Troy Washerwomen, and ten days later Bradley was sold to the Chicago Orphans. According to one story, upon hearing the news that he was headed for the big leagues, Bradley gave the New York State League something to remember him by, smashing a home run onto a racetrack where it proceeded to roll a quarter of a mile.

Bradley played in Chicago for $150 a month, sitting on the bench for two weeks before making his debut at shortstop on August 26, 1899. After eight errors in five games, the Cubs shifted him to third base, where he would remain for the rest of his career. Bradley batted .310 in 1899, and in 1900 his salary rose to $300 per month. After another solid season, in which he batted .282 with eight triples, Bradley sought another raise. To his dismay, Cubs management rejected the offer and even told him he might not make the team in 1901.

After talking with teammate Clark Griffith, Bradley jumped to the American League’s Cleveland franchise, which offered him a $3,500 salary (later to rise to $4,500). Bradley performed well in 1901, leading the team in slugging and scoring 95 runs. In 1902 Bradley came into his own as one of the league’s top stars, homering in four straight games from May 21 to May 24, and also assembling a 29-game hitting streak. Bradley finished the season with career highs in batting average (.340) and slugging percentage (.515).

Still only 24 years old, Bradley gave every indication that he was a superstar in the making. Sensing the youngster’s greatness, New York Giants manager John McGraw tried to lure him back to the National League with a three-year, $10,000 contract, plus a $5,000 signing bonus. But Bill was still tired of the National League and, happy to be playing near home, he rejected the offer. For Bradley, going to New York “was the most foolish move I could have made.”

Over the next two seasons Bradley continued to make headlines with his bat. On July 28, 1903, Bradley connected for three triples, establishing an American League record that has since been tied many times. Two months later, Bradley capped off his stellar 1903 campaign by hitting for the cycle, with an extra double thrown in. He batted .313 for the year, and his .496 slugging percentage ranked second in the league. He followed that performance with another solid campaign in 1904, batting an even .300 and driving in a career-best 83 runs.

When not slamming the ball with authority, Bradley fielded with genius. He was a fearless base blocker, grinning and awaiting the incoming runner from second, and mastered fielding the bunt with a one-motion barehanded scoop and toss. His long reach, ability to judge balls, and excellent arm were also noted. Throughout his career, Bradley led the league in many fielding categories at his position and twice made seven putouts in a nine-inning game—a record that has since been tied.

Bradley was not only a dazzling fielder with clout, but also a clever and emotional player with peculiar habits of his own. Like former Cleveland shortstop Pebbly Jack Glasscock, Bradley had a mania for picking small stones out of the dust and tossing them away. He could be found whipping his head back a few times to read catcher’s signals and was adept at feigning being hit by a pitch, ranking among the league leaders in that category four times. Bradley was also an aggressive baserunner “who had to be carefully watched as he had the habit of stretching singles into doubles upon the slightest provocation,” according to the Cleveland Plain Dealer.

In short, Bradley was the complete package—a powerful hitter and excellent base runner who was among the league’s best fielders at a position where good offense remained a rare commodity. Still only 26 years old following the 1904 season, Bradley appeared to have a long and prosperous future ahead of him, a fact his contemporaries were quick to acknowledge. In 1904, when a fan asked Boston’s standout third baseman, Jimmy Collins, who was the game’s best third sacker, Collins simply replied, “Well, if I could field and bat like Bradley, I should lay claim to that title myself.”

But things began to unravel for Bradley during the 1905 season, when he was diagnosed with “autotoxicity,” a stomach ailment. Weakened by the illness, Bradley’s batting average plummeted to .268, and for the first time in his career he failed to hit a single home run. Things went from bad to worse the following year, when he missed half the season after his right wrist was broken by a pitch from New York hurler Bill Hogg, who according to one account then spat, “The big Frenchman [Nap Lajoie] is next on my list.” Bradley returned the following year, but was struck with fever in July and finished the year with an abysmal .223 batting average. In May 1908, the ill-starred third baseman tore a ligament in his side. Though he remained in the lineup despite the injury, Bradley finished the year with a .243 batting average.

Even his personal life had taken a turn toward the macabre. In November, 1905, a 36-year-old book agent, Christian Schlather, entered the Bradley home, fondled Bradley’s 14-year-old sister, Alice, and threatened to kill her if she would not elope with him. When she met the man later, Bill jumped out and thoroughly thrashed Schlather, who was later convicted of intoxication, carrying concealed weapons, and assault and battery. The would-be kidnapper and rapist was almost lynched by a hostile crowd of Bradley supporters before police arrived.

With his reduced effectiveness at the plate, Bradley found other ways to contribute. In 1907 he set an American League record with 46 sacrifices, which he broke the following year when he amassed 60 sacrifices, still the second highest total in history. Even as Bradley’s batting average plummeted still further in 1909 and 1910 (both years he failed to reach .200), Bradley was still celebrated for his fielding. When Cleveland finally released him in August, 1910, the Cleveland Plain Dealer declared “there is not a third baseman in either big league today who is as accurate a thrower as Bradley with his famous underhand whip.”

Bradley landed on his feet, joining Toronto’s Eastern League team, and turning in three strong seasons as a playing manager. He batted .294 with 13 triples and 8 home runs in 1911, and in 1912 his Maple Leafs team won the inaugural International League pennant as he posted a .292 average with 17 triples. In 1914 Bill was summoned back to a slightly larger stage when the Federal League made a bid to become a third major league. Signed to a three-year contract for $7,000 per season, he managed the Brooklyn Tip Tops to a .500 record and fifth-place finish, only playing in a pinch-hitting role.

Bradley was not invited back for the next season, and he sued the league for breach of contract in New York State Supreme Court. Meanwhile, he played the 1915 season for former teammate George Stovall‘s Kansas City Packers, also of the Federal League. He could still field third base pretty well, but his hitting had gone even further south, as he finished the year with a .187 batting average in 203 at-bats.

After a brief tenure managing Erie of the Inter-State League in 1916, Bill did not return to organized baseball until 1928, when he rejoined the Indians as a scout. He remained in that capacity through the 1945 season, went to Detroit for 1946, and returned to Cleveland in 1947. Bradley was a notable scout, responsible for recommending such talent as Denny Galehouse, Tommy Henrich, Ken Keltner, Frankie Pytlak, and Gene Woodling. In 1950 Bradley suffered a heart attack, ending his days of traveling to scout players, though he continued to look over young talent brought up by the team until 1953. Bill Bradley died at Cleveland’s Ingleside Hospital on March 11, 1954, following a three-week bout with pneumonia. He was survived by his wife of 50 years, Anna, and two children. Buried in Cleveland’s Calvary Cemetery, Bradley was posthumously elected to the Cleveland Indians Hall of Fame.