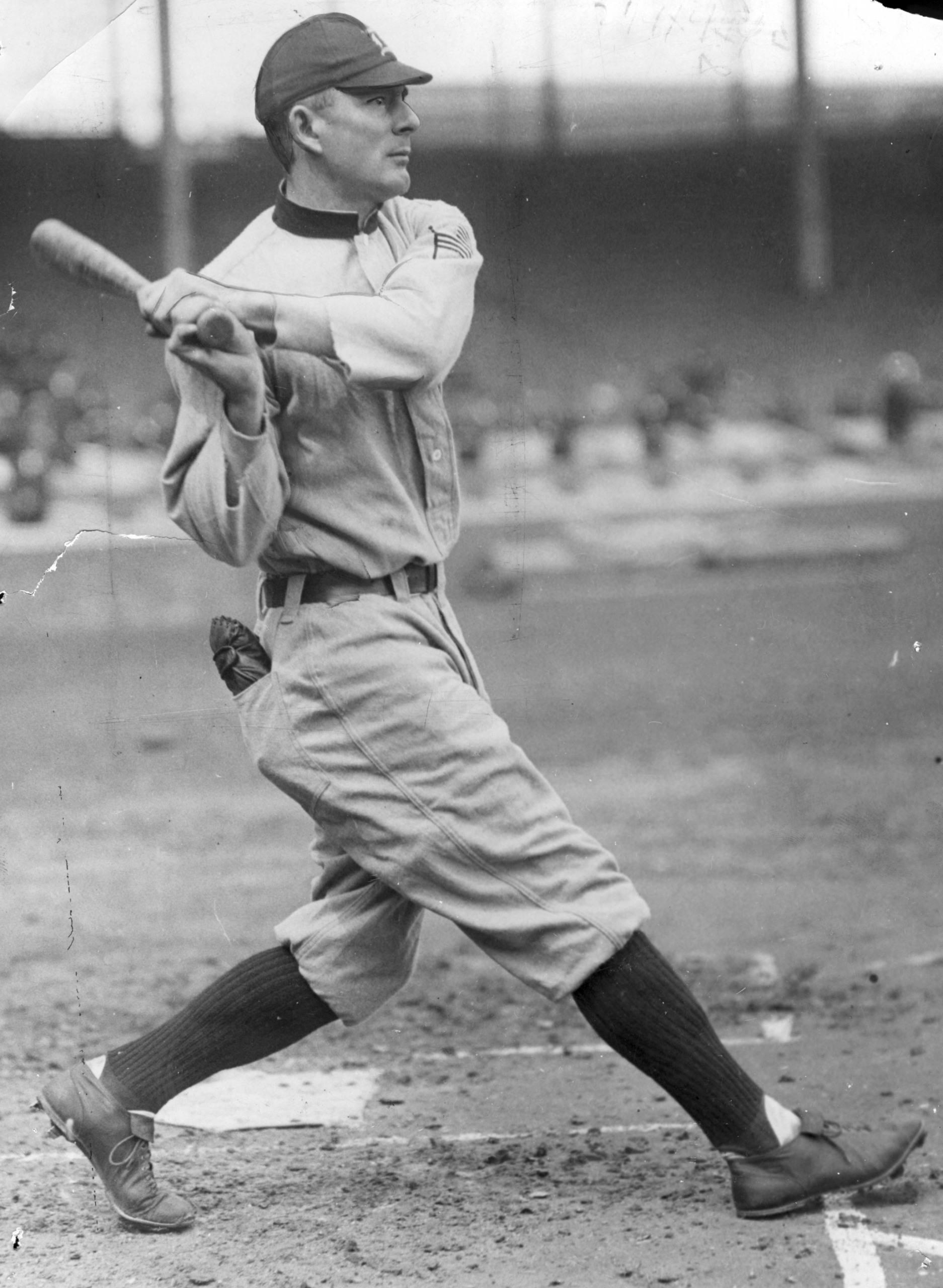 As the clean-up hitter on one of the strongest offensive teams of his day, Bobby Veach was one of the truly great RBI men of the late Deadball Era, easily leading the major leagues in runs driven in over the twelve years, 1913 to 1924, that he was a full time player. Veach drove in over 100 runs in a season six times, hit 30 or more doubles eight times and smacked ten or more triples ten years in a row. In all, Veach played for 14 major league seasons and hit .300 or better ten times, finishing with a lifetime .310 batting average.

Veach was known to be easygoing, steady and unassuming, characteristics that put him in stark contrast to, and at times at odds with, the volatile Ty Cobb who played next to him. At five feet 11 inches and a slim 165 pounds, Veach was small for a power hitter, but as baseball writer Fred Lieb noted, he “packed a terrific punch for his size.” As a right handed fielder who batted from left side, Veach was a full and free swinger. He rarely altered his picturesque swing to adjust to pitchers, slumps or game situations. For this reason, he was remarkably consistent offensively, although he sometimes struggled to execute situational hitting staples like the hit and run. Although regarded as awkward in the field and on the basepaths while in the minor leagues, Veach was always blessed with a strong and accurate arm and good natural speed as a runner. In time, he worked hard to make himself an accomplished fielder, recording over 300 putouts six times and over ten assists 11 times, as well as a frequent base stealer, swiping 195 bases in his career.

Robert Hayes Veach was born in Island, Kentucky on June 29, 1888 as one of three sons of Mark and Sarah Veach. Like many ballplayers of his day, Veach was of Irish decent and the male members of his family were coal miners. His father moved the family to Madisonville, Kentucky when Veach was twelve years old, and he played his first organized baseball game at the relatively advanced age of thirteen. The following year, Veach quit high school to join his father, and eventually his brothers, working in the mines. Even while in the minor leagues, Veach continued to work there during the winters. While working almost all of his teenage years in the mines strengthened Veach, it may also have left him little time to develop other baseball skills. When he was 17 years old, Veach moved to Herrin, Illinois and began his professional career playing semi-pro baseball in the old Eastern Illinois Trolley League. He made very little money, but showed enough promise to be eventually signed five years later as a pitcher by the Peoria Distillers of the Three I League.

After a few games in the 1910 season, Peoria farmed Veach out to the Kankakee, Illinois team in the Northern Association, where he reportedly posted a 10-5 record as a pitcher. The next year Veach was back with Peoria, who moved him to the outfield to take advantage of the power he showed as a hitter. The move was successful as Veach finished the year hitting .297. During this time, Peoria employed Charlie Barrett, a former scout for the St. Louis Browns, as a fundamentals coach. Barrett helped to polish Veach’s fielding and baserunning skills. In 1912, Veach’s batting average improved to .325 before he was sold to Indianapolis of the American Association. There, he hit .285 during a brief two month stay before the Detroit Tigers purchased the 24-year-old and added him to their late season roster.

When Veach arrived in Detroit in late 1912, the Tigers had been platooning left fielders for a number of years trying to find a player who could both hit and field. The aging Davy Jones made the majority of starts in 1912, but, hitting leadoff, he had driven in only 24 runs in 99 games that year. So when Veach hit .342 and drove in 15 runs in just 23 games at the end of 1912, manager Hughie Jennings knew he had found the third piece of his outfield. In later years, Veach remarked how kind Jennings had been to him and how patient he was in developing his skills as a ballplayer. Over the next two years, Veach established himself as an everyday player, hitting over .270 and driving in an average of 68 runs a year. Baserunners also learned about his powerful arm as he started a string of nine consecutive seasons with 14 or more outfield assists.

Despite his small size, Veach swung the bat like a powerful slugger, down at the end of the handle, and with similar results. “Years ago I choked up on the bat,” Veach later explained to F.C. Lane. “Choking up has the effect of shortening the bat and it seemed reasonable to suppose that the shorter the bat the more quickly you could swing to meet the ball. In theory this was sound, but in practice I found it wouldn’t work. Most of the really good hitters swing from the handle of the bat.” A free swinger with a long, beautiful stroke, Veach put his shoulders, and not just his wrists and arms, into each of his swings. Despite this aggressive approach, Veach walked more often than he struck out, and never ranked among the league leaders in the latter category.

By 1915, Veach was just entering his prime and his offensive performance placed him near the top of the league. He hit .313 that year and tied Sam Crawford for the league lead in RBI with 112. He also led the league in doubles with 40, was second in extra base hits, and third—on both his team and the AL—in hits and total bases. 1915 also marked the last full productive year of Crawford’s career and it was clear that Veach was poised to take over as the man counted on to drive in key runs for the Tigers. The team was an offensive juggernaut and roared to a 100 win season, which left them only 2 1/2 games short of the pennant. From 1916 to the war-shortened 1918 season, Veach continued his assault on AL pitchers, hitting over .300 in 1916 and 1917, leading the league in RBI in 1917 and 1918, and finishing among the league leaders in hits, doubles and triples each year.

In 1919, the Tigers rebounded with a winning season and Veach had one of the best years of his career. He posted a .355 batting average, second only to Cobb in all of baseball and the highest total of his career. In addition, he led the league in hits (191, tied with Cobb), doubles (45) and triples (17). As the Deadball Era ended, Veach’s hitting style seemed tailor-made for the free swinging offensive era that followed it. Yet 1920 saw the 32-year-old Veach’s offensive production dip slightly, as he batted .307 and drove in 113 runs. On September 17 against the Red Sox, he had one of the best games of his career, collecting six hits and hitting for the cycle. However, when Jennings stepped down as the Tiger manager at the end of the season and Cobb was named to replace him, life as a Tiger would never be the same for Veach.

Veach was just not Cobb’s type of player. It had bothered Cobb for years that Veach did not seem to take baseball very seriously and was known to joke with opposing players, even pitchers, which Cobb could not tolerate. Determined to wipe the ever-present smile off of Veach’s face, Cobb instructed Harry Heilmann to yell insults at him throughout the 1921 season to make him angry. The ploy may have worked, because Veach’s offensive numbers improved in almost every category in 1921. In fact, the Tigers’ starting outfield had a season for the ages, banging out 641 hits for a combined .372 batting average and driving in 368 runs. Veach also led the league in outfield putouts with 384, showing how far he had come as a fielder. The team’s pitching, however, was once again too weak to contend for a pennant and the Tigers finished with a losing record. At the end of the season, Cobb broke his promise to Heilmann and refused to admit that he was behind the year-long hazing. When Heilmann tried to explain, Veach did not believe him and carried a grudge for many years.

In the winter and spring leading up to the 1922 season, Cobb tried to trade Veach to the Yankees for shortstop Everett Scott, but the Yankees would not budge despite the early suspensions of sluggers Babe Ruth and Bob Meusel. Veach responded to his manager’s lack of confidence in him by almost mirroring his excellent 1921 season, collecting 202 hits, driving in 126 runs and recording 375 putouts. Despite his continued excellence at the plate and in the field, and perhaps as a consequence of his salary holdout before the 1923 season, Cobb continued to try to replace his 34-year-old left fielder. Veach hit .321 in 1923, but had only half his normal 600 at-bats, due partly to injuries and partly to increased playing time for talented newcomer Heinie Manush. In January of 1924, Cobb sold Veach to the last place Red Sox for an undisclosed amount of cash.

Veach was not happy about how his Tiger career had ended, nor the prospect of going to the most offensively anemic team in the league. After an initial holdout, he joined his Red Sox teammates before spring training and ended up having a decent season, driving in 99 runs and hitting .295. At his first game back in Detroit on May 18, the local fans thanked Veach for his years as a Tiger by presenting him with a diamond ring. Veach returned the favor that same year arranging a try-out with Detroit for future Hall of Fame second baseman Charlie Gehringer, whom he had spotted in a sandlot game. The 1924 season, however, marked Veach’s last as a major league starter. In May 1925, after only five at-bats, he was traded to the Yankees, who later sold him to the Senators in August for the waiver price. Used almost exclusively as a bench player, he had the distinction in 1925 of both pinch-hitting for Babe Ruth in one game and breaking up Ted Lyons‘s bid for a no-hitter with two outs in the ninth in another. Finally, by ending the year with the Senators, he was able to play in his first and only World Series. Characteristically, although he had only two plate appearances, he drove in a run.

From 1926 to 1929, Veach played for the Toledo Mud Hens of the American Association. In his first three years with Toledo, he averaged 157 games a season, hit over .360 each year and won the batting crown in 1928 with a .382 average at age 40. Moving to the Jersey City Skeeters in the International League in 1930, he played in only 75 games. After the season, he retired from baseball for good and settled down in the Detroit area with his wife of over twenty years, Ethel Clare Schiller Veach, and their sons. Returning to the other profession he knew well, he purchased an interest in a coal company in 1933 and was the sole owner two years later. In 1943, he was hospitalized and had a serious abdominal operation. He never was completely healthy again and died at home two years later on August 7, 1945 from what may have been lung cancer. Survived by his wife and sons, he was entombed in the White Chapel Memorial Cemetery in Southfield, Michigan.

Brent Kelley. The Case For: Those Overlooked by the Baseball Hall of Fame, McFarland.