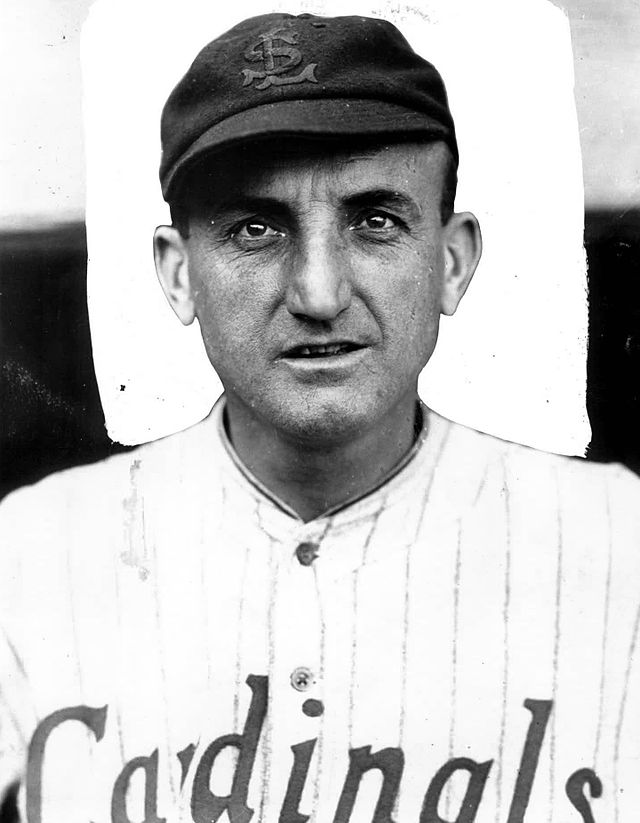 Perhaps the greatest defensive shortstop of his generation, Bobby Wallace was a fair right-handed hitter whose spectacular glove work catapulted him to the Hall of Fame. Wallace began his major league career as a pitcher, where his dazzling fielding soon convinced management to find a position that better suited his unique combination of skills. After spending two seasons at third base, Wallace moved to shortstop in 1899, where his strong arm, spectacular range, and fluid motion revolutionized the way the position was played. His defensive play was so outstanding that in 1911, a year in which Wallace batted only .232, Pittsburgh Pirates owner Barney Dreyfuss declared, “The best player in the American League, the only man I would get if I could, plays on a tail-end team, and few people pay any attention to him. I mean Bobby Wallace of St. Louis. I wish I had him.” On June 10, 1902, Wallace accepted 17 chances in a game against Boston, a mark which has stood as the American League record for more than 100 years.

Rhoderick John Wallace was born in Pittsburgh on November 4, 1873, but spent most of his youth in nearby Millvale. Rhoderick’s mother, Mary, was a native-born Pennsylvanian of German extraction, and his father, John, was a Scottish immigrant who supported his family as a grocery clerk. The first serious money Bobby earned from playing baseball came in 1893, when the 19-year-old was paid the princely sum of $25 to pitch for the Clarion Eagles in an independent league in Pennsylvania. “I had to pinch myself on the train to make sure I was awake and was really going to get 25 smackers, which was big dough in those days, for doing something I’d have been willing to pay $25 for doing if, at the time, I had been loaded,” recalled Bobby.

He pitched well enough against a squad from Franklin, PA that the Franklin team hired him the following season for $45 a month. By the summer of 1894, however, the Franklin team and the independent league in which it played went under. Bobby asked Connie Mack (then manager of the Pittsburgh Pirates) for a big league tryout but Mack told the 5’8″, 170-pound right-hander that he was too little for a big league pitcher. But even after Bobby had become a big league star, he didn’t hold a grudge against Mack, stating that, “For years I never met Connie on or off the field without saying ‘Too little?’ It was a standing joke between us and later I noticed that Connie found you could get good pitching in other than the big economy size package.”

Soon after he was turned away by Pittsburgh, Bobby signed a contract with the Cleveland Spiders. Cleveland’s manager, Patsy Tebeau, had learned about Wallace from Bobby’s old catcher with the Clarion Eagles. Bobby’s pitching debut on September 15, 1894 was anything but Hall of Fame material, as he surrendered 13 hits and 7 runs to Boston in a rain-shortened 6-inning game. He appeared in just 4 games that season, but showed the Spiders enough that he was given 28 starts and 2 relief appearances in 1895 en route to a 12-14 record. In 1896, Bobby made 16 starts and 6 relief appearances in while compiling a record of 10-7 with an outstanding 3.34 ERA.

As a pitcher, Bobby exhibited above-average fielding skills to the extent that, after a short-lived experiment as an outfielder in 1896, manager Tebeau switched him to third base in 1897. Bobby logged over 300 games at the hot corner until June 5, 1899, when he finally moved to the position that earned him the nickname “Mr. Shortstop.” By then, thanks to syndicate ownership, Wallace and Tebeau had been transferred from the hapless Spiders to the St. Louis Perfectos, the first of three seasons Bobby would spend with the franchise. “We were in Philadelphia when Manager Pat shifted me from third to short and right off the bat I knew I had found my dish,” said Wallace. “Footwork was more a part of the new position than it had been at third. I suddenly felt I had sprouted wings. A world of new possibilities opened for me.”

Even in the Deadball Era, however, baseball was a business as well as a game, and the National League’s salary cap of $2,400 limited what Senior Circuit teams could pay star players like Bobby. The new American League, however, had no such constraints and gave Bobby the chance to earn substantially more. He seized that opportunity by jumping to the cross-town St. Louis Browns of the Junior Circuit in 1902. His contract totaled $32,500 over five years, with $6,500 paid at signing, making Wallace for a time the highest paid player in baseball. Remarkably for contracts of that era, it also contained a clause providing that Wallace could not be traded without his consent. In another unusual move, the Browns also took out a life insurance policy on Wallace in case he met an untimely death before the contract’s expiration.

During his prime years with the Browns, Bobby was a fearsome hitter; though his batting average never surpassed .285 during his 15-year stay with the club, Wallace at various times ranked among AL leaders in hits, walks, total bases, doubles, triples, and slugging percentage. He was also almost annually among the RBI leaders, ranking in the top ten during eight out of 12 seasons from 1897-1908.

It was on defense, though, that Bobby really earned his salary. He led the AL in assists twice and fielding percentage three times. Wallace’s defensive prowess resulted not only from his physical skills but also from his mental approach to playing shortstop. “As more speed afoot was constantly demanded for big league ball, I noticed the many infield bounders which the runner beat to first only by the thinnest fractions of a second,” noted Bobby. “I also noted that the old-time three-phase movement, fielding a ball, coming erect for a toss and throwing to first wouldn’t do on certain hits with fast men…it was plain that the stop and toss had to be combined into a continuous movement.”

The toughest play for Wallace was the ball hit directly at him. He explained that “when you were going either way, you could gauge the length, height and speed of the hit as you moved over to get it. But you had to play the ones straight at you by ear.”

When Jack O’Connor was fired as Browns manager following his role in the 1910 batting race scandal, Wallace was named as his replacement. The quiet, colorless Wallace was not cut out for managing a big league ball club, and he knew it. “I never had the slightest desire to be a major league manager and all knew it,” said Wallace. “But Ban Johnson, Bob Hedges, and Jimmy McAleer persuaded me that the Browns were in a sort of a jam and it was up to me, as an old standby, to do what I could. Part of my reluctance to act as boss was based on my knowledge that a once fighting team had gone steadily downhill through lack of business office know-how.”

Bobby continued as a player with the Browns until May 17, 1915, when, after two consecutive sub-par seasons at the plate, he decided to give umpiring a go. “If I disliked managing, I liked umpiring even less,” said Wallace. Consequently, the 42-year-old Wallace returned to the Browns in 1916, but only for 22 games as a coach and substitute player. After a brief stint with Wichita in the Western League, he closed out his career in 1917 and 1918 back in the National League as a part-time player with his old team, the St. Louis Cardinals. He got his final big league hit on September 1, 1918, against Jimmy Ring of the Reds.

Away from the diamond, Bobby enjoyed fishing, billiards and golf. But baseball remained his life and career. He managed in the minor leagues, coached for the Reds (managing them for 25 games in September of 1937), and scouted for Cincinnati for the final 33 years of his life. Wallace’s stellar career was capped off with his election to the Baseball Hall of Fame in 1953 by the Veterans Committee, along with pitcher Chief Bender, managers Harry Wright and Ed Barrow and umpires Bill Klem and Tommy Connolly.

Wallace had no children, but had no doubts that he would have wanted a son to play baseball. Reasoned Bobby, “Where else could he lead a cleaner and healthier life in sunshine and fresh air? Or bring so much pleasure to so many people? And be paid for it too?”

Bobby Wallace died in a nursing home in Torrance, California on November 3, 1960, the day before his 87th birthday. He was buried in Inglewood Park Cemetery, in Inglewood, California.

In preparing this biography, the author relied primarily on Bobby Wallace’s file at the National Baseball Hall of Fame Library in Cooperstown, New York.