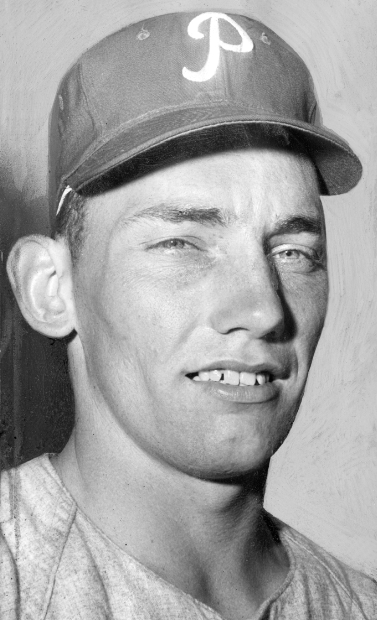 He was a lanky, crew-cut 21-year-old newcomer called up from the Triple-A Buffalo Bisons for a brief four-game trial with the 1960 Philadelphia Phillies. For the ensuing 50-plus years Bobby Wine played important full-time major-league roles. He was a classic shortstop with a great glove who struggled at the plate. After his playing career ended, he was a valuable organization man both in and out of uniform. He served as a coach, instructor, interim major-league manager, and advance scout.

Born September 17, 1938, to Edith Wine and Fred Wine, a construction worker in New York City, Robert Paul Wine grew up in nearby Long Island with brothers Freddie, Eddie, and Jimmy and sister Carol. The 6-foot-1, 187-pound Wine was a keenly-scouted high-school baseball player. At one point a scout had arranged an interview for Bobby, a staunch Yankees fan, with Yankees general manager Lee MacPhail. The scheduled meeting never materialized and shortly afterward, in the summer of 1957, scout Dale Jones – who had closely followed the scholastic careers of Bobby and his older brother Eddie in Northport, Long Island – arranged for Bobby’s signing with the Philadelphia Phillies.

Eighteen-year-old New Yorker Bobby rode a railway sleeping car to Johnson City, Tennessee, home of the Phillies’ Class D minor-league club in the short-season Appalachian League. In 54 games he batted .337 and slugged .540 primarily as a middle infielder. He would never match those figures again, but in six minor-league seasons he averaged .265 with a .382 slugging average. Wine advanced quickly through the Phillies’ organization: 1958 at Class C Bakersfield, 1959 with Williamsport (Class A), then 1960 to Triple-A Buffalo. At Buffalo he registered 500 assists and 104 double plays in 154 games. That earned him four September starts at shortstop with the Phillies, but his .143 BA was even more anemic that the .231 of regular shortstop Ruben Amaro. Wine returned to Buffalo for 1961 and the start of the 1962 season. In his time in Class A and Triple A ball, Wine had a sparkling .952 fielding percentage. His gaudy assist totals were regularly among the league’s best. By mid-May of 1962 Wine was in Philadelphia sharing the shortstop position with Amaro and sometimes playing third base. When the opposition started a left-hander, third baseman Don Demeter was moved to center field replacing Tony Gonzalez. Wine had played his last minor-league game but his position in Philadelphia was often challenged.

“Wino,” as he was called by teammates, almost always batted eighth. In 1963 he changed to uniform number 7, which he wore for nine seasons with the Phillies and Expos. While incumbent Amaro did get 42 starts at shortstop in 1963, Wine started all of the rest of the games and won his only Gold Glove.

The Phillies’ 1964 season – that “almost World Series” – stands out in Bobby’s memories. He started a bare majority of the games at shortstop; Amaro started 69 times and Cookie Rojas 10. Oddly, Amaro succeeded Wine as NL Gold Glove shortstop – Amaro in ’64 and Roy McMillan in ’59 are the only middle infielders to win the Gold Glove in a full-length season to not play at least half the games at the position. Manager Gene Mauch often had both Amaro and Wine on the field at the end of games in 1964. Wine finished 16 games at third base. Amaro finished 51 games at first base and three each at second base and third base.

Phillies general manager John Quinn plugged the hole at first base for 1965 by trading for Dick Stuart. Since Stuart had always worn number 7 in his career, Wine switched to 13 and appeared in 135 games at shortstop to Amaro’s 60. To no one’s surprise with Stuart starting at first base, Amaro finished 59 games there and Wine even had four appearances at first base.

The offseason of 1965-66 was a combination of good news and bad news. On the bright side Wine’s teammate and rival Amaro was traded, as was Stuart so Wine reclaimed his number 7. Unfortunately for Wine, the Phillies acquired All-Star shortstop Dick Groat. Wine missed a lot of 1966 with back problems.

Possibly showing his age, Groat was hitting just .136 in April 1967 when Wine replaced him in the starting lineup. Groat was sold to the San Francisco Giants in June. Wine led National League shortstops in fielding at .980 that season but had the worst batting average among regular NL shortstops at .190. One oddity of Wine’s season occurred on May 5 against the Los Angeles Dodgers. Despite Mauch’s recent platoon of Tito Francona and Tony Taylor at first base, on that day Wine, with a gaudy .075 batting average (in 14 games), started at first base against lefty Jim Brewer.

A recurrence of Wine’s back issues ended his 1968 season in mid-May with a .169 batting average. Teammate Larry Jackson was taken in the postseason expansion draft but retired rather than report to Montreal. On April 7, 1969, the Expos, managed by Mauch, took Wine in the replacement expansion draft. Despite spending two years in the minor leagues and a year in Montreal, and missing time due to back injuries, Wine was the Phillies’ shortstop of the 1960s. While he outlasted his competition, his shaky hold on the position is obvious from his presence in the Opening Day lineup once (in 1964) in that decade.

Wine began his Expos career backing up shortstop Maury Wills, but when Wills was traded back to the Dodgers in June, Wine became the starter. For the first time in three years he reached the Mendoza line, hitting .200 on the nose. In October Mauch gave Wine his second and last start at first base, resting Ron Fairly against lefty Luke Walker. Wine batted only .232 in 1970 but it was one of his best years. He had his career highs in games, at-bats, runs, hits, doubles, RBIs, and walks. He broke Roy McMillan’s single-season double-play record for shortstops with 137 (still the National League record as of 2013). In 1971 Wine’s batting slipped back to .200, but still he helped the Expos escape the cellar for the first time. In early April 1972 Montreal traded star Rusty Staub to the New York Mets for three youngsters including 21-year-old shortstop Tim Foli. Wine became a utility infielder whom Mauch used mostly as a defensive replacement at third base for Bob Bailey. He played his last game on July 8, 1972.

When coach Eddie Haas was elevated to manager of the Atlanta Braves in 1985, Wine was made a coach. Haas didn’t last a whole season and Wine as interim manager ran the club for the last 41 games. Wine recalled, “At the time Ted Turner elevated me to manage the Braves, he indicated that I would continue as manager, at least into 1986 – unless the Dodgers’ Tom Lasorda, Bobby Cox (then managing Toronto), or Chuck Tanner (Pittsburgh skipper at the time) became available. Tanner did. And I became the Braves’ advance scout.”

As the Braves’ advance scout, Wine attended a game nearly every day from February into October to study strengths and weaknesses of forthcoming Braves opponents. His findings were forwarded to the Braves manager so he could formulate strategy for the impending series with the club Wine scouted.

Wine and Tommy Lasorda enjoyed a long-standing relationship. Bobby and his wife, Fran, rented his home near Norristown, Pennsylvania, when Lasorda relocated to the West Coast for an assignment in the Dodgers’ farm system. They wound up purchasing the home from Tommy. Their three children, Robbie (briefly a major leaguer in the 1980s and later the baseball coach at Penn State University), Beth (a homemaker), and Ken, an investment manager for the Vanguard Group, were reared there. As of 2012, Bobby and Fran had eight grandchildren.

In 1988 Wine joined Chuck Tanner’s coaching staff with the Braves and stayed on under Russ Nixon and Bobby Cox until the end of the 1990 season. He returned to coaching on Dallas Green’s Mets staff from 1993 to 1996 before returning as full-time advance scout for Atlanta.

As Bobby proceeded nonstop with various big-league assignments, a second Wine generation donned baseball gear on pretty much a full-time basis. Robbie (Robert Paul Wine, Jr.) enjoyed an outstanding baseball career at Oklahoma State University. He was twice cited as an All American catcher, was a member of the Cowboys’ squad that appeared in three College World Series, and was inducted to the university’s sports Hall of Fame in 1993.

After his senior year, Robbie Wine embarked on a professional baseball career. He played in 23 games, primarily as a catcher, with the Houston Astros, wearing number 7 in the late 1980s, and later was a coach in the Milwaukee Brewers organization. He subsequently joined his alma mater’s athletic department and served as assistant baseball coach for seven years during which time the Cowboys won a Big 12 Conference tournament championship and qualified for the College World Series.

Robbie returned to Pennsylvania to become head coach of the Penn State University baseball team. In 2008 the team became the first Penn State baseballers to post back-to-back top-three finishes in the Big Ten. Coach Wine on the field donned uniform number 77, echoing his father’s number 7. Robbie’s son, Cory, started at first base on the Nittany Lions varsity before graduating. (Grandfather Bobby was advance-scouting for the Braves through 2010, and seldom got to attend Cory’s games.)

Wine’s playing career had a continual involvement with baseball firsts and lasts. He appeared in the last game played at Philadelphia’s Connie Mack Stadium, on October 1, 1970. Playing for visiting Montreal that night, Wine stroked a two-base hit to ruin Barry Lersch’s shutout during the Phillies’ 2-1, ten-inning win. It was the last double recorded in the old North Philadelphia ballpark’s 62-year lifetime. Wine and his Expos also played in the first game at the new multi-purpose Veterans Stadium on April 10, 1971, a 6-1 Phillies win.

On September 18, 1963, the day after his 25 birthday, Bobby went 1-for-4 with two RBIs in a 5-1 Phillies win over the Mets in the last game ever played at New York’s venerable Polo Grounds. His hit was a triple, the last one recorded at that old ballpark and witnessed by only 1,752 fans. He chipped in with a single for Chris Short’s shutout in the first regular-season game at Houston’s Astrodome, on April 12, 1965. On June 4, 1964, pinch-hitter Wine was the final out and the 12th strikeout victim in Sandy Koufax’s no-hit, one-walk gem in Philadelphia.

Wine was inducted into the Montgomery County (Pennsylvania) Coaches Hall of Fame in 2004. As of 2013, he was fully retired from major-league baseball but still organized fantasy baseball weeks for “old-timers.” He continued to pay close attention to his favorite game. Wine enjoyed following his grandchildren’s academic growth and athletic prowess, and remained active as an inspirational leader with community recreational programs.

The author wishes to thank Clem Comly for rewriting many parts of this biography.

Telephone interviews with Bobby Wine by the author, April 5, 2012.

Baseball-reference.com, and Retrosheet were also consulted.