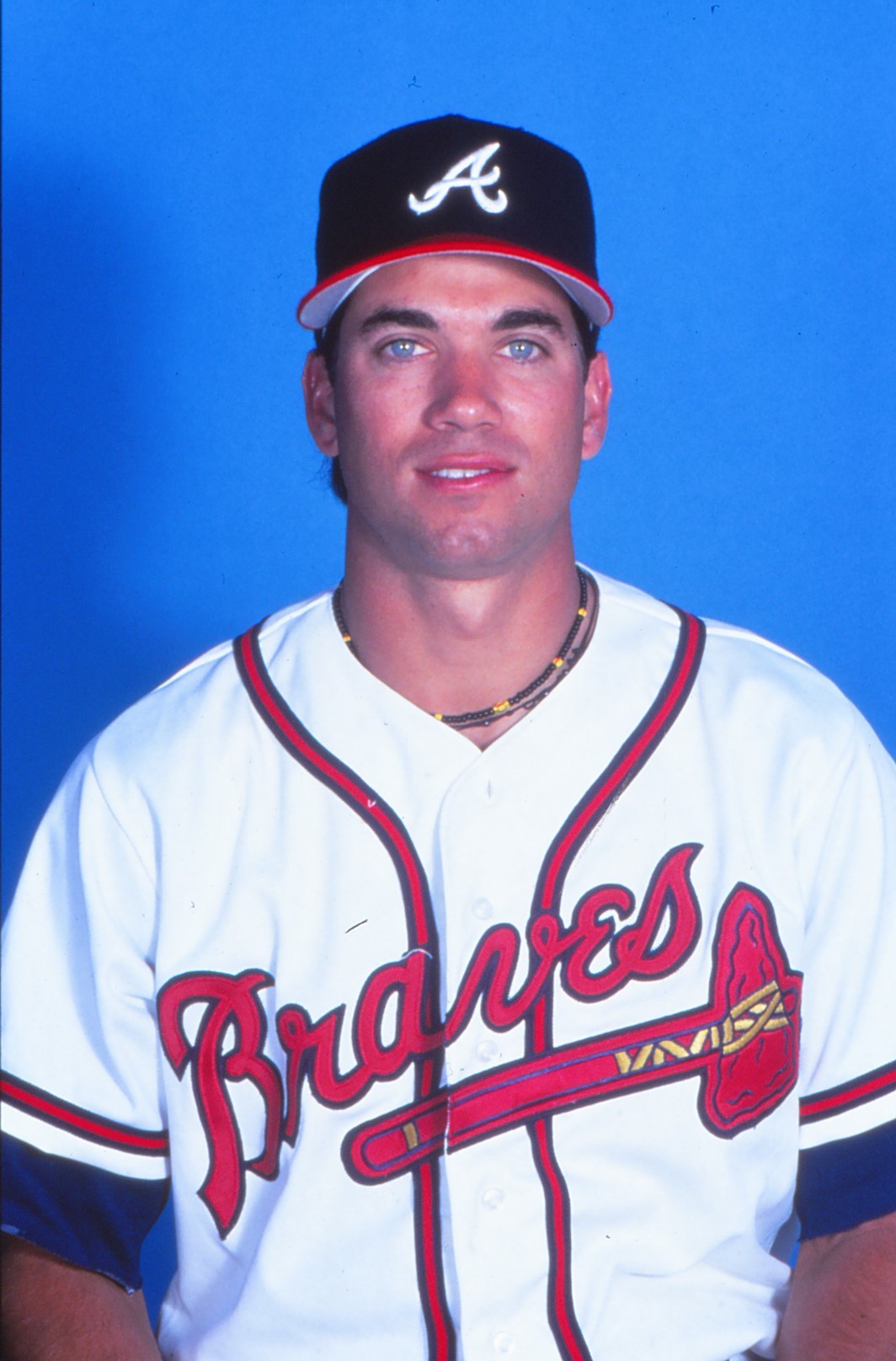 Brad Woodall was a left-handed pitcher who pitched in five major-league seasons. He played for the Atlanta Braves (1994-1996), the Milwaukee Brewers (1998), and the Chicago Cubs (1999). Woodall made 55 career appearances, 27 as a starter and 28 as a reliever. For his career, Woodall posted a 10-14 record with a 5.31 ERA. He was a switch-hitter. He was 6-feet tall and was listed at 175 pounds. Woodall was a member of the World Series champion 1995 Atlanta Braves and the 1996 National League champion Braves. He made most of his big-league appearances (31 games) for the 1998 Brewers.

Woodall was born in Atlanta on June 25, 1969, the son of James and Janet Woodall, who at some point settled the family in Blythewood, South Carolina, a suburb of Columbia. James Woodall was a small businessman and also worked for IBM.1 Attending Spring Valley High School in Columbia, Brad starred on the baseball team, which has historically been one of the state’s top programs. (Spring Valley has produced several other big-league ballplayers including Bill Landrum and Taylor Guerrieri.2)

Woodall earned a baseball scholarship to the University of North Carolina, where he became one of the top stars in the Atlantic Coast Conference. Excelling as a pitcher, first baseman, and outfielder, Woodall earned first team All-ACC honors in 1990 and 1991. He was a part of the 1989 team that reached the College World Series, its first since 1978. Woodall earned an economics degree from UNC in 1993. Twelve years later, he earned a graduate degree in entrepreneurial management from the University of Wisconsin.3

On June 10, 1991, the Braves signed Woodall as an undrafted free agent. Assigned to Idaho Falls in the Rookie-level Pioneer League, Woodall dominated as a reliever, posting a 1.37 ERA in 28 games and earning 11 saves. He finished the season with the Durham Bulls of the high Class-A Carolina League, making four appearances. Woodall split 1992 between Durham and Double-A Greenville of the Southern League, impressing in both locations. He posted a 2.13 ERA in 24 appearances for Durham and a 3.20 mark for Greenville in 21 appearances. The Grady Little-managed 1992 Greenville Braves were one of the best teams in Southern League history, posting a 100-43 record and winning the league championship with the likes of Chipper Jones, Javy Lopez, and Mike Mordecai on its roster.4

Woodall bounced around the Braves’ minor-league system in 1993, serving stints in Durham and Greenville and finishing the season in Triple-A Richmond, playing on another stacked team, filled with the fruits of the John Schuerholz-era Braves minor-league system. He worked primarily as a starter, achieving a 10-8 overall mark with a 3.64 ERA in 24 appearances (10 of which were for Richmond). In 1994 Woodall broke out as a star in the International League, posting a 15-6 record and a 2.42 ERA for Richmond, which he helped lead to the International League championship.

In the strike-shortened 1994 major-league season, Woodall also made his big-league debut. On July 22 he started for the Braves against the St. Louis Cardinals at Busch Stadium. Woodall pitched six innings, surrendering three earned runs and five hits in a 3-2 defeat, giving the 25-year-old the loss. Woodall went 1-for-2 at the plate, getting a hit off former Cy Young Award winner Rick Sutcliffe in his first major-league at-bat.

Woodall returned to Richmond for most of the 1995 season but made nine appearances for Atlanta, pitching a total of 10⅓ innings and posting a 1-1 record with an ERA of 6.10. He pitched exclusively out of the bullpen for the Braves, having trouble cracking a staff that included future Hall of Famers Greg Maddux, Tom Glavine, and John Smoltz. The unprecedented depth of Atlanta’s pitching staff in the mid-1990s proved to be a detriment to Woodall’s career, preventing him from gaining big-league experience as a pitcher in his mid- to late 20s.

In 1996 Woodall again spent most of the season in Richmond, posting a 9-7 record in 21 starts with a 3.38 ERA. He made three starts for Atlanta and a total of eight appearances. He went 2-2 and had an ERA of 7.32. Woodall spent his final year in the Braves organization in 1997, stuck in Richmond. On December 19, 1997, Woodall signed as a free agent with the Milwaukee Brewers, seeking an opportunity to kickstart his career with the Brewers, who had not had a winning season since 1992.

Woodall earned a spot in the Milwaukee rotation in 1998 and he had a 7-9 record in his only full season as a big leaguer, making 20 starts out of a total of 31 appearances. He worked 138 innings for the Brewers and posted an ERA of 4.96. Considering his ERA, Woodall’s WHIP of 1.391 was quite solid. Woodall tied for third on the Brewers’ staff in wins with Jeff Juden. The Brewers were much different than the teams Woodall grew used to in Atlanta. They won just 74 games in 1998. Woodall’s performance in 1998 proved insufficient to earn him a spot on the Brewers’ 1999 roster.

At the end of spring training in 1999, the Brewers put Woodall on waivers and the Chicago Cubs claimed him. In April and May of what proved to be his final major-league season, Woodall pitched in six games for the Cubs, starting three and posting an 0-1 mark for the season. He had an ERA of 5.63 in 16 innings pitched. Woodall spent most of the season with the Triple-A Iowa Cubs of the Pacific Coast League. Chicago granted Woodall his free agency soon after the season and he spent the 2000 season out of baseball.

Woodall made a comeback in professional baseball in 2001, spending the season with the Long Island Ducks of the independent Atlantic League. Working primarily as a reliever, he had a strong season, posting a 2.11 ERA with a 3-1 record in 34 appearances. He retired shortly thereafter.

In the major leagues Woodall had 60 plate appearances and recorded a .271 batting average with a.364 on-base percentage. He hit one home run — a solo homer off the Colorado Rockies’ John Thomson on September 3, 1998. He pinch-hit in his last game with the Brewers, on September 26, 1998, hitting a single between short and third and driving in a run. It was his third (and final) major-league run batted in.

In 43 fielding chances, Woodall made two errors, for a fielding percentage of .953.

After leaving baseball, Woodall settled in Middleton, Wisconsin, a suburb of Madison. His wife, Kari, became an assistant swim coach at the University of Wisconsin-Madison. He worked as a pitching coach in the Tampa Bay Rays organization and as an assistant baseball coach at the Madison (Wisconsin) Area Technical College, where he worked primarily with pitchers. As of 2020 he owned Woodall Baseball Academy, which trains young baseball and softball players in the Madison area. Besides offering training year-round, Woodall Baseball Academy runs fall baseball instructional leagues: a wood bat league for high-school players and a fall baseball league for elementary- and middle-school students.5

In addition to the sources cited in the Notes, the author relied on Baseball Reference.com.