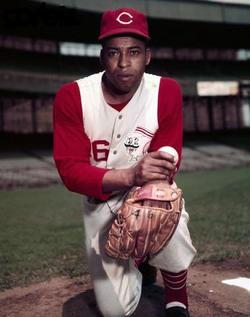 Two months after Ulysses Brooks Lawrence’s major-league debut as a pitcher for the St. Louis Cardinals in 1954, sportswriter Bob Broeg of the St. Louis Post-Dispatch described this newcomer to the team and his amazing accomplishments since arriving:

“Ulysses Brooks Lawrence, an eager-beaver of the mound with the heart of a lion, the hide of a rhino, and the stamina of a water buffalo, today celebrated an anniversary with the Cardinals—and what an amazing eight weeks.

In the equivalent of less than one-third of a major league season which is of 26 weeks duration, the husky 29-year-old right hander not only has beaten every ball club at least once, but he has scored 11 victories, almost half the Redbirds’ total in that period.”1

This description of the newly arrived rookie, along with his nickname, “The Bull”, assigned later by Cardinals manager Eddie Stanky, captures the powerful presence and positive impression made by Brooks Lawrence in his early major-league baseball career and throughout his life.2

Born on January 30, 1925, the fifth in a family of six children in the household of Wilbur Lawrence and Patsie Walker Lawrence, Brooks Lawrence began in early childhood to display some of these attributes. Some were inherited from his father, originally a sharecropper in Sparta, Georgia, who moved his family north to Ohio in 1922 after a failed harvest left him and his family in financial distress. This move demanded much courage and strength as a young family sought a better life full of aspirations, but with an unclear destination. Eventually the family settled in Springfield, Ohio, where extended family helped the newcomers make a fresh start.3

Brooks’s first experiences in the Springfield school system set a pattern that would re-emerge throughout his baseball career: standing alone and facing the challenges of being the only black student or one of just a few in a school or on a team. His efforts to cope with these situations – even more to thrive in them – led Brooks to join others as a competitor on the athletic field, an interest that started as early as the seventh grade in the late 1930s. An informal tryout on the sandlots of Springfield landed him a position on the Pump House Gang, a local team that quickly recognized his pitching potential.4 He acquired another source of strength and wisdom in the classroom, especially in classes where teachers expected students to read seriously and memorize and recite poetry reverently. Into his mature years, Lawrence maintained the love of reading and a gift for reciting poetry, often spontaneously breaking into recitation of verses learned during his formative years, for example, Kipling’s “If,” William Ernest Henley’s “Invictus,” or Will Allen Dromgoole’s “The Bridge Builder.”5 Lawrence’s erudition once caught the attention of James T. Farrell, author of the Studs Lonigan series of novels, and Farrell recommended that the ballplayer be invited to appear on The $64,000 Question quiz show. The highly controversial television show was canceled before the well-read and well-spoken Lawrence could make an appearance.6

At Kiefer Junior High School Lawrence played all positions on the basketball team, and ran sprints and relays and did the long jump on the track team. In the ninth grade he led the football squad to an undefeated season and the city championship. His performance on the gridiron appeared to project him into the position as the starting quarterback for Springfield High School when he entered the school the following year, but that expectation was not reachable at the time. His high school football coach, Jim McDonald, recognized Lawrence’s ability, but also realized the prejudices of the community against a black player as the quarterback.7 Not until his junior year, 1941-42, was the prejudice overcome and Lawrence became the starting quarterback, the first black player at the position in the high school’s history.8 He led the Wildcats to their first winning season in a decade and then added to his laurels by playing forward on the basketball team that won the Greater Ohio Basketball Championship. Without taking a break, Brooks turned his energies to track as a member of a team that won the district title and placed second in the state finals. By the end of the school year, he had won letters in football, basketball, and track.9

But why not baseball? The sport remained segregated at Springfield High School until Brooks took a stand while watching the varsity team practice. Along with some fellow athletes, he challenged the team to an exhibition game. The team accepted and Brooks exhibited his pitching potential as he and his pals won by a 15-2 score. The baseball coach, Russ Paugh, faced the dilemma of losing a talented prospect to the demands of prejudice and custom. One solution occurred to the coach: He asked Brooks to join the team for one game, the championship match, which seemed on the horizon at the end of the season. Brooks agreed but the game never materialized, because the team didn’t qualify for the championship game. This was not the last time his aspirations, for reasons beyond his control, turned out to be slightly out of his reach.10

In 1943, after graduating from high school, Lawrence was drafted and eventually sent to Guam as part of a segregated Army Engineers unit that built and repaired air bases in the Pacific.11 He and fellow soldiers were able to play baseball on company teams or on integrated teams composed of players from many units. At other times the stress of war intensified. During a Japanese air assault on a base under repair by Lawrence’s unit, he mounted a Jeep supporting a machine gun and began shooting at a low-flying plane firing upon soldiers. His action saved many lives and when he was discharged in December 1945, it was with a Bronze Star medal.12

Newly discharged, Lawrence debated with himself about whether to take a full-time job to support himself and his wife, Larcenia “Dolly” Winston, whom he had married before going overseas, or to take advantage of the GI Bill and aim for a college education.13 After briefly working, he decided to return to school, and entered Miami University in Oxford, Ohio, in 1947, the same year that Jackie Robinson broke the color barrier in major-league baseball. After playing less than two years at Miami, and getting playing time with the Springfield Tigers when school was out, Lawrence attended a tryout for the Dayton Indians of the Class A Central League, a farm team of the Cleveland Indians.14 He showed enough ability to be signed to a contract, and was sent to Zanesville of the Class D Ohio-Indiana League. He moved through the Indians’ farm system until in 1953 the Indians traded him to Portsmouth of the Class B Piedmont League, a step backward for Lawrence. About ready to change his career path entirely, Lawrence changed his mind when Mickey Owen, a major-league catcher who was managing the Caguas-Guayama team in the Puerto Rican League, recruited him for the winter-league season. Mentored by Owen, Lawrence developed a sinker, a slider, and a change-up to complement his strong curve and fastball.15

Owen also served as Lawrence’s promoter, encouraging the Cincinnati Reds to pick up his contract from Portsmouth. The Reds planned to option Lawrence to their Oklahoma City farm team, but the St. Louis Cardinals drafted him and assigned him to the Triple-A Columbus Red Birds where, along with teammate Bill Greason, he broke the franchise’s color barrier.16 After going 6-4, Lawrence was called up by the Cardinals in June, and on June 24 he launched his major league career with a 5-1 win over the Pittsburgh Pirates at Forbes Field in Pittsburgh. That victory set the pace for six more successive victories, an impressive start to his major-league career.17 Lawrence finished the season with a 15-6 record. Combined with his 6-4 record in Columbus before reaching the majors, he finished that year with 21 wins and 10 losses.

The next season Lawrence faced difficulties with ulcers which sent him to the hospital and eventually back to the minors with Oakland in 1955.18 Lawrence returned to St. Louis halfway through the 1955 season, but didn’t recapture his earlier winning form, and after the season was traded to Cincinnati.

Lawrence pitched brilliantly for the Reds at the start of the season, setting a team record by winning 13 games before losing one. The record-setting achievement landed him a spot on the 1956 National League All-Star team (the one with eight Reds on it), but he did not appear in the game. His season ended on a down note. He finished 19-10 but complained that he was not given enough opportunities to pitch in the closing days, keeping him from a possible 20-victory season.19 Whether Lawrence encountered prejudice in missing a key opportunity to succeed, like the moment in high school when he was poised to pitch in the championship game that was never played, remains an issue about which he himself, teammates, and researchers disagreed. Lawrence believed he was mistreated prejudicially by his manager, Birdie Tebbetts.20

Like other players during his era, Lawrence liked to spend the month after the close of the season on the barnstorming trail. For 30 days major leaguers were allowed to travel with a barnstorming team. In an interview, he recalled one such trip beginning in New York and ending in San Francisco, playing games on the coasts and across the South where professional baseball teams were not yet established. Along with Negro League players and teams who accompanied them, Lawrence remembered barnstorming with major-league stars like Roy Campanella, Ernie Banks, George Crowe, Hank Aaron, Willie Mays, Don Newcombe, Hank Thompson, Sad Sam Jones, and Joe Black among others.21

After retiring from the diamond, Lawrence spent several years working for the Reds in sales and customer service.22 From 1988 to 1993 he coached the baseball team at Wilmington College in Wilmington, Ohio. His teams won 97 games, lost 91, and tied 1, winning two Association of Midwest Colleges championships in the process. In 1992 Lawrence was recognized as AMC Coach of the Year.23 He also worked with the Baseball Assistance Team (B.A.T.), an organization that helps needy older players.24 He was inducted into the Springfield South High School Hall of Fame, the Ohio Baseball Hall of Fame, the Cincinnati Reds Hall of Fame, and the Wilmington College Athletic Hall of Fame. After he died on April 27, 2000, in Springfield, his family requested memorial contributions to B.A.T.

Interview by author with Brooks Lawrence conducted in Cincinnati, Ohio, on January 31, 1996.

Peter Golenbock, The Spirit of St. Louis: A History of the St. Louis Cardinals and Browns (New York: Avon, 2000).

19 Anticipation of Lawrence’s winning 20 games was evident in the press. According to “Lou Smith’s Notes” in the Cincinnati Enquirer of September 30, 1956, with the headline “Coveted 20th Target of Lawrence Today,” Reds manager Birdie Tebbetts scheduled Lawrence to pitch the final game of the season in Chicago against the Chicago Cubs, but Lawrence did not pitch in the game, which Cincinnati won. Lawrence did not make a start after September 15.