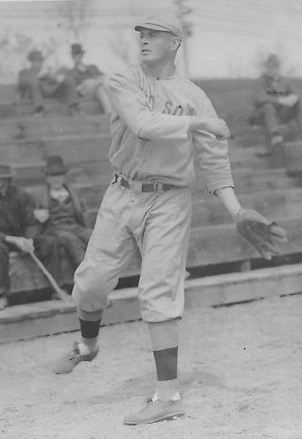 Guy Cooper pitched for two teams, the Yankees and the Red Sox. He never won a game for New York, never lost a game for Boston, and never made an error fielding for either team. Cooper came to professional baseball only after honing his craft in the United States Navy.

A native of Rome, Georgia, Guy Evans Cooper bore the nickname “Rebel” – reflective of what, we’re not quite sure. We do know that “following a youthful escapade which angered his father,” Guy enlisted in the Navy at the age of 18.i Columbus Cooper was a house carpenter in Georgia, a South Carolinian by birth. His wife Margaret (Cooper) gave birth to two children, Guy and his younger sister Merlie. Guy had attended two years of high school. He served in the Navy in 1911 and 1912, initially based in Norfolk, Virginia for training. His pay as an apprentice seaman was $16 per month.

Intrigued to learn more about the escapade, the passing of a century has frustrated that effort. His parents were both living in Ball Ground, Georgia at the time of the 1910 census. Oddly, at the time of the 1900 census Margaret C. Cooper was listed as a farmer, living at the home of her widowed mother Caroline Thacker in Conns Creek, Georgia. Margaret Thacker is listed on Guy Cooper’s death certificate. The 1900 census declared that Margaret had married in 1895. Guy Cooper is listed as having been born on January 28, 1893 in Rome.

Cooper had played baseball around his hometown but never been a standout. Not long after coming to Norfolk, he joined the St. Helena Naval Training Station team and put up a 13-1 record, helping lead the team to the 1912 championship of the Norfolk Amateur League and attracting the attention of baseball scouts for the Virginia League. While with the Navy, Cooper reportedly also was the “middleweight champion of the Atlantic squadron.” ii

Cooper (and most of the team, for that matter) completed their training and were assigned to the U.S.S. Vermont, a battleship stationed in Guantanamo and then to a Mexican port in the Caribbean where he played baseball all winter long. The ship returned to Norfolk in the springtime of 1913, and he was offered a contract to pitch for the Class C Petersburg Goobers (Virginia League); the team had reportedly “arranged for his discharge from the service.”iii What the arrangements were remains unclear, but more than one publication referred to Petersburg as having “purchased his release” from the Navy.iv

His salary jumped to $150 per month, and he earned it, pitching to a 16-5 record as a Goober, helping that team win the league championship. He also hit for a .360 average. These fine numbers roused interest from the New York Yankees and the Brooklyn Superbas. Eventually, Frank Chance’s Yankees bought his contract from Petersburg for $1500. The purchase was announced on August 11, 1913. Cooper was signed for 1914 on January 9 for $250 a month.v

He was an even six feet tall and 170 pounds during the Yankees’ spring training at Houston. Early reports from intrasquad work were that “New York batters who have faced his pitching are of the opinion that Cooper will develop into a big league pitcher.”vi He threw right-handed and hit from both sides of the plate, though more frequently left-handed.

It naturally attracted attention when the Yankees played an exhibition game against the Army’s 22nd Infantry team at Texas City on March 17. The soldiers knew they were facing a Navy man, but couldn’t get more than one hit off him in the four innings he pitched. The Yanks won, 15-2.vii

He broke camp with the team and pitched in his first game on May 2 in Washington. The Senators were up, 11-1, when he came into the game to throw the final three innings. He faced 13 batters, walking two and giving up three hits and three runs, all earned. It proved to be his only appearance for the Yankees. On May 27, feeling they had a sufficient pitching staff and were more anxious to get better catching, they sold him to the Boston Red Sox. “Cooper should develop into a rattling pitcher for the Red Sox,” reported a New York paper.viii

Cooper first pitched for the Red Sox in the ninth inning of the second game of a June 2 doubleheader. He walked one but didn’t surrender a hit as the Sox lost to Philadelphia, 4-2. He won his first start, on June 9 in Cleveland. The score was 1-1 after five innings, and was removed for a pinch hitter in the top of the sixth. The Red Sox scored seven runs in that half-inning and so the “W” was his.

On June 28, Cooper pitched a three-hitter against the Long Branch Cubans in an exhibition game at Long Branch, New Jersey. After he gave up seven hits in the July 3 game with Washington (a 12-0 loss), the Red Sox sent him to Providence – though Boston seems to have help a string on him.

On August 22, the Red Sox bought back the contracts of two Providence pitchers, George Ruth and Guy Cooper, but agreed to leave them with the Grays for the remainder of the season. Ruth had pitched one more inning for the Red Sox than had Cooper, and had a 2-1 record in 1914. Cooper’s final two innings of work for the 1914 Sox came near the end of the season, a 3-2 loss to the Yankees. Cooper wasn’t charged with the loss but he should have been. The score was 1-0 New York through seven innings. The Yankees scored twice in the top of the ninth and Boston matched that with two runs in the bottom of the ninth, so the loss was given to Ernie Shore, who’d let New York score once way back in the first and then thrown six scoreless innings. Cooper finished the season with a 1-0 record, throwing 22 innings in nine games, with a 5.32 ERA.

Cooper was brought to Hot Springs, Arkansas, for evaluation in the 1915 exhibition season, but fell short of making the grade. He was released to Providence on April 11 and had a 13-13 season for the Grays. After the International League season was over, Cooper joined the Red Sox and got into one game for the pennant-winning Boston team, throwing the final two innings of an 8-4 loss on September 24 against the St. Louis Browns, without giving up a hit but walking two. He thus had a 0.00 ERA in his last, final, appearance in the majors.

Because he never returned.

The 1915 Red Sox won the World Series, and repeated again in 1916. They had strong pitching, and Cooper was not needed. He only appeared in a dozen games in 1916, with a combined 2-6 record for Richmond and Buffalo. He was released by Buffalo in July. Apparently, he suffered a physical malady of some sort because in mid-March 1917 Sporting Life said that he was expected to pitch for the Indianapolis Indians, or to be farmed out by them. He was “said to have fully recovered from his long illness.” ix The April 17 issue said that Cooper “gives promise of a comeback this season, having entirely recovered from a severe spell of sickness that handicapped him the whole of last season.”

The Santa Monica Evening Outlook reported that he returned to military service during the First World War, and therefore did not pitch in 1917. He returned to pro ball in 1918, going 9-6 for Buffalo, even though baseball shut down early and so many players were joining the war effortx

Cooper pitched on the Pacific Coast from 1919 through 1921. He worked relatively little in 1919 and 1920, throwing a total of 64 1/3 innings over the two years for five clubs: Portland, Salt Lake, Vernon, Seattle, and Sacramento.

The 1920 census had Cooper as a lodger in a home in Lassen, California working as a nailing contractor in box factory. That was the year he married Ethel Burnside; the couple spent most of the rest of their lives in Santa Monica.

Throughout he had played independent ball from time to time, with Sawtelle and Santa Monica semipro teams. In November 1925, he talked about organizing a more professional team in Santa Monica, but nothing came of it.

Cooper ran a billiard hall in Santa Monica until he was hospitalized for a brain tumor at Los Angeles General Hospital on July 24, 1951. He died nine days later on August 2, 1951.

In addition to the sources noted in this biography, the author also accessed Cooper’s player file from the National Baseball Hall of Fame, the Encyclopedia of Minor League Baseball, Retrosheet.org, and Baseball-Reference.com.

i Philadelphia Ledger, undated Sunday newspaper clipping from January 1915 located in Cooper’s player file at the National Baseball Hall of Fame. This article provides a good deal of the information regarding Cooper’s time in the Navy.

x Santa Monica Evening Outlook, August 3, 1951. His second stint in the service is confirmed on his death certificate.