This article was written by Dick Leyden 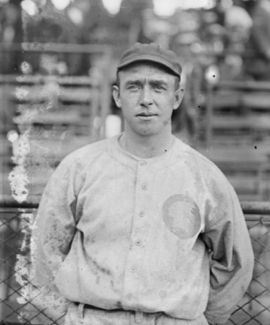 Though he stood only 5' 9.5" and weighed just 160 lbs., Dick Rudolph was a large component of George Stallings' "Big Three" that helped lead the 1914 Boston Braves to their miraculous pennant and World Series sweep. "He was the bellwether of the pitching staff," said Braves coach Fred Mitchell, "and being a little fellow, I believe his success had much to do with big Bill James and George Tyler putting out that little extra effort to keep pace with the cocky kid from the Bronx."1 Unlike the hard-throwing James and Tyler, Rudolph was a "pitching cutie" who relied on his great curveball and spectacular control. He also threw a spitball, but "about the best you could say for it was that it was wet," recalled his catcher Hank Gowdy.2

Richard Rudolph was born in New York City on August 25, 1887. All he ever wanted to do was pitch in the big leagues. Late in the summer of 1905 he mailed the following letter to Garry Herrmann, owner of the Cincinnati Reds:

Dear Sir,
According to the league schedule your team will be in New York and Brooklyn the latter part of this month. I would like to have a chance to pitch against the Brooklyn team for your club to show my ability, as I would like to be with your team next year. Or if preferable against the New York National League team. It don't make any difference to me. All I want is a chance to show what I can do. And I think that now is as good a time as any, as I am sure you will not regret the favor.
Hoping that you can see your way clear to grant my wish, I beg to remain,

Ignored by Herrmann, young Rudolph enrolled that fall at Fordham University and played baseball there the following spring. When he learned that the "outlaw" Northern League had sent collegians like Ed Reulbach and Jack Coombs to the majors, he headed to Vermont to pitch for the Rutland team that also included Eddie Collins. When that team folded, Rudolph joined New Haven of the Connecticut State League for the rest of the summer. He did well enough that he decided not to return to Fordham, but to devote all of his energy to pursuing his dream of pitching in the major leagues.

Ed Barrow signed Rudolph to a 1907 Eastern League contract with Toronto. "Baldy" was a fine minor-league pitcher, posting 13, 18, 23, and 23 wins in 1907-10. Back in New York, his brother, who worked at the old New York Press, kept his name in the local papers by planting stories of the "It's a crime that Rudolph doesn't get called up" type. At the close of the 1910 season the New York Giants gave him a shot, probably at the behest of Toronto manager Joe Kelley, John McGraw's old Baltimore Orioles teammate. "He has terrific speed, good control, is a quick thinker and mixes up his 'assortment' as well as any twirler in the big leagues," Kelley said. "I look for him in a few years to be even or as great as Mathewson."4

As it turned out, Matty had no immediate worries. Rudolph mopped up in two Giant wins, and then got the starting assignment of which he had dreamed. It was a nightmare. The Phillies pounded him for 15 hits and the Giants lost, 8-2. The Press was forced to change its tune: "Dick Rudolph, from the wilds of the Bronx, found his path strewn with base hits when he made his first local appearance [in a major-league uniform]."5 Rudolph was again hit hard in an April 1911 appearance, and that was enough for McGraw. Back in Toronto Dick posted 18- and 25-win seasons, good enough to lead the International League in victories and winning percentage in the latter season. It has been said that Rudolph's size and prematurely thinning hair (making his real age appear suspicious) contributed to McGraw's decision not to bring him up again, despite his great success in Toronto.

Convinced that he had to get back to the majors soon if he was ever to get back at all, the 25-year-old Rudolph returned to his old strategy of self-promotion. He found a sympathetic ear in Fred Mitchell, third-base of the Boston Braves. "I was going south in 1913 to join the Braves, who were training at Macon, Georgia, that season," Mitchell recalled. "A young fellow got on the train in New York. Apparently he knew me, but I didn't know him. After a while he came over to my seat and asked me if I was a ballplayer. I told him I was a coach for the Braves. He told me he was Dick Rudolph of the Toronto club, but was thinking about quitting if he wasn't sold to the major leagues. 'I know I can pitch better than some of those fellows in the Big League,' said Rudolph, 'if I only get the chance. But if I don't, I'm quitting anyway.' Well I had a talk with him, and found he had a good record in Toronto, but that John McGraw had not given him much of a look. I told him not to be too hasty about quitting. I advised him to get in shape and maybe [the Braves] would be interested in his services. He did as he was instructed. After he was beaten by the Newark club 1-0 in his opening game, he turned in his uniform and said he was through. He then got in touch with me again. I got in touch with Jim McCaffrey, the owner of the Toronto club, and asked what he wanted for Rudolph. Jim (for whom I had previously played) said, 'Oh, he'll be back in a couple of days.' I told him he wouldn't, and he better sell him to the Braves. Well after a couple of days when Rudolph failed to return, McCaffrey got in touch with us and agreed to let us have him for $5,000 and a pitcher named Brown. That was one of the greatest bargains that [Braves owner] James Gaffney ever got in his life."6

Rudolph became an immediate success in Boston, posting a 14-13 record and 2.92 ERA in 1913. Mitchell attributed the rookie's solid performance to his brains and cunning. "He was one of the smartest pitchers who ever toed the rubber," said the Braves coach and future manager. "He wasn't fast but had a good curve ball, which he mixed with a spitball, and he could almost read the batter's mind. I've often sat on the bench with him and heard him tell whether a batter would take or hit. He made a real study of the profession."7 During the miracle season of 1914 Rudolph won a total of 26 games, including 12 consecutive victories. On Labor Day he beat Mathewson, 5-4, in the first game of a morning-afternoon doubleheader to move the Braves into first place, which they locked up for good after a loss in the afternoon game with a win the next day. In the World Series Rudoph beat Chief Bender, 7-1, in Game One, and Bob Shawkey, 3-1, in Game Four.

Over the three-year period 1914-16, Rudolph was one of baseball's best and most durable pitchers, hurling over 300 innings each season. His performance in 1916 may have been even better than 1914; though he won seven fewer games, he lowered his ERA from 2.35 to a career-best 2.16 and led the NL with 8.9 base runners allowed per nine innings. Dick developed arm trouble in 1918, when he pitched just 154 innings. Though he bounced back with one more workhorse season in 1919, he pitched in only 25 games over the next eight years, when he was more of a coach than a pitcher. Rudolph left the Braves after the 1927 season, retiring with a career record of 121-108 and a 2.66 ERA.

The following year Rudolph and the Braves' traveling secretary bought the Waterbury, Connecticut, club in the Eastern League. They lasted but one losing season. Dick then joined his brother in a Nyack, New York, undertaking business for a few years. Eventually he returned to baseball, this time as the supervisor for Stevens Brothers Concessionaires at Yankee Stadium and the Polo Grounds. Closing the circle of his baseball career, he returned to Fordham as a volunteer freshman baseball coach. Dick Rudolph died of a heart attack in the Bronx on October 20, 1949, at the age of 62, and is buried in Woodlawn Cemetery.

A version of this biography originally appeared in "Deadball Stars of the National League" (Potomac Books, 2004), edited by Tom Simon. It is also included in "The Miracle Braves of 1914: Boston's Original Worst-to-First World Series Champions" (SABR, 2014), edited by Bill Nowlin.

2 Undated clipping in Rudolph’s player file at the National Baseball Hall of Fame.

3 Letter of August 16, 1905 in Rudolph’s player file at the National Baseball Hall of Fame.

4 1910 Who’s Who in Sport, author unknown, in Rudolph’s player file at the National Baseball Hall of Fame.