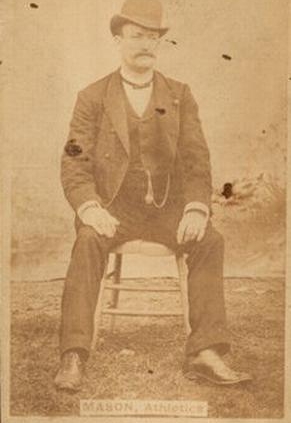 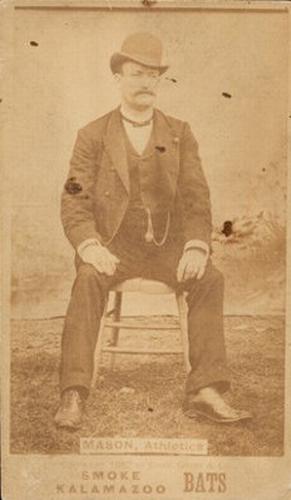 Charlie Mason was a co-owner and, for one game, a player for the 1883 American Association pennant-winning Philadelphia Athletics. He held other jobs throughout his baseball career and was an innovator, credited with conceiving the ladies day promotion and the rule that gave batters first base after they were hit by a pitch.

Charles Edward Mason was born on June 25, 1853, in New Orleans. It’s difficult to confirm his parents’ names or at what point in his childhood he moved from Louisiana to the Northeast. “Little is known of Mason’s early life,” is how one author phrased it.1

Mason attended Williams College in Williamstown, Massachusetts, in the early 1870s and played for baseball teams in nearby Adams and Pittsfield, Massachusetts, while there.2 He was primarily a first baseman and outfielder and he hit and threw right-handed. His professional debut came in 1875 with the short-lived Philadelphia Centennials of the National Association, who folded on May 24 after a home loss in front of only 100 fans. Mason batted .234 with three RBIs as the Centennials went 2-12 in their only major-league season.

The Centennials’ demise left Mason seeking a new team to play for. He and teammate Sam Field joined the National Association’s Washington Nationals, another bumbling club that folded at midseason with a 5-23 record. Mason batted .091 (3-for-33) with the Nationals, but he remained persistent and played for a third team in 1875, finishing the season with the Ludlows in Kentucky.3

Mason’s offensive and defensive skills earned him additional playing opportunities. One appraisal said he could “do good execution with the bat, being especially effective at critical junctures, and also a very clever baserunner. He, however, more particularly excels at first base, where he has few if any superiors, pluckily facing and holding the swiftest and wildest throwing, some of his catches and stops being extraordinary.”4

He signed a one-year, $700 contract with the National Association’s Philadelphia White Stockings on December 3, 1875, but was left without a job when the league disbanded on February 2, 1876.5 Mason ended up splitting the 1876 season with the independent Philadelphia Pearls and a club in Harrisburg, Pennsylvania.

It was also in 1876 that Mason umpired his only major-league game.6 He was behind the plate for the Louisville-Philadelphia contest at the Jefferson Street Grounds on May 26, and the box score referred to him as “Mr. Mason.”7

Mason played for two International Association teams in 1877, the Lynn Live Oaks and Rochester. While with Lynn, Mason was a teammate of curveball pioneer and future Hall of Famer Candy Cummings.

In 1878 Mason played for the Philadelphia Athletics when they weren’t a major-league team.8 He traveled west in 1879 to play for the Northwestern League’s Davenport (Iowa) Brown Stockings, a team that included another future Hall of Famer, gloveless defensive virtuoso Bid McPhee. In 1880 and 1881, Mason was back in Philadelphia playing outfield for the Athletics.

By 1882, Mason was “the owner of a saloon and bookie joint”9 and was ready to expand his portfolio. He partnered with sporting-goods salesman Billy Sharsig and minstrel show performer Lew Simmons to secure a ballpark lease and put up the money required to enter the major-league American Association. The three owners became known as “The Triumvirate” and brought major-league baseball back to Philadelphia for the first time since 1876.

Mason’s primary job at first was acquiring players. He “scoured the states himself and brought some of the best players obtainable to the A’s.”10 Nineteenth-century scouting required negotiating with minor-league clubs to purchase desired players, a process illustrated in this newspaper description: “Mr. Mason came from the East. He visited Haverhill and tried to purchase the services of (Chippy) McGarr, the noted short stop. The Haverhill management refused to deal, however, but Mr. Mason has every promise that McGarr will sign with the Athletics for next season.”11

On the Fourth of July in 1883, Mason was the central figure in a scene that would be inconceivable in modern major-league baseball. The Athletics were in Louisville for a doubleheader and Philadelphia catcher Jack O’Brien passed out from sunstroke in the sixth inning of the first game. Cub Stricker moved from second base to fill in at catcher and other Athletics repositioned, leaving Philadelphia without a right fielder or any bench players.

Mason was in the stands watching the situation unfold and he decided to volunteer his services. He rolled up his pants, walked through the gate and went to right field “doffing his plug hat and striped coat.”12 He caught a fly ball barehanded and got two late-game at-bats, going 1-for-2 with an RBI single.

With a roster partially constructed by Mason, the Athletics went 66-32 in 1883 and led the American Association in hits and runs. They competed in a tight pennant race down the stretch and edged the second-place St. Louis Browns by one game, clinching the title at Louisville on September 28 in their next to last game of the season. It was an especially memorable day for Mason, who married Kate Bayne Cook in Philadelphia on the same day the Athletics secured the pennant in Louisville.13

The team returned to Philadelphia and received a torchlight parade with celebratory flags flying.14 Players attended a banquet and received personalized gold badges to commemorate their championship. Mason gave star player Harry Stovey a gold watch and chain because Stovey’s “extraordinary grace and drive had sustained the club during its crucial final six weeks.”15

The league championship was good for business. Mason and his partners made a $50,000 profit in 1883. “Fans flocked to Athletics’ park, and, playing in a league still in its early stages, the triumvirate balanced very large revenues against small player payrolls and benefited from the (Association’s) lack of a percentage system for determining visiting teams’ gate shares, which would have enabled other clubs to share in the Philadelphia gravy,” one historian observed.16

“Back in 1883 we did our own accounting,” Mason explained. “With my partners, Simmons and Sharzig [sic], I sat in our dingy little ticket office down at the old Athletics Park, 26th and Jefferson streets, and there we counted the quarters, dimes, nickels and pennies — yes there were ‘coppers’ in our receipts — and the money was placed in three equal piles. When the three partners were satisfied the count was correct, each pocketed his third of the day’s receipts.”17

Mason continued working as an Athletics executive before moving to the dugout in 1887 for the only major-league managing assignment of his career. The Athletics were 26-29 and in fifth place on June 29 when manager Frank Bancroft was fired and replaced by Mason. Philadelphia went 38-40 for the remainder of the season under Mason, who was not brought back to manage in 1888. Sharsig replaced him and became the Athletics’ fourth manager in four years.

The Triumvirate wasn’t thriving financially as it had in 1883 and “by the fall of 1887 they had to reorganize to take in new investors from among the Philadelphia business community.”18 Mason’s role with the Athletics faded in 1888 and he moved on to a new, ambitious plan — indoor baseball.

Mason booked the main building on the state fairgrounds in Philadelphia and arranged a full-size infield there. The indoor outfield was much smaller than ballpark outfields, but Mason counterbalanced the small dimensions by using deadened baseballs with cork centers. There were ground rules specific to the indoor facility, like batters receiving automatic doubles on balls hit into the stands.

The first Mason-organized indoor game was held on Christmas Day in 1888 and players from the two major-league teams in Philadelphia participated. The game was a disappointment; only 2,000 people came to the arena with a capacity of 5,000. “The number of posts and braces in the building also acted as a drawback, and the bad light rendered the catching of a swiftly thrown ball difficult and hazardous business,” the Boston Globe noted.19

Mason returned to outdoor baseball in the spring of 1889, managing the minor-league Philadelphia Giants of the Middle States League while simultaneously serving as the league’s president.20 In 1890 he managed the Eastern Interstate League team in Allentown, Pennsylvania, where future Hall of Famer Hughie Jennings was one of his players.

Mason also showed honesty in Allentown on days he had to leave the dugout to be a fill-in umpire. A hometown sports reporter wrote, “Charley [sic] Mason is one of the few managers in the country who can go in and umpire a thoroughly impartial, first-class game, in which his team is one of the contestants. Some managers would seize upon this golden opportunity to help his team out, but Charley Mason is not built that way.”21

His disposition was also praised in an article of unknown provenance found in his National Baseball Hall of Fame Library player file: “His coolness in critical emergencies, and his judgement in availing himself of every point of play offered may also be mentioned as marked characteristics. In all of his professional career he has maintained the reputation of a hard-working and reliable player.”22

Late in his life, Mason worked as a clerk,23 a superintendent of a ballclub,24 and a ballpark cashier.25 He died at his home in Germantown, Pennsylvania on October 21, 1936, at age 83. He was survived by his second wife, Sarah A. MacGregor, daughters Anna and Margaret, and sons Charles and William. William was “the star pitcher of the Wildwood, N.J. independent team” as a teenager.26

Obituaries credited Mason with multiple noteworthy innovations. “‘Ladies’ Day’ was conceived by Mason when he noticed that women didn’t attend ballgames,” one of his obituaries noted. “They were invited by the Athletics management, so they came in large numbers and evinced interest.”27

Mason certainly could have come up with the Athletics’ ladies day promotion on his own, but at least one SABR historian pointed out that other clubs offered women free admission in the mid-1860s, long before Mason worked in Philadelphia.28

The Philadelphia Inquirer credited Mason with another significant development: “The ruling, still in force today, that a batter hit by a pitched ball should take first base, was suggested by Mr. Mason.”29 Other summaries were more skeptical. One author described Mason as “claiming to have suggested the hit by pitch rule.”30

So Mason wasn’t present for the key league meetings that decided the hit-by-pitch rule, but he was considered the baseball expert among the Triumvirate, so it’s possible he pushed the idea to Sharsig, Simmons, or other colleagues leading up to the decisive meetings.

Rulebook innovator or not, Charlie Mason made his mark on nineteenth-century baseball, especially the 1883 American Association champions.