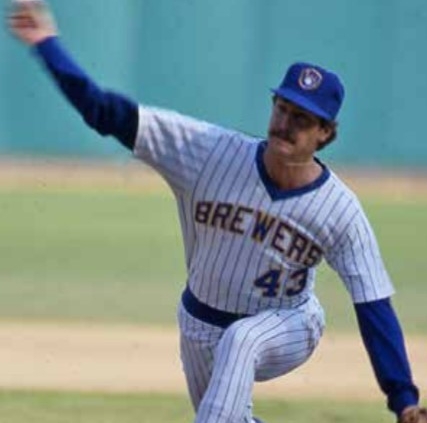 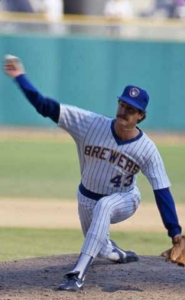 In the Who Gave It Up? category of baseball trivia, ballplayers are known for certain batting accomplishments, but the opposing pitchers who served up those opportunities are sometimes not remembered. Milwaukee Brewers fans can probably remember Robin Yount’s 3,000th career hit, but can they recall who gave up the hit? Many baseball trivia buffs know that Los Angeles Dodgers southpaw Al Downing gave up Hank Aaron’s historic 715th home run on April 8, 1974, at Atlanta Stadium, while Hammerin’ Hank was still playing for the Atlanta Braves. The great Aaron played his final two seasons in Milwaukee and hit his record-setting (and final) 755th home run at County Stadium. Who was the pitcher?1

Milwaukee’s Chuck Porter fits into this Who Gave It Up? category. The longest official game in major-league history took place on May 9, 1984, between the Brewers and the Chicago White Sox. The two teams battled to a tie for 24 complete innings before Chicago won the contest in the bottom of the 25th with a walk-off home run by Harold Baines. Who gave it up? Chuck Porter.

Charles William “Chuck” Porter III was born on January 12, 1955, in Baltimore, the third child and only son of Charles William “Bud” Porter Jr. and Elizabeth (Snyder) Porter.2 The Porters lived just north of Baltimore, and their ancestors had been in America about 100 years, having immigrated to Maryland from the Bavarian village of Donnersdorf in 1860. Chuck attended Perry Hall Senior High School and played baseball and football. He earned all-state baseball honors and was named team captain his senior year. His success earned him the 28th-round draft pick of his hometown Baltimore Orioles,3 but he chose not to sign. He was one of four Marylanders drafted by Baltimore in the regular phase. Instead, the 6-foot-3 right-handed pitcher decided to attend Clemson University.

While pitching for the Clemson Tigers in college, Porter was primarily a starter. In his freshman campaign, he pitched in 11 games with seven starts, finishing with a 4-2 record and a 2.58 earned-run average. He doubled his win total in his sophomore season, then enjoyed national success as a junior. He pitched 119 innings in 14 starts, striking out 75 and allowing 29 earned runs. His 12-0 record, 2.19 ERA, and 1.92 strikeout-to-walk ratio were the primary reasons Porter was named 1976 Atlantic Coast Conference Player of the Year. Clemson played in the 1976 College World Series (the first to two consecutive trips). Porter entered the 1976 free-agent draft and was selected in the seventh round by the California Angels. The Angels assigned him to Quad Cities of the Class A Midwest League. Porter pitched 101 innings for the second-place team and won five games.

Porter posted a 20-2 record in 1977, pitching for both Salinas of the Class A California League and El Paso of the Double-A Texas League. He had his only professional at-bats in 1977, while playing for Salinas.4 In three times at the plate, Porter had one hit (a solo home run!), and he finished his professional career with a .333 batting average and 1.333 slugging percentage. Porter’s batterymate at Salinas was catcher Joe Maddon, who went on to manage the Angels, Rays, and Cubs.

The next season saw Porter split time between El Paso and Triple-A Salt Lake City (Pacific Coast League). The 23-year-old struggled in Salt Lake City, posting a record of 0-5 and allowing 29 runs in 24 innings, but he was 10-5 in El Paso. In 1979 Porter stayed in Salt Lake City, making 31 appearances. He pitched 137 innings but only two complete games, and had a 5-9 record.

While in the Angels’ farm system, Porter developed tendinitis in his pitching arm. The Angels released him during spring training, on March 31, 1980. He signed with the Brewers as a free agent on May 16, beginning the season with Burlington (Iowa) of the Midwest League. By June he had moved up to Holyoke (Massachusetts) of the Double-A Eastern League. Fran Sypek of the Springfield Union wrote, “He’s a reclamation project … cast adrift by one organization, but given a second baseball life by another. That’s the Chuck Porter story and judging by his recent success, the Holyoke Millers have themselves quite a find.”5 By the end of July Porter was 4-0 with the Millers. His wife, Eileen, recalled the situation: “It was discouraging that California gave up on Chuck after his arm operation. We had to face his not making it then. He called around, but when no one was interested, he asked the accounting firm he was working for part-time for a full-time job and I started looking for a full-time job.”6 Fortunately for the Porters, the Brewers answered the call.

In 1982 Porter was once again assigned to Vancouver after spring training. And once again, in September, he was pitching in Milwaukee. He made three appearances out of the bullpen, pitching in both ends of a crucial doubleheader against the Orioles. Unfortunately for him and his family, his mother, Elizabeth, died on May 1, 1982 and did not get to see him pitch at the major-league level. As the 1982 season ended, the second-place Birds swept the twin bill from the Brewers, cutting their lead to one game with one game to play. Baltimore won the 162nd game of the season against Milwaukee as well, as Porter watched from the bullpen. On Sunday, October 3, the Brewers exploded for 10 runs against Jim Palmer and the Orioles, clinching the East Division title and sending them to the League Championship Series against the California Angels. Porter did not play in the postseason. He was a spectator as the St. Louis Cardinals beat the Brewers in a seven-game World Series.

After Milwaukee’s magical season ended, Porter decided to play winter ball in Puerto Rico, to be able to “come to camp and be in good shape and ready to go.”7 It worked. The young right-hander made the 25-man roster. Although not considered a power pitcher, Porter consistently threw his fastball at 86 mph and the experience in Puerto Rico established him “as a genuine major leaguer at age 28.”8 He told reporters, “Now the ball’s in my own hand. I got the break. Now it’s up to me to out there and do the best I can.”9

In the 1983 Milwaukee Brewers Media Guide, directly under Porter’s information is a small fact box titled “The Long and Short of Things.” It describes both the shortest game by time in Brewers history (May 6, 1972, which lasted only 1 hour, 31 minutes) and the longest by innings (six days later on May 12, 1972 — a 22-inning affair that lasted 5 hours and 47 minutes).10 How could the sports information team know to associate Porter with Milwaukee’s longest game to date?

The Brewers called up Porter from Vancouver on May 2, 1983. He pitched in 25 games and finished the season with a record of 7-9 and a 4.50 earned-run average. A highlight came on August 6, when he pitched his first shutout, a 3-0 win over the Toronto Blue Jays. Porter scattered six singles and struck out three in pitching his fourth complete game. He told The Sporting News, “I decided to take it one inning at a time. The fact that it was a close game kept me going. I had to bear down because every pitch and every hitter was important.”11

Porter anticipated starting the 1984 season back with Vancouver. When spring training came around, he wasn’t sure where he should rent an apartment, in Vancouver or Milwaukee. He said, “I didn’t consider myself a long shot, but at the same time, I didn’t have the ball club made.”12 Said The Sporting News, “if all the [Brewers] veterans were healthy, there wouldn’t be any room for the youngsters.” Those veterans included Bob Gibson (not the Hall of Famer), Tom Candiotti, and Jaime Cocanower. Yet Porter made the trip to Milwaukee for the start of the season. He made four short relief appearances before starting on April 28 at Yankee Stadium. He scattered five hits in six scoreless innings as the Brewers bested the Yankees, 8-0. Porter then dueled New York’s Phil Niekro on May 4 in Milwaukee, matching the future Hall of Famer with shutout pitching for eight innings. In the bottom of the eighth, the Brewers manufactured a run on an error, a walk, a hit batsman, and a sacrifice fly and won the contest, 1-0. Rollie Fingers came on for his fourth save, preserving Porter’s victory.

Porter’s next appearance was the historic game between the White Sox and Brewers. The night game at Comiskey Park was tied 3-3 after nine innings, and it was still tied by the same score after 17 innings, when umpires suspended play due to curfew. Both teams came back the next day and continued play. Milwaukee started fast, with runners at first and third and only one out in the opening frame, but Cecil Cooper grounded into a double play to end the threat. Porter started the bottom of the 18th, and he was the only Brewers hurler for the next seven-plus innings. Porter faced 36 batters, striking out five but allowing 11 hits. Each team scored three times in the 21st inning, and the game continued on. The White Sox rallied in the 23rd, but Dave Stegman was ruled out at third on a coach’s interference call, and the game continued. The longest game in major-league history ended in the 25th inning. After Porter struck out Stegman on an attempted bunt, the White Sox’ Baines blasted the 753rd pitch of the game out of the park, giving Chicago a walk-off 7-6 win.

Porter won his next three starts, lowering his ERA to 1.75. He reinjured his elbow midway through the 1984 season. He pitched 2⅔ innings on July 20 against the Oakland Athletics, allowing four runs on five hits and a walk. He had surgery on August 2 to repair a torn ligament in his right elbow and was finished for the season.13 He missed almost all of the 1985 season as well, appearing in six games in September and October, pitching 13⅔ innings with only one start. Porter appeared in his final major-league game on October 6, 1985, working four innings and yielding four hits.

Porter spent the offseason pitching in the Puerto Rico League. By January 1986 he had made six starts and posted a 2.08 ERA, pitching his first complete game five weeks into the season. He was “happy with that game. Not because of the one-hitter. I finally pitched a complete game — started and finished it myself.”14

The right-hander was still part of the Milwaukee system in 1986, but he never made it back to County Stadium, instead pitching again in Vancouver. On September 30, 1986, the Brewers released the 31-year-old Porter, and he hung up his glove.

In 10 minor-league seasons, Porter compiled a record of 70-61. He pitched 48 complete games and had six shutouts. At the big-league level, in parts of five major-league seasons Porter pitched 237 innings in 54 games with 34 starts. His 13-13 career record included seven complete games, one shutout, and an earned-run average of 4.14. He struck out 136 batters.

Four months after his baseball career was finished, Porter, his wife, Eileen, and their sons, Bryan and Christopher, moved back to Perry Hall, Maryland, and bought the family house where he grew up. Chuck and his wife started Porter Landscaping, which “has provided landscaping services for the Baltimore Metro area and surrounding counties since 1989.”15

In addition to the sources mentioned in the Notes, the author consulted Chuck Porter’s file from the Giamatti Research Center at the National Baseball Hall of Fame and Museum; baseball-reference.com; and retrosheet.org.

2 Chuck had a sister, Linda, who died at a year old in 1949, and another sister, three years older.

4 Porter did have one plate appearance with the Salt Lake City Gulls in 1979, drawing a walk, giving him an on-base percentage for the season of 1.000.

7 Undated newspaper clipping from Porter’s file at the Giamatti Research Center at the National Baseball Hall of Fame and Museum. Posted to the file on August 7, 1983.