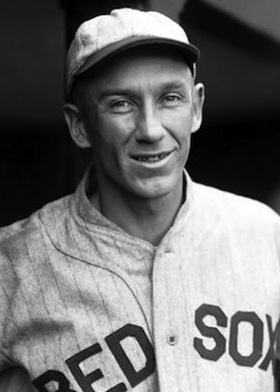 ONE DEAD, FIVE HURT IN WRECK – Los Angeles Times, March 24, 1929. The one who was killed was Portland Beavers center fielder Denny Williams. The five injured were other players on the team, hurt when their automobile overturned near San Clemente, California. They were on their way to spring training at Santa Ana, California, after playing a game in San Diego. The Times story quoted catcher Tony Rego, driver of the car containing the Portland players. He said a southbound car had sideswiped them as he rounded a curve, causing his car to swerve and then topple over the embankment, rolling over three or four times before crashing into a large boulder at the bottom of the incline and landing right side up with the headlights still on. The other car did not stop. It was around 9:30 at night, and the roads were slick with rain. Rego’s wheels gripped mud on the side of the road, as he pulled over to avoid the oncoming car, and then Rego lost control.

Williams had been in the middle of the front seat, between Rego and Curt Fullerton. He was pulled from underneath the wreckage. Williams died in the arms of teammate George Wuestling, conscious until the end as the pair were being rushed to a hospital.1 Fractured skull was the diagnosis.2 The others injured besides Rego and Wuestling were Williams’s former Boston Red Sox teammate Fullerton, Mack Hillis, and Art Jahn. Fullerton and Williams had both been on the Red Sox in 1924 and 1925.

For Denny’s wife, Thelma Elizabeth (Duff) Williams, it was a tragic week. She was in her home city of Mobile, Alabama, burying her father, who had been killed in a railroad accident, when she learned her husband had been killed in the crash.3 The couple had married in October 1925 and had a daughter, Yvonne, who was 2 years old.4

The date of death was March 23. Denny Williams was just 32 years old. He was a Portland native, born there as Evon Daniel Williams on December 13, 1896, to Evon Williams, a glazier and Ohio native, and his wife, Margaret (Burke) Williams, a Missourian who was not listed in the 1900 census.5 Evon Williams had seven children aged 12 to 1 at the time (Denny was the sixth of the seven) but fortunately he was able to retain a housekeeper, Rose Caruthers.

Denny was somewhat diminutive by 21st-century standards, listed at 5-feet-8 and 150 pounds (at most) at the time he played ball. He batted left-handed and threw right-handed. He had been able to get a good education and attended college at Oregon State University’s Portland campus. And he spent a year in the US Army.

Williams’s parents had moved to Portland from Chicago in 1889. Denny went to Holladay Grammar School and starred at baseball and basketball for Jefferson High School. He started at Oregon State, but was called to the Army (where he was stationed at Fort Lewis and continued to play for “soldier teams” in both sports). He had some speed on the basepaths, once stealing seven bases during a 1916 semipro game.

Williams’s first foray into baseball was in 1919 in the Southern Idaho League. He played for a team in Paul, Idaho, a city in Minidoka County which had only been founded in 1907. His first year in the pros was the next year, 1920, in Saskatchewan with the Moose Jaw Millers in the Western Canada League. Incomplete data in SABR’s Minor League Database shows a 22-year-old Williams hitting .375 in 64 at-bats. The questionnaire Williams completed for Boston sports journalist C. Ford Sawyer cited Paul and Moose Jaw and said he played in 1921 for Cincinnati and for Joplin in the Western League.

Indeed, Moose Jaw sold William’s contract to Cincinnati in the late summer and he made his major-league debut with the Reds on April 15, 1921.6 He appeared in a lot of pinch roles for the Reds, three pinch-hitting roles without a hit, then four pinch-running assignments, and lastly three more pinch-hitting roles. Williams accumulated seven at-bats without a hit and without reaching base. In one game he played in left field after coming in as a pinch-runner. He was an outfielder throughout his career. He got caught stealing once, and never scored in any of the games. Williams’s last game for the Reds came on June 1. He had a lot more success the next time he reached the big leagues, in 1924.

The June 6 Cincinnati Post noted Williams’s release to Joplin. For the rest of 1921, the Joplin Miners show him playing in 56 games and batting .340. He had played semipro basketball in Portland over the winter of 1920/21– perhaps quite an achievement, given his 5-foot-8 height. In 1921 he had made Pat Moran‘s Reds out of spring training in Cisco, Texas, but had obviously struggled in his six weeks or so in major-league ball.

On February 5, 1922, Williams signed with the Mobile Bears (Southern Association). He played two full years with Mobile. Bert Niehoff‘s Bears won the pennant in 1922. Williams’s 10th-innng home run won the September 24 Dixie Series game against Fort Worth; Mobile went on to win the series. Williams hit a solid .298 during the regular season, with four homers and 238 total bases in 137 games, and then .328 with 256 total bases in 160 games in 1923. He led the league the latter year in both hits (212) and runs (129), but Mobile finished second, five games behind the New Orleans Pelicans.

Signed to a Boston Red Sox contract, Williams kind of picked up where he left off in the majors, with three more pinch appearances, this time scoring his first run in the pinch-running effort but failing to get a hit in either pinch-hitting assignment. The Red Sox returned him to Mobile on April 30, on option. In another 120 games with the Bears, Williams more or less duplicated his .328 average, hitting .327. He was recalled to Boston near the end of August, and this time came through for manager Lee Fohl – though it wasn’t until he got his first start that he got going. First he had three more pinch-hitting appearances, all fruitless.

Finally, on September 8 Williams got a start against the visiting New York Yankees and was 1-for-4, with a double. The next day he was 4-for-5, the second game in what became an eight-game hitting streak. At the end of the eight days Williams was hitting .385. By season’s end he’d gotten into 26 games, driven in four runs, scored 17, and hit for a .365 average. The Boston Globe noted that he “finished strong.”7

Much was expected from Williams in 1925, and he was named the starting left fielder for the Red Sox. He started reasonably well and was batting .270 at the end of May, but the Red Sox had a fairly strong outfield in Ike Boone, Roy Carlyle (who’d come by trade near the end of April), and Ira Flagstead, and consequently Williams played in only 11 games in June and one in July. He finished the 1925 season with the last-place Red Sox having played in 69 games, batting .229 (OBP. 285), driving in 13 and scoring 28.

In January 1926 the Red Sox sold Williams’s contract back to Mobile (in partial payment for Tony Welzer and Hal Wiltse). The Globe concluded that he “was a fair outfielder, but weak as a batsman.”8

Williams played another two seasons for the Bears, 155 and 157 games respectively. We do not have good batting statistics for those seasons. Mobile finished second both years. Overall, it was said Williams had hit .350 for Mobile over his four years with the team.9 That explains his ongoing attractiveness to the Red Sox, though he never realized his apparent potential in the majors.

The Red Sox purchased Williams’s contract again in September 1927 and brought him back in 1928 a couple of times. He opened with the team in April but his duty was limited to just four pinch-hit roles, producing one hit. He suffered an attack of appendicitis and had an appendectomy in late April. He accumulated 14 more at-bats and three more hits, his last day in the majors coming on July 18. He hit .222 (4-for-18) with one run scored and one run batted in. He stuck with the team, but was not utilized again and finally, on August 16, was released on option to the Baltimore Orioles.10

With Baltimore in the International League, Williams hit .315 in 39 games. In early December, the Red Sox sold his contract to the Portland Beavers.

Williams had always wanted to play for his hometown team, and he was excited about playing for Portland, getting ready for the 1929 season when, as we have seen, his life was cut short.

5 It’s unclear whether the correct spelling was “Evon” or the more standard “Evan.” Both appeared at one time or another in newspapers of his day, and in the census.