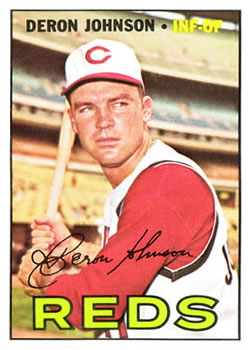 Deron Roger Johnson, labeled the “next Mickey Mantle,” spent 16 seasons as a major-league slugger. His finest year was not as a Bronx Bomber but as a Cincinnati Red. A dual football and baseball interscholastic sports star, the San Diego native excelled on the gridiron. Johnson played end, linebacker, kicker, and punter for San Diego High School. In 1955 he scored 15 touchdowns for the Cavers as the team captured the Southern California championship. His high-school football coach, Duane Maley, said Johnson was “the top player I have ever coached … the easiest kid to coach you’ve ever met. If he has a bad habit, it’s escaped me.” He was indeed, as the San Diego Union wrote, a “coach’s dream.”1 Johnson’s baseball coach, Les Cassie, said the All-American end was among the top athletes ever to come out of San Diego High School.

Pursued by several colleges, Johnson was offered numerous football scholarships, including one from Notre Dame, but Johnson turned down the Fighting Irish and the other schools. Upon graduation from high school in 1956, having been also sought by the Yankees, Braves, Red Sox, Indians, and Pirates, Johnson signed with New York Yankees scout Gordon “Deacon” Jones to a Class-D contract for $1,000 a month.

Johnson avoided being a Bonus Baby, who by the rules at the time was someone who signed a contract for more than $4,000 and had to be kept on the major-league roster for two years. Brent P. Kelley in his book They Too Wore Pinstripes showed that New York skipper Casey Stengel simply did not play 1954’s Frank Leja or 1955 signee Tommy Carroll. So by mid-1956 the Yankees front office opted out of the Bonus Baby game. Kelley wrote that Johnson had decided he would rather be in the minor leagues playing every day. The Kearney club of the Class-D Nebraska State League played only 63 games over two months. Thus, the net deal “was essentially the major-league minimum ($6,000 a year)”2 and with a good season Johnson could be given a raise. Johnson figured correctly.

At Kearney the 17-year-old outfielder led the league in total bases (167), runs scored (70), RBIs (78), and home runs (24). He was named to the circuit’s all-star team. He also tied for the league lead in double plays by outfielders with four. The next year, the young phenom was promoted to Class-A Binghamton. Again he made the all-star team, and led the Eastern League with 279 total bases, 103 runs scored, and 26 home runs. In 1958, Johnson moved up to Triple-A Richmond (International League), where he clubbed 27 doubles, 5 triples, and 27 homers, and was selected as an IL all-star. In addition to the outfield, the Californian was called upon to handle third base. The year also brought the first of military duties that would occasionally interrupt his ballplaying career. In 1958 and 1959 Johnson served in the US Army for six months under the Reserve Training Program. On the field, his 1959 and 1960 seasons were spent with Richmond (25 and 27 HRs respectively).

Called up to the Yankees in September 1960, Johnson made his major-league debut on the 20th. The 22-year-old pinch-hit in the ninth inning of a 1-1 tie game between New York and Washington with Bill Skowron on second base. Facing Senators southpaw Hal Woodeshick, Johnson advanced Skowron to third with a fly to center. The Yankees won, 2-1, in the 11th.

Overall, Johnson donned the pinstripes for 19 games in 1960 and ’61. The Big Apple sports media had tagged him as a replacement for Mickey Mantle. But that never came about. On June 14, 1961, Johnson joined numerous other would-be Bombers in being sucked into the NY-KC trade pipeline. The Athletics got Johnson and right-handed pitcher Art Ditmar for lefty Bud Daley.

At Kansas City in 1961, Johnson batted .216. In October he was recalled to active Army duty and served until August 1962. The remainder of the 1962 season he batted a paltry .105. That October he wed Lucille DeMaria. They had three children, two sons, Deron Jr. and Dominick, and a daughter, Dena. In April 1963 Kansas City sold Johnson to the Cincinnati Reds, who assigned him to their San Diego Padres team in the Pacific Coast League.

At San Diego, 1963 was a honeymoon of a year. Johnson returned to his native California and was golden. He topped the Pacific Coast League with 33 home runs, tied for fifth with 91 RBIs, and was picked as the first baseman on the PCL all-star team. His performance pushed him onto the Reds’ 1964 roster, where he remained for four seasons. Johnson later said of his full major-league season, 1964, “That was my first year. That was a hell of a pennant race. There was five teams right there: us, the Cardinals, the Phillies, the Braves, and the Giants. There was so many damned teams there, if you won one day you’d go from fourth to first. It was really fun. Once we were tied for first. Every day you go you know it means something.”3 Cincinnati did not capture the NL flag. In 477 at-bats, as their starting first baseman, Johnson hit .273, with 24 doubles, 4 triples, 21 home runs, and 79 RBIs.

Johnson was moved to third base and had a banner year in 1965. He led the league with 130 RBIs, despite typically batting fifth or sixth in the order. He shared top rank in sacrifice flies with 10 and batted a career high .287 with 30 doubles, 7 triples, and 32 home runs. Johnson made The Sporting News and Associated Press all-star teams as a third baseman, and came in fourth for the NL MVP award. Johnson told Brent Kelley, “I had a good year. I was on a good ballclub. We had some good hitters. We had Pete Rose and Vada Pinson. I had Frank Robinson hitting in front of me. I had a hell of a year, really.”4

After a .257 season in 1966, Johnson fell to .224 in 1967 with 13 home runs, 53 RBIs, and 104 strikeouts. After the season the Reds dealt him on October 10 to the Atlanta Braves for outfielder Mack Jones, pitcher Jay Ritchie, and first baseman Jim Beauchamp. Johnson hit .208 with Atlanta in 127 games and lasted just a season. On December 3, 1968, the Braves sold him to the Philadelphia Phillies in a cash deal.

The move to Philadelphia revived the slugger in Johnson. From 1969 to 1973, he clubbed 88 homers, had 304 RBIs, and hit 82 doubles despite playing in only 12 games in 1973 before being traded to Oakland. His most productive year was 1971; Johnson batted .265, garnered 95 RBIs, and hit 34 home runs. He homered 22 times at home, breaking Del Ennis’s 1950 Philadelphia record. Further proof of Johnson’s long-ball skill was evident on July 10 and 11, 1971, as he belted four consecutive home runs against the Montreal Expos, three of them coming on the 11th.

On May 2, 1973, after nearly a decade of playing in the National League, Johnson found himself back in the American League, as the Phils traded him to the Oakland A’s for minor-league third baseman-outfielder Jack Bastable. Johnson clocked 19 homers and had 81 RBIs, for Charlie Finley’s Athletics. The switch got him a World Series ring as the A’s bested the New York Mets in the ’73 fall classic. Johnson entered baseball history as the first player to hit 20 home runs in a season divided between both leagues.

Johnson was 1-for-10 as the A’s DH in the ALCS against the Orioles. He pinch hit in the first five games of the Series, collecting a double in Game Two and a single in Game Four, and played first base in Games Six and Seven, adding another single.

Sportscaster Curt Gowdy called Game Two one of the “longest and one of the weirdest games in World Series history as blinding sunshine turned every fly ball into an adventure.”5 Johnson’s extra-base hit provided a prime example.

In the top of ninth inning, the Mets called upon 42-year-old Willie Mays to pinch run for Rusty Staub. New York kept him in the game at center field. In the bottom of the ninth, Johnson batted for the starter, Blue Moon Odom. Johnson socked a fly ball to center which Mays lost in the sun and then fell down while chasing after the ball. Although the A’s had a 6-4 lead after seven innings, they lost the second game, 10-7.

Johnson was on the A’s disabled list for 15 days in April 1974. On June 24 he was released on waivers to the Milwaukee Brewers. (The Brewers later assigned hurler Bill Parsons to complete the transaction.) On September 7, 1974, the Brewers sold Johnson to the Boston Red Sox for the stretch drive. He hit .120 with two RBIs. The Red Sox released him after the season.

On April 5, 1975, as a free agent, the 36-year-old veteran signed with the White Sox. Chicago GM Roland Hemond said the Red Sox did not need Johnson because Tony Conigliaro had a successful spring comeback and they did not want to stand in the way of Johnson.

In 148 games for the White Sox in 1975, Johnson hit a team-leading 18 home runs and drove in 72 runs. On September 21, after Jim Rice had been hit by a pitch that broke his left hand, the Red Sox acquired Johnson from Chicago for cash and a player to be named later (catcher Chuck Erickson). Johnson’s Red Sox role was to play first base and serve as designated hitter. He was 6-for-10 in the three games in which he appeared. The Red Sox went to the World Series but Johnson had joined the team too late to be eligible for the Series roster. He played sparingly in 1976 and was released on June 4, after which he retired as a player.

A Poway, California, resident, Johnson owned a construction company in nearby San Diego and operated a 40-acre cattle ranch. Nevertheless he still maintained his contact with baseball. In 1978 he returned to the Pacific Coast League and piloted Salt Lake City to a 72-65 second-place finish. The club lost in the playoff semifinals to Albuquerque.

In June 1991 Johnson was diagnosed with lung cancer. After a long fight with the illness, he succumbed on April 23, 1992. He was survived by his wife Lucy Ann, his sons Deron Jr. and Dominick, and a daughter, Dena. He is buried at Dearborn Memorial Park, Poway, California. Over his 28-year baseball life, he told Hall of Fame researchers, his greatest thrills were having played in the 1973 World Series for the Athletics and hitting four home runs in a row for the Phillies in 1971.