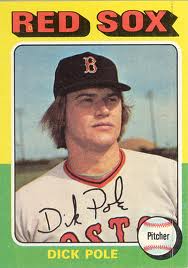 Dick Pole was a 6-foot-3, 200-pound right-handed pitcher who broke in with the Red Sox in 1973.  Born on October 13, 1950, in Trout Creek in Michigan’s Upper Peninsula, one of the few Yoopers who worked a major-league mound. Richard Henry Pole was signed as a free agent by the Boston Red Sox in 1969.  He worked his way up through the minors fairly steadily, and when Ray Culp (2-6 at the time) experienced prolonged numbness in his hand, Culp was put on the disabled list and Pole was summoned to take his place. Pole debuted on August 3, 1973, wearing number 45.

After signing with the Red Sox in 1969, Pole was sent to Greenville in the Western Carolinas League, posting a 13-10 record with a 3.18 ERA, leading the league with three shutouts and 25 games started. At season’s end he appeared in two games for Winter Haven in the Florida State League, losing both despite giving up just two earned runs. He started with Winter Haven in 1970, moving on near the end of the season to Winston-Salem. In 1971 he spent the year with Pawtucket, then a Double-A affiliate (8-7, 2.76 ERA). The following year, he made Triple-A with Louisville. When the Red Sox established their Triple-A team in Pawtucket, Pole returned for the 1973 season, going 12-9 and throwing a seven-inning, 2-0 no-hitter against Peninsula on June 23. For players with more than 80 innings, he led the International League with a 2.03 ERA and earned himself the call-up to the big-league club.1

Pole’s first major-league appearance was as the starting pitcher against the Orioles on the night of August 3 at Memorial Stadium. It wasn’t the best debut, as debuts go. He lasted only 3⅔ innings, giving up six earned runs on 10 hits, and taking the loss. He’d gotten his feet wet, though.  His second start wasn’t much better – 3⅓ innings with four earned runs, but this game was decided in extra innings.  Starting at home on August 12, Pole pitched 5⅔ innings and got his first win in a major-league uniform as Boston beat the California Angels, 14-8. He started some and relieved some, playing out the rest of the season with the Red Sox and compiling a 3-2 record, with an earned-run average of 5.60.  Before being called up, he had pitched well enough for Pawtucket to be named 1973’s Most Valuable Pitcher in the International League.

The following year, 1974, Pole was called up from Pawtucket in late June when Rick Wise was put on the disabled list. He filled in for a few weeks (June 22 through July 13), then went back to the minors until he was called up again at the start of September.  His most impressive stint came on September 8 when the Red Sox’ Juan Marichal could get only one out in the first inning, tagged for four earned runs.  Pole pitched for seven full innings, allowing just two more runs and keeping the Red Sox in the game against the Milwaukee Brewers. The Red Sox came from behind and won the game, 8-6, and Dick got the win.  The win edged Boston into a tie for first place with the Orioles.  In all, Pole put in 45 innings of work, mostly in relief, with a 1-1 record, and an improved 4.20 ERA.

Pole saw work in bunches in 1975, up at the start of the season, but out for virtually the month of May. He got in seven games in June, and the last was a June 30 game, a night game at Fenway Park against the Orioles, the first game of a twi-night doubleheader.  Pole was pitching a brilliant game, shutting out the O’s through eight innings on four hits.  Going for the complete-game shutout, Pole opened the ninth inning with a strikeout of Don Baylor.  Then the Birds started hitting.  Pinch-hitter Jim Northrup singled, and so did Brooks Robinson and another pinch-hitter, Ken Singleton.  That loaded the bases. There were still no runs scored.  Next up was Tony Muser (once a Red Sox farmhand) and he changed Dick Pole’s life forever, driving a ball hard and right up the middle – a line drive right off Pole’s face.  It hit so hard that it ricocheted off his face and soared over Rico Petrocelli at third base. Two runs scored and Muser was credited with a double. But Dick Pole lay crumpled on the ground. His cheekbone was broken and his retina damaged as well. The final score was 5-2. Pole earned the win. But the effects of the injury may have permanently affected him. Garry Brown of the Springfield (Massachusetts) Union later wrote, “He recovered to pitch again, but was never quite the same.”2

Pole’s only appearance in postseason play came in Game Five of the 1975 World Series. Both the Reds and the Red Sox had two wins. After seven innings at Cincinnati’s Riverfront Stadium, the Reds held a 5-1 lead, all charged to Red Sox starter Reggie Cleveland. Jim Willoughby threw two scoreless innings and Sox manager Darrell Johnson sent Pole in to pitch the eighth. He faced two batters – Johnny Bench and Tony Perez – and walked both. Johnson came out with the hook and brought in Diego Segui. On back-to-back fly balls, Bench took third and then scored. Pole’s postseason ERA is thus infinity; he is charged with one earned run in zero innings pitched.  It could have been worse: Perez had already homered twice earlier in the game.

In 1976 Pole got more regular work, appearing in 31 games, starting 15 of them.  He threw one complete game, on June 17 in Oakland. It was his first start after being bombed for six runs in the first inning six days earlier in Minneapolis. He got an 8-3 win, up against A’s starter Mike Torrez at the Oakland-Alameda County Coliseum. He also got his one and only major-league at-bat. After seven full innings, the Red Sox had an 8-2 lead. First baseman Carl Yastrzemski was taken out of the game to give him a little rest, and Cecil Cooper took over at first base.  Cooper had been the DH. With the move, the Sox lost the DH and Pole was put in Yaz’s spot in the lineup. His one time in the batting order and he was batting cleanup in place of Carl Yastrzemski!  Come the top of the ninth, and Dick led off. He put wood on the ball, grounding back to pitcher Stan Bahnsen, who threw him out at first. 0-for-1 lifetime.

One of his better performances in 1976 came on May 22, facing the Yankees at the Stadium. Pole started the game and pitched 8⅓ shutout innings, holding New York to just four hits. He was tiring, and Tom House came on in relief, with House finally losing 1-0 in the bottom of the 11th. Pole’s year-end ERA was a respectable enough 4.33.

After the 1976 season, it was expansion time with both the Toronto Blue Jays and Seattle Mariners entering the American League. Though he’d skippered the Red Sox to a pennant and into the seven-game World Series in 1975, manager Darrell Johnson hadn’t lasted much more than half the ’76 season. On July 19 Johnson was fired and replaced by Don Zimmer. But Johnson was hired as the first manager of the Mariners and when it came time for Seattle to pick in the November 5 expansion draft, Pole was one of the players not protected by the Red Sox. He was selected by Seattle as its seventh pick overall.

Pole began the 1977 season on the disabled list. His first appearance came in Boston on May 4, when he was brought in to relieve Stan Thomas with Boston holding a 4-1 lead. Pole walked the first batter he faced, former batterymate Carlton Fisk. Dwight Evans bunted Fisk to second, and Fisk advanced to third on a wild pitch. Bernie Carbo walked and then Butch Hobson singled Fisk home. Pole got the next two batters, though, and the game was soon over, Seattle scoring just once in the top of the ninth.

Pole was a regular in the Mariners’ rotation, starting 24 games. He ended the season with a 7-12 mark. (The team was 64-98, but the Mariners were spared from being in the cellar since Oakland was 63-98.) Pole’s ERA was 5.15, but better than the 6.48 ERA (with a 4-11 record) he posted in his final year with Seattle (and in major-league ball) in 1978. After the July 18, 1978, game, Pole never pitched in the majors again. He finished out the season with Seattle’s Triple-A affiliate, the San Jose Missions, but was 0-4 in the Pacific Coast League. He tried to make it back to the majors the following spring but was released by the Mariners on March 24, 1979.

Pole pitched for Santo Domingo and the Pacific Coast League Portland Beavers in 1979, for Portland and the Southern League’s Montgomery Rebels in 1980, and in seven games for Birmingham in 1981. He pitched for a few seasons in the Mexican League before calling it quits as a player and getting into coaching.  He spent five years in the Cubs system, working at Quad City, Pittsfield, and Iowa. Pole’s first job as a major-league coach came under Don Zimmer, manager of the Chicago Cubs. When Zimmer was hired to manage the Cubs for the 1988 season, he hired Pole as his pitching coach.

Pole was indeed thinking more. He said the years in Mexico had helped him in this regard, when he had begun to follow up on something Luis Tiant had told him in Boston. In 1999 Pole told the Los Angeles Times, “Luis Tiant always said I should throw changeups, but I was young and hardheaded and relied too much on my fastball. It didn’t help then, but it helped me in my coaching life.”3  Pole’s more patient philosophy helped turn guide the career of one of the Cubs’ young pitchers, Greg Maddux. Just starting his second full year of play, Maddux came to training camp with an 8-18 record in 1987 and an ERA of over 5.50. With Pole as his pitching coach in 1988, Maddux posted a 3.18 ERA and won 18 games (18-8), and he credited Pole, who, he said, “taught me how to throw pitches.”4  In July 2005, after recording his 3,000th career K, Maddux told Rick Gano of the Associated Press: “I remember when Dick Pole told me one day, ‘Why don’t you stop trying to strike guys out? Just try to get them out, and you’ll probably strike out as many guys, if not more. He was right. I’ve always tried with two strikes just to make a pitch and get the guy out. You get a lot of strikeouts just on accident.”5

When Dusty Baker was hired to manage the San Francisco Giants for the 1993 season, Pole joined Baker, serving five more seasons as a pitching coach (1993-97). The two had gotten to know each other while working in the Arizona Fall League, and when Baker hired Pole, he was quoted as saying, “I’d always wanted a left-handed pitching coach. The more I was around him, the more I saw he thought like a left-hander, though he’s a righty. Left-handers usually throw less heat, there, they have to know how to pitch more, which is what it’s all about. …”

In 1998 Pole put on a Red Sox uniform for another year, serving as the bullpen coach. He was the pitching coach for the Angels in 1999. When Indians pitching coach Phil Regan resigned after the Indians were pummeled for 44 runs in the final three games of the 1999 AL Division Series, Pole was hired by Cleveland for the 2000 season and served in that capacity in 2000 and 2001. In 2002 he was the pitching coach for the Montreal Expos. His nephew Hank Pole was in the Expos system that one year, with a 1-1 record in Rookie ball for the Gulf Coast League Expos.

The Cubs hired Dick Pole for 2003 and he served as bench coach for manager Dusty Baker for four years, through 2006. From 2007-09, he was the major-league pitching coach for the Cincinnati Reds.

4 See the New Orleans Times-Picayune of June 17, 1988, for appreciative Maddux comments about Pole.