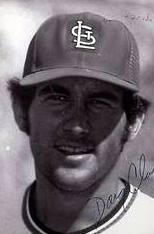 In many ways Doug Clarey was an accidental major leaguer, someone who got there largely because of the convergence of a number of circumstances that allowed him to make the leap all the way from Class A ball to the big leagues for a few weeks in 1976. In those weeks, however, he managed to experience a moment that was the stuff of quintessential American dreams – hitting a game-winning home run in extra innings, in a ballpark near his boyhood home – before he slipped back into the minor leagues and then out of baseball not long after.

Douglas William Clarey was born on April 20, 1954, in Los Angeles.i His father, Elmer W. Clarey, was a dispatcher for United Airlines for 35 years.ii His mother, Maxine Clarey, was a homemaker. Clarey had one sister, Sandra (Clarey) Larson. (Clarey’s father died in 1995; his mother died in 2006.)

Even as a toddler, Clarey loved baseball. His father built him a backstop in the yard when he was only 2½ years old and Clarey said he spent every day throwing against it. The work helped him develop a strong arm and so by the time he was in Little League ball, he was playing the positions that could exploit that attribute: pitching, shortstop, center field.

When Clarey was 12, the family moved north, to Los Altos, California, south of San Francisco, in what is now known as the Silicon Valley. He attended Homestead High School. (One of his classmates was Apple co-founder Steven Jobs.) There, Clarey, who became a Giants fan after the move, played baseball all four years, his first year on the freshman team and the other three as a member of the varsity.

His coach there, Jim Hemphill, who in 2012 was a scout for the Atlanta Braves, remembered Clarey as one of the best athletes he encountered in his years as a coach at Homestead.iii Clarey helped the school win league championships in his sophomore and senior years, and set school records for the highest season batting average, .448, in his senior year, as well as the most home runs (7). He was selected first-team all league his junior year, and in his senior year was the league’s most valuable player. That year, he was also chosen to the Northern California All-Star team for the annual California high school All-Star game.

Days after his graduation in 1972, the Minnesota Twins chose Clarey in the sixth round of the amateur draft in June, ahead of future All-Stars Jim Sundberg, Willie Randolph, and Rick Honeycutt, among others.iv The Twins rated him “a good looking hitter with good running speed and decent power [with] the potential to be an above average major league hitter.“v

It was potential that Clarey, for whatever reason, would struggle to realize.

The Twins assigned Clarey to their rookie league team in Melbourne, Florida, in the four-team Florida East Coast League There, appearing at shortstop in 49 of the team’s 57 games, he struggled as a hitter – a condition that would follow him through nearly his entire professional career, finishing with a batting average of .222, one home run and an OPS (on-base average plus slugging average) of .578. In the field he showed decent range but made 24 errors, and his .900 fielding average was lowest among the league’s regular shortstops.

For the next year the Twins organization converted Carey to a second baseman, assigning him to Geneva in the short-season Class A New York Penn League. There, he still did not hit as they expected (.237 with five home runs), but he continued to improve as a fielder, leading the league in assists. The next season his fielding was good enough that, playing for Wisconsin Rapids in the Class A Midwest League, he made the All Star team, despite batting .232 with nine home runs. That year he led the league’s second basemen in assists, double plays, and fielding average.

That ability was enough to convince the St. Louis Cardinals to select Clarey in the December 1974 Rule 5 draft, and for the 1975 season they assigned him to Arkansas of the Double-A Texas League.vi He continued to play solid defense – leading the league in assists and double plays at second base – but he suffered the worst year of his professional career at the plate, finishing at .206, the lowest average in the league among all hitters with at least 200 plate appearances.

The season earned Clarey a demotion for 1976, back to Single-A, at St. Petersburg in the Florida State League. Not surprisingly, he was disappointed.

“I had a rough spring training,” Clarey told the writer. “I thought I had clinched a spot on the Triple-A roster but then the Cards sent down two infielders (Luis Alvarado and Mario Guerrero) so I went to Double-A, but they had a couple of prospects like Ken Oberkfell, so I ended up at Single-A.”

Even worse, Clarey was not the starting second baseman at St. Petersburg. He told a sportswriter that year, “The reasons they gave me just didn’t seem too clear. They told me I would be very important to the organization as a swing man, but that was hard for me to take after having played every day.”vii

Clarey’s fortunes turned fairly quickly that season, however. In the second game of the year, Cardinals’ starting second baseman Mike Tyson injured his leg turning the pivot on a double play when the Chicago Cubs’ Bill Madlock hit him hard trying to break up the play.viii

The Cardinals initially listed Tyson as “day-to-day” but a week later, on April 17, put him on the 15-day disabled list. The team would have preferred to call up either Alvarado or Guerrero from Triple-A Tulsa but both were out of options and would have to clear waivers before they could join the team. Because the Cardinals put Tyson on the disabled list on a Friday, they would have had to wait almost a week before either could join the team. As St. Louis Post-Dispatch sportswriter Dick Kaegel put it, “The club needed a body fast.”ix

That body was Clarey and the team recalled him.

“I was surprised,” Clarey told the writer. “I didn’t expect it. No one sat down with me and told me what my responsibilities would be, but realistically I knew I was there to fill a spot on the roster. I would be a defensive replacement more than anything.”

Clarey’s first appearance in a major-league game was as a pinch-hitter for pitcher Mike Wallace in the sixth inning of a blowout loss to the New York Mets on April 20.x He was struck out by Jon Matlack. “He made me look bad,” Clarey told the writer. “I hardly even saw the ball when he was throwing it.”

Four days later Clarey entered the game as a pinch-runner in the top of the ninth inning of a 4-3 loss to San Diego and then stayed in the game at second base for the bottom of the inning, recording one putout, on a sacrifice bunt that pushed the eventual winning run into scoring position.

Four days after that, on April 28, against the Giants in Candlestick Park, with his parents and several of his high-school friends in attendance, Clarey had yet another chance, in the 16th inning of a 2-2 game. With two outs, Don Kessinger on first, and pitcher Mike Proly due up, Clarey was the only position player remaining on the bench who hadn’t already gotten into the game.xi

Clarey, who batted and threw right-handed, went to a one-ball, one-strike count, and then Giants hurler Mike Caldwell threw a pitch that his manager, Bill Rigney, later said came too far inside.xii Clarey drove it down the left-field line, barely over the eight-foot-high fence, for his first and, as it would turn out, only major-league hit: a two-run home run that gave the Cardinals a 4-2 lead they would hold onto.xiii

After the game Clarey told a sportswriter, “It’s something you always dream about, ever since I was a little boy watching Giants games and just wishing I could be one of them. This is the greatest experience of my life.”xiv

One sportswriter called him a “Cinderella man.”xv Another writer said that Clarey’s home run was “what’s great about baseball” and reported that when Clarey came into the clubhouse after the game, “the place broke out in pandemonium.”xvi

Clarey got into another game in extra innings about a week later, this time as a defensive replacement at second base in the tenth inning against the Braves in Atlanta on May 4. He collected an assist and came to bat in the 12th and grounded out to the pitcher. Three days later, with the Cardinals back at home for the first time since Clarey’s home run, the team presented him with a watch in a pregame ceremony commemorating the hit.xvii Then on May 10 St. Louis sent him back to St. Petersburg.xviii There, he had three hits in eight at-bats before the organization promoted him to Triple-A Tulsa, where he remained for the balance of the season, save for one more brief stint with the Cardinals in late July and early August when Tyson went on the DL again. During that stay, Clarey appeared in five games and had one at-bat, again in extra innings, this time in the tenth against the Cubs in Chicago, when he fouled out to the first baseman.

At Tulsa he continued the struggles at the plate that had marked his career as a hitter in the minor leagues, finishing the season batting .228, with seven home runs, as he split his time among second base, shortstop, and third base.

The next spring the Cardinals traded Clarey to the New York Mets for outfielder Benny Ayala. The Mets in turn assigned him to Triple A Tidewater in the International League, where Clarey hit only .125 with three home runs in 28 games before the Mets traded him to the Milwaukee Brewers, who assigned him to their Double-A Eastern League team at Holyoke. There he had, statistically, his most success in the minor leagues, hitting .268.

The Brewers traded Clarey to the Baltimore Orioles at the end of that season, and for 1978 Clarey ended up with Charlotte of the Southern League. While his average was not high (.228) with Charlotte, he flashed power early on and was leading the league with 12 home runs at the end of May before falling into a dry period in which he did not hit a single home run in June and July.xix He finished the year with 19 HRs, fourth best in the league.

After the season the Orioles offered Clarey another contract to play at Double-A, telling him they thought he had a future in coaching, but Clarey decided it was time to walk away from the game. “It was time for me to go,” he told the writer. “All of the polish and luster that baseball used to have for me wasn’t there anymore; it didn’t mean the same thing to me and so I decided it was time to retire.”

Clarey, who had married the former Marie Klarmann in 1977, settled in Los Angeles and earned a California real-estate license. He sold commercial real estate until 1993, when he left that and opened a gourmet pizza restaurant, Cheech’s Pizza, located less than three miles from Dodger Stadium. He had two children, a son and a daughter.

i Doug Clarey questionnaire on file in the archives of the National Baseball Hall of Fame.

ii Unless otherwise noted, all of the personal information about Clarey’s life came from two interviews between the writer and Clarey: one in July 1986, for an article about him that appeared in the July 6, 1988, issue of the Riverfront Times (St. Louis) and the second on January 6, 2012, for this biographical essay

x Unless otherwise noted, accounts of Clarey’s major-league appearances are from Retrosheet, www.retrosheet.org.