This article was written by Mike Lackey 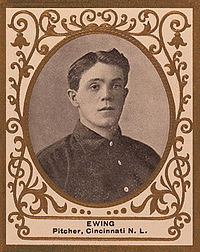 In his prime, Long Bob Ewing-the "Long" referring to his 6'1", 170-pound frame-was the workhorse of the Cincinnati Reds' staff, becoming their winningest pitcher of the Deadball Era and the most significant spitball pitcher in the history of the franchise. Toiling for six managers in eight years on a succession of teams that never finished within 15 games of first place, Ewing led the Reds in complete games twice, victories and strikeouts three times each. He has the second highest career E.R.A. (1,000 or more innings) in franchise history, trailing only Noodles Hahn. Though he never led the National League in a major statistical category, Ewing did finish second in innings pitched, complete games and strikeouts in 1907.

Born on April 24, 1873, George Lemuel Ewing-"Bob" was likely a name he adopted in preference to George-grew up on a farm in Auglaize County, Ohio. According to family lore, he started out as a boy pitching potatoes against a target on the barn. Despite his early fascination with the game, Bob got a relatively late start in the professional ranks, turning 24 before signing his first contract. Through the mid-1890s he pitched for his hometown Wapakoneta Indians against teams from other small towns in western Ohio. Usually the only money to be made was on side bets, but the competition was surprisingly brisk. In 1897 the loose network of local rivalries coalesced into the short-lived Northwestern Ohio League. Of all the players in the four-team circuit, nearly one in five eventually reached the majors: Wapakoneta had Ewing and George Rohe; St. Mary's boasted Jack Harper and Topsy Hartsel; Piqua featured Nick Altrock; and Lima was led by Jim Delahanty and Roger Bresnahan.

In August 1897 Ewing signed with the Toledo Mud Hens, who were on their way to the Interstate League pennant. He made his professional debut with a 9-4 victory over Springfield. The Toledo Commercial reported that in spite of indifferent support, the newcomer remained "as cool as the January weather in Alaska." Over the next three seasons, Ewing pitched nearly 900 innings and won more than 20 games annually for Toledo. Promoted to Kansas City in 1901, he went 21-5 and led the Western League in winning percentage. With Ewing, Jake Weimer and Bill Wolfe combining for 64 victories, the Blues won the pennant by 10 games.

The turning point of Bob Ewing's career came October 10, 1901. Home from Kansas City, he hooked up with a local club in Sidney, Ohio, for a couple of post-season series against other town teams. When the Cincinnati Reds came to Sidney on a barnstorming tour, Ewing drew the pitching assignment; when the game was called for darkness after eight innings, he had held the big leaguers to a 3-3 tie. Within two weeks he was under contract to the Reds.

Ewing survived a particularly inauspicious beginning. In his first major league game on April 19, 1902-five days before his 29th birthday-he walked ten batters, seven of them in one inning, in a 9-5 loss to Chicago. It was nearly a month before he gained his first victory; then he missed the second half of the season with a sore arm. Bob had to fight for a place on the roster the next two seasons before establishing himself as one of the Reds' top pitchers. But by late 1904 Ewing had mastered the spitball, becoming one of the National League's first notable exponents of the wet one. With that new weapon he enjoyed his best year in 1905, securing his 20th victory in the last game of the season. A month later, he married Nelle Hunter, the daughter of a prominent Auglaize County physician.

In good times and bad, Ewing earned a reputation as a hard worker and a sober, conscientious professional. He was, in the approving words of a Cincinnati sportswriter, "the most tractable of ballplayers." Though he never enjoyed so much as a taste of a pennant race in Cincinnati, there were highlights:

o August 18, 1903: Ewing pitches a one-hit shutout in New York, allowing only an infield single by Jack Dunn in the eighth inning. Teammates argue that if the play had been scored correctly, Ewing would have been credited with a no-hitter.
o September 11, 1906: Ewing duels Deacon Phillippe and Vic Willis to a scoreless tie in Pittsburgh, scattering eight hits over fifteen innings.
o April 11, 1907: Ewing beats Pittsburgh 4-3 on opening day in Cincinnati as the Reds come from behind with two runs in the ninth inning. He is also the opening day starter in 1908, leaving without a decision as Cincinnati loses 6-5 to Chicago.

From 1907 Bob Ewing was the senior member of the Reds in time of service. He was also approaching an age when most pitchers of the era were used up. On January 20, 1910, the Reds traded him to Philadelphia in a two-for-two swap of pitchers-Ewing and Ad Brennan for Harry Coveleski and Frank Corridon. Observed Jack Ryder, the long-time baseball writer of the Cincinnati Enquirer: "Faithful followers of the Reds will be sorry to see Long Bob Ewing go, in spite of the fact that he has not been a big winner for a number of years. . . . Bob has been very unlucky in his work for some time, pitching a lot of close games in which he lost by small scores."

In Philadelphia he was initially an afterthought in manager Red Dooin's plans. But when other pitchers faltered, Ewing stepped up. The oldest regular starting pitcher in the league, he went 16-14 for a fourth-place team, leading the Phillies in complete games and pitching three games in which he allowed three hits or fewer. That, however, was Ewing's last hurrah. His arm gave out and Philadelphia dropped him in September 1911. Roger Bresnahan gave Ewing a brief look in St. Louis in 1912, then the aging spitballer returned to the minor leagues. He reached the end of the line in 1913, failing in a trial with Minneapolis and drawing his release two weeks after his 40th birthday without appearing in a single game.

Ewing returned home and made a few appearances with the Wapakoneta team before hanging up his glove. He lived comfortably after quitting baseball and pursued a variety of occupations, raising hogs and training harness horses, managing an assortment of businesses and serving two terms as sheriff of Auglaize County. Long Bob Ewing died of cancer on June 20, 1947, at age 74. Nelle, his wife of 42 years, survived him by a quarter-century, becoming something of a celebrity in Wapakoneta. She also remained an avid Reds fan, living to meet Pete Rose and Johnny Bench and to see the dawn of the Big Red Machine dynasty of the 1970s. She attended more than 60 consecutive opening day games before her own death in 1972 at age 91.

Bob and Nelle Ewing are buried in Walnut Hill Cemetery near New Hampshire, Ohio, under a common headstone decorated with a baseball and bat. On August 12, 2001, all eight of Ewing's surviving grandchildren were present at Cinergy Field for his induction into the Cincinnati Reds Hall of Fame.

The material for this article was drawn mainly from various local and national newspapers: The Sporting News and Sporting Life; three or four Cincinnati papers, primarily the Enquirer and the Commercial Tribune; and others, notably The Lima News and Lima Times-Democrat; the Wapakoneta Daily News; the Toledo Blade and Toledo Bee; the Sidney (Ohio) Daily News; and the Minneapolis Tribune. I also conducted interviews with family friends and Ewing's grandchildren, and reviewed his file at the National Baseball Hall of Fame.