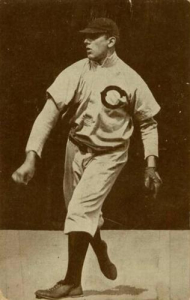 According to J.C. Kofoed of Baseball Magazine, Big Ed Reulbach was “one of the greatest pitchers that the National League ever produced, and one of the finest, clean-cut gentlemen who ever wore a big league uniform.” A statuesque 6’1″, 190 lb. right-hander, Reulbach employed the technique of “shadowing”—hiding the ball in his windupas well as a high leg kick like that of Juan Marichal (according to Chief Meyers in a 1967 interview) and what was generally regarded as the finest curve ball in either league to become one baseball’s most difficult pitchers to hit. He hurled two one-hitters, six two-hitters, and 13 three-hitters, and in 1906 he yielded 5.33 hits per nine innings, still the third-lowest ratio of all time. Reulbach also gave up fewer hits than innings pitched in each of his 13 seasons, a feat that was never accomplished by any pitcher in the Hall of Fame (Christy Mathewson and Cy Young also did it 13 times, but they pitched 17 and 22 seasons, respectively), and on September 26, 1908, he became the only pitcher ever to throw a doubleheader shutout.

Despite statistics that compare with those of Sandy Koufax, who also pitched in a pitching-oriented era, Reulbach never received a single vote for the Hall of Fame. Perhaps one of the factors that prevented him from receiving more consideration was his occasional lack of control. In 1920 Reulbach revealed to Hugh Fullerton a secret that he’d been keeping for two decades: he had a weak left eye, which not only interfered with his ability to field balls hit to his left, but also sometimes made him wild. “There were times when the weak eye was worse than usual, especially on hot, gray days, or when the dust was blowing from the field,” Ed recalled. “Lots of times the sweat and heat would affect the good eye and I’d have to figure out where the plate was.” Reulbach said that his teammates never suspected the problem; he didn’t even inform his own catchers so they could give him a special target. Once Jimmy Sheckard caught him wearing glasses while reading, but Sheck “was a good old scout and kept quiet about it.”

Edward Marvin Reulbach was born in Detroit on December 1, 1882. Eighteen-year-old Ed was already a veteran of one minor-league season with Sedalia of the Missouri Valley League (where he reportedly played under the pseudonym of “Lawson”) when he enrolled at the University of Notre Dame in the fall of 1901. Reulbach played interhall football and basketball and was one of the varsity’s top hitters in a pre-season exhibition series against the reigning American League champion Chicago White Sox, but the Faculty declared him ineligible for the 1902 college seasonnot because he was a professional but because he was a freshman. Returning to pitch for Sedalia for each of the next two summers, Ed became Notre Dame’s star outfielder and pitcher, breaking the college’s single-season record for strikeouts in 1904 and never yielding more than six hits in a game that season. In June his teammates elected him Captain for 1905, a popular selection according to The Scholastic, the Notre Dame student magazine.

But fate had something else in store for Ed Reulbach in 1905. While pitching under the alias of “Sheldon” for the Montpelier-Barre Hyphens of Vermont’s outlaw Northern League, he met and fell in love with his future bride, Mary Ellen “Nellie” Whelan of Montpelier. To be closer to Nellie, Ed decided to forego his senior year at Notre Dame and enroll in medical school at the University of Vermont. In the spring he became the star of the UVM baseball team, batting cleanup and playing left field when he wasn’t pitching. Newspapers called Reulbach the “greatest of all college pitchers,” and on May 12, after winning his fourth start, 1-0, against Syracuse, he received an offer from the Chicago Cubs that “would take the breath away from an average person,” according to the Burlington Free Press. That night, accompanied by a large group of students, Ed caught the train to New York.

Four days later he made his major-league debut at the Polo Grounds against the reigning NL-champion New York Giants, tossing a complete game and giving up only five hits in a 4-0 loss. Nine days after that he earned his first victory, entering in the second inning and yielding five hits and no runs the rest of the way as the Cubs rallied to beat the Phillies, 9-4. Perhaps Ed’s most impressive performance came against the Phillies on August 24, when he went the distance to defeat Tully Sparks, 2-1, in a 20-inning game. For the 1905 season the 22-year-old rookie posted an 18-14 record, a 1.42 ERA, and only 208 hits allowed in 290⅔ innings (6.42 per nine innings).

Reulbach remained one of the NL’s most dominant pitchers through 1909. In 1906 he pitched 12 low-hit games (five hits or fewer), not including the one-hitter he threw against the White Sox in Game Two of that year’s World Series, and started a 17-game personal winning streak that didn’t end until June 29, 1907, when Deacon Phillippe defeated him, 2-1. It was the post-1900 record for consecutive victories until Rube Marquard broke it in 1911-12, and it remains the fourth-longest streak in history.

Reulbach also set an NL record with 44 consecutive scoreless innings late in the 1908 season and led the league in winning percentage each season from 1906 to 1908, a feat matched only by Lefty Grove. On May 30, 1909, Reulbach went on a 14-game winning streak, becoming the only 20th-century NL pitcher with two winning streaks as long as 14 games. He defeated every NL team, including five wins over the Brooklyn Superbas, before he lost again on August 14. A November 1913 article in Baseball Magazine judged Reulbach’s 1909 streak the most impressive in history; in 14 games he surrendered only 14 runs, giving up three on one occasion, while pitching five shutouts and five one-run games. One of the wins came on June 30, 1909, in the first game ever played at Pittsburgh’s Forbes Field.

Reulbach’s magnificent five-year run finally ended in 1910, when he tailed off to 12-8 with a 3.12 ERA in only 173⅓ innings; he and Nellie had one child, a son on whom Ed doted, and Ed missed part of the season to be at his son’s bedside during an attack of diptheria. Reulbach improved to 16-9 with a 2.96 ERA in 1911, but the following year his record dipped to 10-6 while his ERA ballooned to 3.78. In July 1913, with his record a mere 1-3 to go along with a 4.42 ERA, the Cubs practically gave him to Brooklyn for cash and a mediocre pitcher named Eddie Stack. In his first six days with his new team, Reulbach proved that he still could pitch by giving up only two hits in 16 innings. Over the second half he posted a 7-6 record and 2.05 ERA, but the most telling sign that he had returned to form was his ratio of hits per nine innings: a typically Reulbachian 6.30 (77 hits in 110 innings). Reulbach’s stellar second half earned him the starting assignment on Opening Day 1914, when he defeated that year’s eventual World Series Champions, the Boston Braves. Despite his 11-18 record, the veteran right-hander was Brooklyn’s second-best pitcher in 1914, compiling a 2.64 ERA in 256 innings.

Off the field, Reulbach was the secretary and one of the founding members of the short-lived Baseball Players’ Fraternity. One of his ideas was for major leaguers to sign a pledge of total abstinence from alcohol. His efforts to raise player salaries were more popular with his colleagues, but they may have cost him his job with Brooklyn. One day during the 1914 season, owner Charlie Ebbets offered team captain Jake Daubert a $500 raise for the coming year. An excited Daubert told Reulbach while the team was en route to Chicago, but Ed advised Jake not to sign right away, figuring that the Federal League would offer even more when the train arrived in Chicago. Daubert refused to sign until Ebbets increased his offer to $9,000 per year for five years, a whopping raise of $5,000 per year. Reulbach himself was offered a big contract from the Feds, possibly as an incentive to induce other teammates to sign, but Ed declined. He ended up signing with the Feds anyway because Ebbets released him after learning that he was a ringleader in the movement to raise salaries, and (perhaps not coincidentally) no other National League team offered him a contract.

With the Federal League’s Newark Peps, Reulbach put together one last outstanding season in 1915, going 21-10 with a 2.23 ERA. Among that year’s highlights were his Opening Day triumph over Chief Bender and his 12-inning win over former Cubs teammate Mordecai Brown. Reulbach also pitched and won the final game in Federal League history, defeating the Baltimore Terrapins, 6-0, in the second game of an October 3 doubleheader. The Pittsburgh Pirates acquired the rights to the big right-hander in the Federal League dispersal draft but sold him to the Boston Braves just before the start of the 1916 season. Reulbach pitched mostly in relief for the Braves over next season and a half before ending his career in baseball with Providence of the International League in 1917.

Reulbach’s post-baseball years weren’t happy ones. He spent a fortune trying to save the life of his constantly ill son, who ended up dying anyway in 1931, and an article in the Chicago Tribune the following year referred to Ed at age 50 as a “sad and lonely man.” Considered one of baseball’s brainiest during his playing days—teammate Johnny Evers claimed that Ed was “always five years ahead of his time in baseball thought”—Reulbach still devoted much of his time to thinking about baseball. In 1945 he copyrighted the “Leadership Development Plan,” under which the then-important position of captain was rotated among all nine players, one inning at a time, as a means of developing leadership qualities. Reulbach died at age 78 on July 17, 1961, in Glens Falls, New York.