This article was written by Fred Schuld 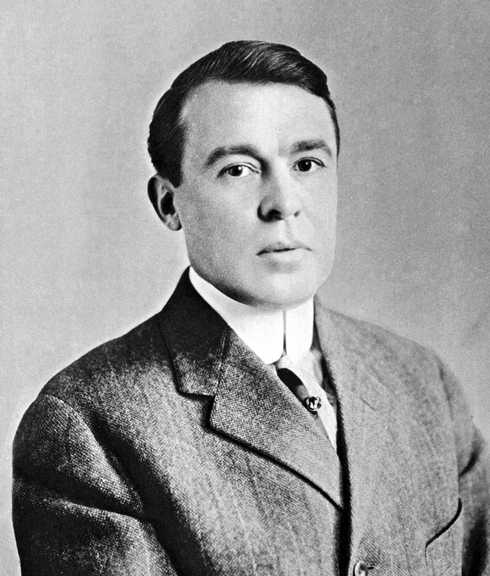 Once called the “good angel of the American League,” Charles Somers was much more than one of the league’s founding members; he was also its principal financier. A shy, unassuming man who made his fortune in the coal business, Somers brought major-league baseball back to Cleveland in 1901, and also helped the junior circuit establish clubs in Chicago, Philadelphia, and Boston. At one point, the free-spending magnate was part-owner of four of the league’s eight franchises. “[Somers’s] faith in Ban Johnson and his open checkbook were the legs upon which the American League learned to walk,” writer Franklin Lewis observed in 1949. “Without them, there would be no American League today.” Yet Somers’s enthusiasm for the national pastime also led to his downfall, as the magnanimous yet meddlesome owner failed to lift his Cleveland franchise into contention. Bankrupt by the end of his 16-year tenure, Somers was obliged to sell off his biggest star before his creditors forced him out of major-league baseball for good in 1916.

Charles W. Somers was born on October 13, 1868, in Newark, Ohio, the only child of Joseph Hook and Philenia McCrum Somers. Joseph Somers worked in the coal-shipping business, and in 1884 the family moved to Cleveland, where Joseph established the J.H. Somers Coal Company. Under Joseph Somers’s stewardship the company became very successful, opening numerous mines in Ohio and Pennsylvania. After attending business school, Charles began working for his father, though he soon ventured out on his own. He later described his first years in the business world this way: “Kept store for my father. Went on the road as a salesman. Got into the coal business on my account. When I could not buy outright attractive mining properties, I managed to obtain them by lease. Kept at it for ten years. Then sold out.” At the age of 31 he was worth $1 million. The young millionaire returned to his father’s coal operation as general manager.

But the budding coal magnate had bigger dreams, and an avid interest in the national pastime. A fan of the Cleveland Spiders of the 1890s, Somers joined forces with John F. Kilfoyl, a local haberdasher who was interested in reviving major-league baseball in Cleveland after the Spiders were dropped from the National League when it was reduced from 12 teams to eight after the 1899 season. Approached by Ban Johnson, Somers and Kilfoyl bought the Grand Rapids, Michigan, team of the Western League and moved it to Cleveland in 1900. When Somers’s father learned that his son was preparing to invest in the new American League, he discouraged him, warning Charles not to associate himself with “such a foolish and unprofitable thing as baseball.” Undeterred, Charles disregarded his father’s advice.

Kilfoyl became the nominal president of the new club, while Somers served as vice president of both the Cleveland franchise and the American League. Using his quiet leadership and deep pockets, Somers strengthened the fledgling circuit at a critical moment in its history. In the first three years of the American League, Somers loaned or spent close to $1 million on other American League franchises. He helped Connie Mack establish a team in Philadelphia and financed the principal owner, Ben Shibe, with a substantial loan for a new ballpark. Shibe had been worried about investing in baseball in Philadelphia with so much National League opposition, but Somers wired Ban Johnson: “We will cure Shibe of his shyness. Tell Connie Mack to find the grounds and I’ll put up the money.”

Somers also loaned Charles Comiskey money to build a new grandstand for his ballpark in Chicago, and when the Buffalo franchise was transferred to Boston, he founded the American League team there after no local purchasers came forward. Upon assuming control of the Boston franchise in 1901, Somers temporarily transferred his Cleveland ownership to Kilfoyl. During his two-year stewardship of the Boston Somersets, as sportswriters referred to the team, Somers lured stars Jimmy Collins and Cy Young away from the National League, thereby immediately establishing a strong competitor for the Boston National League team. In 1902, Somers was able to reassume his co-ownership of the Cleveland franchise after selling his Boston interests to Henry J. Killilea, a Milwaukee lawyer.

During the Somers era, the Cleveland Naps, as they were known after their manager and star second baseman Nap Lajoie, annually boasted one of the league’s most talented rosters. In addition to Lajoie, the Naps were anchored by stars such as Bill Bradley, Elmer Flick, Addie Joss, and Joe Jackson. Yet a frustrating string of injuries and bad luck prevented the Naps from winning the pennant, and as the disappointing seasons mounted for the franchise, Somers became more actively involved in the club’s day-to-day operations. In mid-1910, Kilfoyl sold his interest in the club, leaving Somers as the team’s sole owner.

The club’s nadir came in 1914, when Cleveland finished in last place with a record of 51-102, and manager Birmingham’s authority was publicly challenged by former manager Lajoie, who had resigned from that post in 1909 but continued as the team’s second baseman. The following year, Somers sold Lajoie to Philadelphia and a poll by the sportswriters christened the franchise the Indians, but the changes did not bring success. After the Indians got off to a slow start, Somers ordered Birmingham to play right fielder Joe Jackson at first base, a move the manager resisted. Somers also criticized many of Birmingham’s in-game decisions, declaring that the manager was using the hit-and-run too much and not bunting enough. “I own the club and its success means much to me, probably more than any other man in Cleveland,” Somers told a reporter. “That being so, why should I not take an interest in its management and offer a word of advice now and then when I thought such advice was needed.” Twenty-eight games into the 1915 season, Somers forced Birmingham’s resignation and replaced him with Lee Fohl, but the disheartened club continued to struggle, finishing in seventh place.

Despite the club’s on-field failures during this period, the franchise also enjoyed a few triumphs. In 1909, Somers renovated dilapidated League Park, replacing the old wooden structure with a steel-and-concrete edifice. In 1911 he successfully petitioned the Ohio General Assembly to allow Sunday baseball, making Cleveland the third American League franchise (following St. Louis and Chicago) to host legal Sunday baseball. In 1912, Ernest Barnard, Somers established the first farm system in baseball history, with franchises in Ironton, Ohio; Waterbury, Connecticut; Toledo; New Orleans; and Portland, Oregon. Perhaps because the venture did not prove a success (although the system did eventually produce pitchers Jim Bagby and Stan Coveleski), Banard and Somers’s invention was largely ignored, until Branch Rickey introduced the modern farm system with the St. Louis Cardinals in the 1920s.

By then, however, Somers had long since departed the major-league scene. Financial difficulties proved to be the undoing for this self-made millionaire. An economic downturn in 1914 caused his coal business and lake shipping investments to lose large amounts of money. It was bad timing for Somers, who also had to pay his players higher salaries to compete with the Federal League. Making matters even worse, the Indians finished dead last in the standings and at the turnstiles that year. In January 1915, with Somers owing debts of $1.75 million, a consortium of his creditors took control of the Indians and his minor-league clubs, though leaving Somers nominally in charge of team operations. Desperate for money, in August 1915 Somers traded Joe Jackson to Chicago for three players and $31,500 cash, but the infusion of money was not nearly enough to pay his debts. After the season, the bankers gave Somers an ultimatum: “Get rid of the ballclub or we’ll get rid of it for you.” So early in 1916, Charles Somers, the man whom Ban Johnson would later credit for making “the American League’s ambitious dreams become actual realities,” was out of major-league baseball.

Somers was divorced from his first wife, Cora, in 1906, and later that year remarried a 22-year-old model, Elsie J. Hubbard. Later divorced again, he spent his post-baseball years with his third wife, the former Mary Alice Gilbert, and an adult daughter, Dorothy, from his first marriage. He died at his island summer home at Put-in-Bay, Ohio, on June 29, 1934, after a lingering illness, and was buried at Lake View Cemetery in Cleveland. At the time of his death, the 65-year-old Somers had rebuilt his personal fortune to more than $3 million.