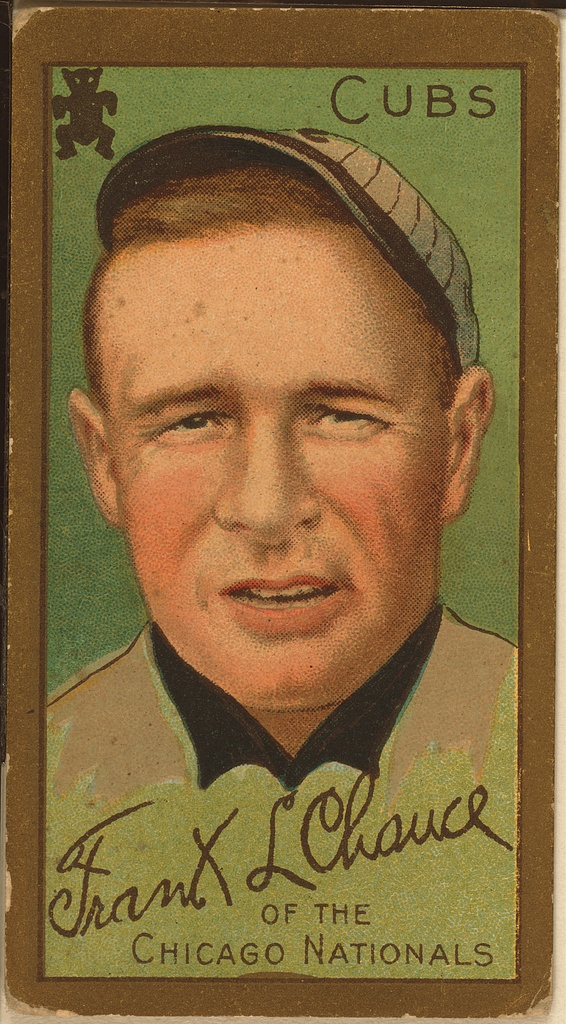 Forever poetically linked to Joe Tinker and Johnny Evers by F. P. Adams’ “Baseball’s Sad Lexicon,” Frank Chance made his mark as the Cubs’ player-manager from 1905 through 1912 as part of the “Tinker-to-Evers-to-Chance” double play infield. Although not widely regarded as one of the game’s greatest fielders, Chance holds a special place in the hearts of Cub fans for his hustle and his hardnosed approach to motivating his players, not to mention guiding the much-maligned Cubs to two World Series titles in 1907 and 1908.

When Selee fell seriously ill in midseason 1905, Frank “Husk” Chance, so named because of his husky physical stature (6’0″, 190 lbs.), was named manager and led a strong, yet unmotivated Cubs team from National League mediocrity to a third-place finish much to the surprise of the Cubs’ faithful. Meanwhile, Chance hit .316 with 92 runs and 70 runs batted in.

The Cubs, now owned by Charles Webb Murphy, retained Chance as both manager and player for the 1906 season. It turned out to be an easy yet brilliant decision on Murphy’s part, as Chance led the Cubs to 116 wins en route to an appearance in the World Series, setting a single season win record that was unmatched until the American League’s Seattle Mariners tied it in 2001 (while playing ten additional games). Individually, Chance had a career season, batting .319 and leading the National League in both runs (103) and stolen bases (57). It is said that Frank Chance stole “baseball’s most expensive base” that season when he stole home from second base—which he had also stolen on the previous pitch—against the Cincinnati Reds to break a late-inning tie, and owner Murphy granted him ten-percent ownership in the club to show his gratitude. Chance later sold his share of the franchise for approximately $150,000.

Although the heavily favored Cubs lost the 1906 “Crosstown Classic” World Series to their Southside rivals, the Chicago White Sox, Chance would lead them back to win in 1907, defeating the Detroit Tigers four games to none; and in 1908, defeating the Tigers again, this time by the count of four games to one. In 1910, Chance’s Cubs were back in the World Series, although they lost that contest to the Philadelphia Athletics in five games. Chance fared much better as a Cubs manager than he ever did as a Cubs player, winning 100 games four out of seven full seasons (not including the 1905 season when he took over for Frank Selee) and never finishing lower than third place in the National League.

Using hardnosed tactics and downright stubbornness, Chance bowled over his opponents, and displayed an infamous lack of good sportsmanship that would make the notorious Ty Cobb blush. Chance once incited a riot at the Polo Grounds after physically assaulting opposing pitcher Joe McGinnity, and on more than one occasion tossed beer bottles at fans in Brooklyn when he felt they were being too unruly, or perhaps not unruly enough. For his fighting prowess (he spent several off-seasons working as a prizefighter), old-school boxing legends Jim Corbett and John L. Sullivan both called Chance “the greatest amateur brawler of all time.” He made outfielder Solly Hofman postpone his own wedding until the off-season lest marital bliss affect Hofman’s playing ability. It was reported that Chance would fine his own players for shaking hands with opposing players, win or lose, and had no qualms about releasing players for failing to meet his demands to the letter. Chance once remarked, “You do things my way or you meet me after the game.” Generally, his players complied, and it is no small wonder that he earned yet another nickname, “The Peerless Leader,” as he was simultaneously respected and disliked by those who played for him, with him, and against him.

Plagued by injuries for a great deal of his career, most notably injured by a barrage of beanings due to his propensity for crowding the plate, Chance’s playing career was cut relatively short. By 1911, he had virtually phased himself out of the everyday lineup, playing in only 31 games over the course of the season. He had completely lost his hearing in one ear and partially lost it in the other, causing him to unintentionally talk in an annoyingly whiny tone. As if that weren’t bad enough, he had also developed blood clots in his brain from the beanings. Incredibly, he was released by the Cubs as both a player and a manager while hospitalized for brain surgery in 1912 after a heated hospital room argument with Cubs owner Murphy over Murphy’s releasing good players to save the team money.

Making a miraculous recovery from his brain injuries, Chance spent the 1913 and 1914 seasons as a player-manager for the hapless American League New York Yankees (resigning late in the 1914 season), yet did not play in more than 12 games in either of the two seasons. He hung up his major league spikes temporarily to return home to California, where he operated an orange grove, and briefly owned and managed the Los Angeles team of the Pacific Coast League. He returned for a short stint in the major leagues in 1923 as a manager for the Boston Red Sox. The Red Sox finished dead last in the American League that year, and the following season Chance accepted the job as manager of his old crosstown nemesis, the Chicago White Sox, drawing the ire of Chicago’s Northside loyalists. However, Chance’s health took an unexpected turn for the worse, precluding him taking the job.  He was ill for several months and he died on September 15, 1924.

One can only wonder what kind of numbers Chance would have put up as a player had he avoided injury or had the modern training, rehabilitation and medical facilities that today’s players have at their disposal. Frank Chance was rewarded for his contributions to the game of baseball, both as a player and a manager, in 1946 when he was inducted into the National Baseball Hall of Fame in Cooperstown, New York, by the Committee on Baseball Veterans. Honored in the same class were former teammates Joe Tinker and Johnny Evers. Poetic justice.

Doug Myers. Essential Cubs: Chicago Cubs Facts, Feats, and Firsts–from the Batter’s Box to the Bullpen, to the Bleachers. McGraw-Hill, 1999.