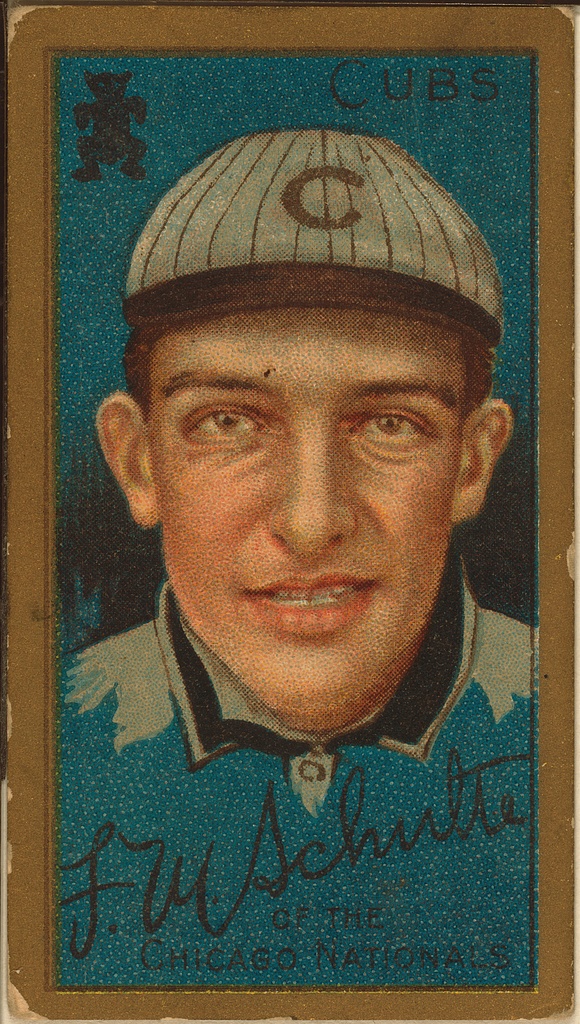 Frank M. Schulte was the slugging right fielder for the great Chicago Cubs teams of 1906-10. After his first start on September 21, 1904, “Wildfire” remained with the Windy City club until 1916, and outlasted the likes of Mordecai Brown, Frank Chance, Johnny Evers, and Joe Tinker, who by the end of Schulte’s days in Chicago, was managing the club.

Born on September 17, 1882 in Cochecton, NY to German immigrant John Schulte, Frank developed his rudimentary baseball skills with his local school team. Before the 1902 season, Frank logged time with teams in Blossburg, PA, Waverly, NY, and Lestershire, NY as well as teams sponsored by a local shoe factory and the Endicott-Johnson Shoe Company.

Not yet seventeen and signed to play in Lestershire, Schulte found himself facing a critical decision about his future in 1899. His father, who had carved a niche for himself in the local contracting business, worried that his youngster had found a profession that was less than “honest”. The elder Schulte coaxed, threatened, and finally made an offer to young Frank that few boys of his age or era could have passed up. The German gentleman, hoping that his boy could prove himself a productive citizen by keeping books for his contracting interests, offered Frank a thousand “plunks” to burn up his baseball suit. However, young Schulte staunchly clung to his chosen profession, one that would eventually reward him with princely sums that dwarfed Papa Schulte’s offer. Prolific Chicago sportswriter Warrren Brown claimed that Frank’s World Series shares alone totaled $6,160.28.

In 1902 Frank took a major step forward by leaving the independent ranks and signing with the Syracuse Stars of the New York State League. Here he settled into his position in the “outer garden” and came into contact with ex-major leaguers who helped him to hone his skills and to deepen his understanding of the National Pastime. Though he batted .280, 294, and .307 respectively from 1902-04 in Syracuse, his discovery was a classic case of being in the right place at the right time.

George Huff, a scout for Frank Selee‘s Cubs, had trekked to upstate New York to assess a youngster named Magee. Manager Selee was looking to shore up his dynamic, but ailing, outfield trio of Jimmy Slagle, Jack McCarthy, and Davy Jones. This Magee, unlike his namesakes Sherwood Magee and Lee Magee, passed into baseball oblivion, but Huff was taken with the talent exhibited by Schulte and Mike Mitchell, whose contracts were purchased by the Cubs on August 21, 1904.

Thus on September 21, 1904, Frank Schulte got his first start in the National League against Bill Duggleby and his Phillie teammates. Filling in for Slagle in both left field and at the top of the batting order, Schulte slammed three hits (including a triple) in the first game and managed a single and a double off of Tully Frank Sparks in the second game of the double-header. The boy who had turned down his Daddy’s money had entered manhood on a team destined to blossom into what Warren Brown would dub “the team which will be recalled as long as baseball is played.”

Perhaps as dangerous on the base paths as at the plate, Schulte, who daringly stole home 22 times in his career, became a fixture on Chance’s Cub “machine”. Along the way he picked up the nickname that became synonymous with him. Legend states that Schulte admired actress Lillian Russell and that he and his teammates saw her perform in a play called “Wildfire” in Vicksburg, Mississippi. The Cub players then enjoyed a party thrown by Russell, and Schulte, an owner of race horses (some of which were trotters he raced on ice in upstate New York) subsequently named one of his trotters Wildfire. Before long the Chicago sportswriters got wind of these developments, and he too became known by the name.

Schulte’s eccentricities weren’t limited to his nickname, as he prompted Tinker to “doubt…whether a quainter or more original character ever existed in the National Pastime.” Wildfire was known to comb the streets looking for hairpins; he claimed that they predicted his success in the batter’s box. The bigger the hairpin, the greater the success Schulte would achieve. A bent hairpin, he further surmised, indicated the direction of his upcoming safety.

This “attention to detail” brought Charles Dryden, writer for Philadelphia’s North American and later for various Chicago publications, to opine, “More athletes would have won renown and more horse blankets floated in the breeze had athletes gone out hunting hairpins instead of loafing around playing pinochle and pool.” Horse blankets are a euphemism for league winning pennants. Whether pounding the city pavement in pursuit of hairpins or working on his 367-acre peach and cotton plantation near Atlanta, Georgia, the fresh air suited Schulte.

Like others, Schulte was also known to blame his shoes for hitting slumps (ergo, the term “hitting shoes”) and unlike others, to utilize unusually thin-handled, forty-ounce bats that were called “switches” by his peers. The thin handle and its accompanying bevy of cracked lumber has come into vogue in the modern game, but to break fifty bats during a deadball season, as Schulte did in a typical season, was unheard of.

While performing solidly during regular seasons, Wildfire hit full stride during his four World Series appearances. He owns a .309 lifetime average in the Fall Classic, hitting safely in all ten contests in the 1907 and 1908 championships and in all but one game in both the 1906 and 1910 season cappers. Wedged in his four Series appearances is Schulte’s thirteen game hitting streak, a record mark in his day that remains good enough to place him in a tie for fifth (with Harry Hooper) all-time in that category as of 2018.

No look at Schulte’s career is complete without mentioning his blockbuster 1911 campaign. Though the Cubs dropped to second in the final standings that season, Wildfire’s individual exploits earned him a new automobile, the prize for being voted the National League winner of the Chalmer’s Award, a short-lived honor that is roughly equivalent to today’s MVP award. On his way to establishing ownership of the “tin lizzy” (which ironically caught on fire near his plantation sometime later) Schulte mounted one of the era’s great assaults on National League pitching.

He had led the Cubs in homers in 1910 with ten, but, perhaps aided by a somewhat livelier “bulb” in 1911, the Cub right fielder clubbed twenty-one round trippers while driving home 121, both tops in the league. His league bests that year also included 308 total bases and a .534 slugging percentage. He was fourth in hits (173), fifth in runs (105), and became the first player ever to top the twenty mark in the categories of home runs, triples (21), doubles (30), and stolen bases (23). This feat was not duplicated until 1957 when Willie Mays similarly scorched the National League. For good measure, Schulte became the first player ever to clout four grand slams in one season, hit for the cycle on July 20, smashed a homer and a double in the same inning on August 15, and, perhaps surprisingly to modern fans weaned on sluggers who can’t and don’t bunt, was second in the league with thirty-one sacrifices. Finally, despite playing all 154 Cubs games that season, Wildfire even found time to get hitched; he married Mabel Kirby on June 26 in Chicago.

Schulte never again approached his 1911 numbers, but he remained a productive power hitter for several seasons, hitting a dozen homers in both 1912 and 1915 to rank among the NL’s top three in each season. After eight years in right field, he moved back to left in 1914, the year that a feud with manager Hank O’Day nearly caused him to bolt to the Federal League. Schulte continued with the Cubs, however, until July 29, 1916, when he was traded to the Pittsburgh Pirates. Wildfire was the final player from Chance’s 1906-10 champions to leave the Cubs.

At that point Schulte’s career went into a steep decline. After batting .296 with five homers in 72 games in 1916, he fell to .254 without a single home run in 55 games with the Pirates. This lack of power, possibly an indication that Wildfire was ready to be put out to pasture, showed up again in ’17 as the outfielder failed to hit any homers and was sold to the Phillies for the waiver price on June 14. After he batted just .214 with just one homer for the season, the Phillies sold him to the Washington Senators in December 1917. Again Schulte went homerless, though he raised his batting average to .288 in his final season as a major leaguer. In 1918 Frank also experienced personal tragedy as a fire burned down all of the buildings on a farm he owned near Orlando, Florida.

After playing for the Baltimore Drydocks team during the great war, Schulte played in the minors in 1919-22. In 1919 he assumed the dual role of player and manager in Binghamton, New York. Returning in 1920 to Syracuse, where his professional career had begun nearly two decades earlier, Schulte proved that he could still play at age 39 with 39 doubles, 12 triples, and 16 home runs in 1921. He finished his playing career in 1923 in the Pacific Coast League with Oakland.

He settled down in Oakland, California, where he lived the rest of his life with his wife. Frank was stricken with paralysis for a time in 1930. He passed away at age 67 on October 2, 1949 at Merritt Hospital in Oakland, just three days before Game One of that year’s World Series.