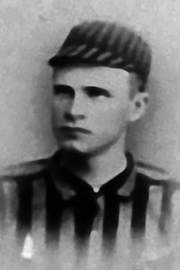 At the time of his death, Fred Roat was remembered fondly as “one of the base ball celebrities of the country” who had “played contemporaneously with Billy Sunday of evangelistic fame and was at one time a protégé of the renowned Captain Anson.”1 Despite the flowery description of his baseball ability, however, Roat’s major-league career was brief: 57 games in 1890 and eight more in 1892. He carried on in the minors, however, through 1899.

Fredrick R. Roat was born in Oregon, Illinois, on November 10, 1867, to Samuel Roat (1846-1905) and Margaret Victoria “Maggie” Roat (1842-1920). Samuel was a Civil War veteran and worked as foreman at the Oregon Reporter print shop. Maggie Roat, née Phelps, was a niece of John Phelps, who founded Oregon (about 100 miles west of Chicago) in 1830. Roat’s fraternal grandfather, Samuel Roat (1820-83), was a harness master in the town with a shop at Washington and Third Streets. Fred Roat’s only sibling was twin brother George Phelps Roat (1867-1942). Roat worked winters for his father mixing paste at the print shop and doing general handyman work.2 Described as “tall and well-built,” he was known to his friends as “Rick.”3

Roat’s professional baseball career began as a 20-year-old in 1888 with the Danville (Illinois) Browns of the Central Interstate League. The club fell on tough times and folded in July, though, financial casualties of blue laws that outlawed Sunday baseball.4 Roat played for Danville again in 1889, which had become a member of the Illinois-Indiana League. There are no statistics available for Roat for those two seasons; however, he presumably played well enough to garner the attention of the National League’s Pittsburgh Alleghenys.

Prior to the 1890 season, Roat found himself choosing between offers from Pittsburgh and the Terre Haute Hoosiers of the Central Interstate League, reportedly each at a salary of $150 per month (approximately $4,300 today).5 Roat signed with Pittsburgh. When he arrived at Pittsburgh, he was depicted as “a stoop-shouldered, gaunt looking fellow wearing a slouch hat and big gum shoes,” which made it newsworthy when Roat eventually “gave in and bought a Derby.”6

Roat made his major-league debut on May 10, 1890, a game in which he collected his first big-league hit while playing right field and first base against the Cincinnati Reds. Roat initially appeared nervous in the field, with wild throws causing “many a yell of disgust from the small crowd.” (The Pittsburgh club drew just 16,064 fans that season.) As his confidence grew, Roat was lauded for his defensive play and the “crowd quit calling him ‘farmer.’” His batting improved as well and Alleghenys President J. Palmer O’Neill was soon entertaining offers for Roat, including a “good one coming from Philadelphia.”7

The 1890 Alleghenys – for whom Billy Sunday played in 86 games before an August trade – ended the season 23-113 (.169). That was the worst winning percentage ever in the majors at the time; it was eclipsed by the 1899 Cleveland Spiders, whose 20–134 record and .130 winning percentage remains the benchmark for ineptitude. Despite the anemic lineup, Roat found himself behind Doggie Miller on the depth chart at third base. Miller was easily the best player on the team by bWAR (3.0). Roat finished his rookie season hitting .223/.286/.260 in 234 plate appearances, with two home runs and seven stolen bases.

On December 9, the Pittsburg Daily Post reported that Roat “never felt better in his life and he would be able to take hold of third base next year, and keep it too.”8 Roat worried, however, that he had not received any contract since he had arrived home in Oregon, unaware that Pittsburgh had sold him to the Reds for $300.

A cryptic article from December 13, 1890, hinted that Roat had previously been “laid low by a little indiscretion in Cleveland” and that he could “thank his stars he ever recovered, from what the balance of the boys say.”9 Roat never played for Cincinnati, however. He was cut after arriving at training camp looking like he was on “death’s doorstep” — which called into question the extent of his recovery from the mysterious “indiscretion.”10 Instead, Roat split his 1891 baseball season between the Lincoln (Nebraska) Rustlers (Western Association) and Rockford (Illinois) Hustlers (Illinois-Iowa League). He hit .243 in 83 total contests between the two teams.

In 1892, Roat signed to play for the Western League’s Milwaukee Brewers. Prior to the season, however, he suffered severe injuries to his left foot, thigh, and little finger when he was attacked by a dog.11 After the season was underway, the Chicago Tribune reported on May 24 that Roat’s arm was in such poor shape at third base that he had to throw the balls he fielded to the pitcher, who then threw on to first base to complete each putout.12 One wonders why he was in the lineup at a position that demands arm strength.

Oddly, Roat was also used at another spot requiring a good arm: right field. In another game, Roat robbed St. Paul Saints catcher-outfielder Sy Sutcliffe of a home run when he “pulled himself upon one of the braces of the fence and throwing up his right hand caught the ball.”13 This passage suggests that right-handed Roat could have caught the potential home run ball barehanded. Alternately, he may have been wearing the glove on his typical throwing hand, perhaps experimenting with throwing left-handed because of his documented arm troubles.

Despite his lingering arm troubles, Roat led the Western League in batting average as of June 6.14 When the Milwaukee club disbanded in midseason (on July 7), Roat was sold to the Chicago Colts of the NL – managed by Cap Anson – for $1,500.15

Roat made his Colts debut on August 10, 1892, at second base.16 He was 0-for-4 at the plate and made an error in the eighth inning that led to a run. On August 12, Roat was 0-for-4 against Cy Young and the Cleveland Spiders. On August 18, he rapped his lone big-league triple, but “knocked his shoulder out,” such that he was expected to “join the disabled ones for a fortnight at least.”17 Roat was unceremoniously released on August 23.18 His time with Chicago was unspectacular – he hit just .194/.242/.258 in eight games. Roat’s brief major-league career had ended, but his professional baseball career was far from over.

Roat spent the 1893 season with the New Orleans Pelicans (Southern Association). He hit .322 in 73 games, which “ranked high in official batting averages of [the] league.” He found himself back with the Pelicans to begin the 1894 campaign.19 Dubbed “Old Malaria” – for reasons unknown – Roat hit .286 in 64 games before leaving the club in July.20 Although it was reported that he “finally suited up with Sioux Falls,” Roat instead finished the 1894 season in the Western League with the Indianapolis Hoosiers. There he hit .330 in 54 games despite suffering from an injury described as a “split finger.”21

Roat returned to Indianapolis in 1895, and that season proved to be the pinnacle of his playing career. He “played with a vengeance, regained his shortstopping youth and hit so well and fielded so brilliantly that he was one of the most talked of men in the league.”22 His play even drew the ire of an opposing fan at Toledo who lobbed a “chunk of bologna sausage” at his head in June.23 In the second game of a Labor Day doubleheader, Roat made headlines by recording six hits in seven at-bats and posting five putouts and eight assists in the field.24 Roat finished the 1895 campaign with a .388 batting average, .530 slugging percentage, 203 hits, 24 doubles, 16 triples, six home runs, and 12 stolen bases — all career bests. His Hoosiers were crowned champions of the Western League and arrived back in Indianapolis to a brass band and crowd of 3,000 gathered at the train station to escort the club to a raucous celebration at the Grand Hotel.25

Roat signed his contract to play for Indianapolis in 1896 “without a comment or objection.” That came as a surprise to manager Bill Watkins, who quipped, “ballplayers, as a rule, have a great deal to say about their contracts, and it seems to be an unwritten rule among them that before signing they must make some sort of a protest, if only to show their independence.”26 Roat hit .326 in 52 games for the 1896 Hoosiers.

Despite his success in Indianapolis, Roat’s tenure with that club was over. He was traded in December 1896 to the Grand Rapids Bob-o-Links of the Western League in a six-player swap.27 In 1897, he split his time between the Grand Rapids and Minneapolis clubs (no statistics available). He stayed in the WL in 1898, joining the Omaha/St. Joseph club, for which he hit .223 in 135 games.

Roat signed with the Buffalo Bisons, yet another Western League franchise, for 1899. However, he was released on April 19, having not appeared in a game for the club.28 He caught on with the Eastern League’s Toronto Maple Leafs. The Indianapolis News reported on July 13 that “Fred Roat, he of the mighty and erratic arm, whose hair-raising throws have often sent chills down the back of the Indianapolis cranks, is said to be playing a sensational game at second base for Toronto.”29

The end of Roat’s professional career is murky. It is not immediately clear whether he completed the 1899 season at Toronto or was released prior to their final game. Roat “turned up” in Cortland, New York and was offered $100 a week to finish the season with the Wagonmakers of the New York State League. He reportedly played two games, got his money, and skipped town.30 This appears to have been the final stop on his professional baseball journey.

In the 1910 census, Roat was listed as a resident of Watertown State Hospital in East Moline, Illinois, an institution previously called “Western Hospital for the Insane” and still in use as a minimum-security prison. No information, however, has been located to show the reason for this hospitalization.

Roat was next mentioned in the newspapers on May 27, 1912, when it was reported, “Fred Roat, yard foreman at the Northwestern yard, had a narrow escape from death Saturday afternoon.” In boarding a boxcar, the handle pulled loose, causing him to fall under the wheels.32 Roat escaped with a “mashed toe on his right foot.”

Fred Roat died the following year, on September 24, 1913, at the age of 45. An article detailing his passing mentioned only that he was survived by his mother and twin brother George, perhaps an indication he had become estranged from his wife and son.33

Roat’s grave is found in a tiny hilltop cemetery in Oregon, Illinois, overlooking the Rock River — a picturesque resting place that belies the unrest Roat endured in his later life.

Special thanks to Bruce Allardice for his assistance with Fred Roat’s family and background information.

This biography was reviewed by Bill Lamb and Rory Costello and fact-checked by Kevin Larkin.

www.baseball-reference.com. Baseball-Reference.com has little statistical information available for Fred Roat’s 1896 and 1897 seasons and otherwise does not show him as a member of the 1899 Cortland Wagonmakers.

30 “Baseball in the State League,” Buffalo Inquirer, September 15, 1899: 4. Baseball-Reference does not show Roat as a member of the 1899 Cortland Wagonmakers.