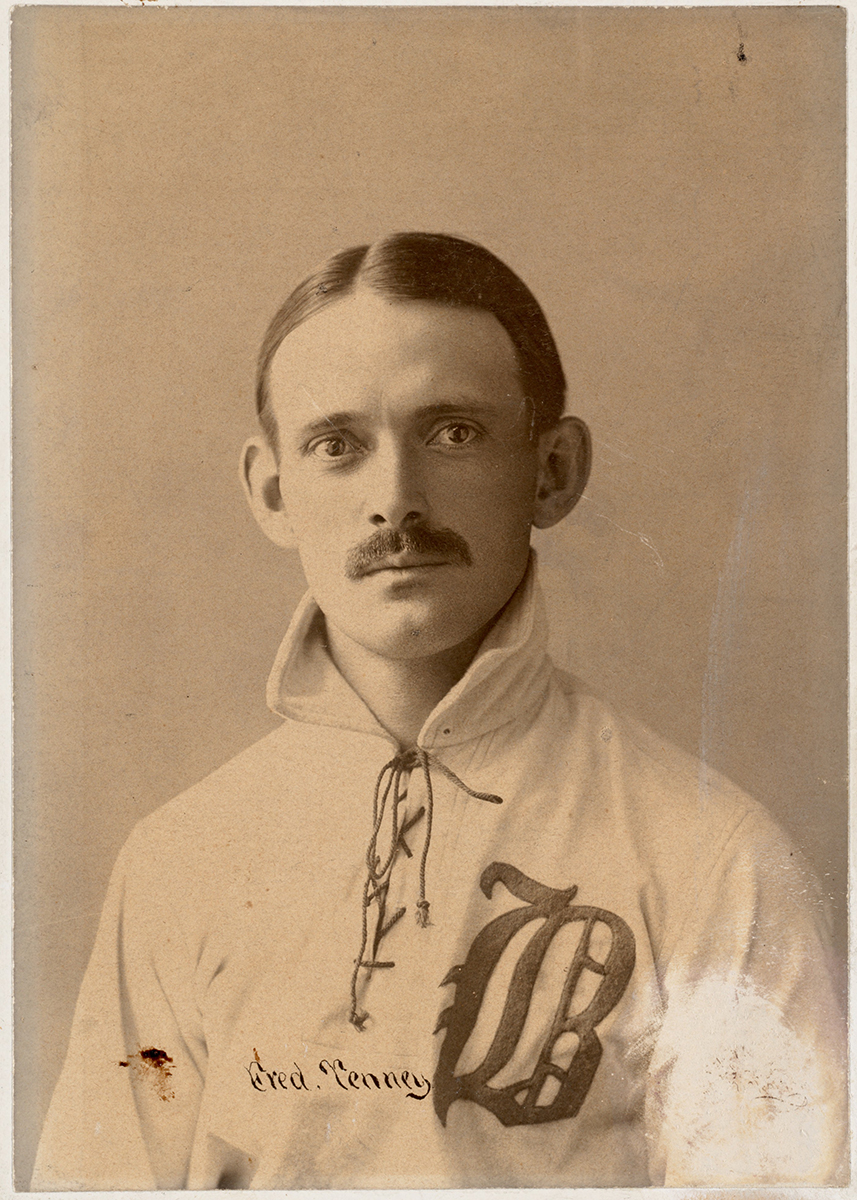 When it came to fielding prowess, the consensus was that Fred Tenney ranked behind only Hal Chase among first basemen of the Deadball Era. Considered the originator of the 3-6-3 double play, Tenney also developed the style of playing deep and well off the bag, as modern first basemen do. “Tenney’s way is far different from that of other first baseman,” wrote a Chicago News reporter in 1897. “He reaches his hands far out for the ball, and stretches his legs, so that he is farther out from the bag on every throw than any other first baseman in the league.” With his unconventional methods that soon became the norm, the 5’9″, 155 lb. first sacker led the National League in putouts in 1905 and 1907-08 and assists each year from 1901 to 1907, setting a major-league record with 152 in 1905 that lasted until Mickey Vernon topped it in 1949. As for his offense, Tenney was a masterful bunter and exceptional place hitter who batted over .300 seven times in his 17-year career, retiring in 1911 with a .294 lifetime average.

Grandson of a former Massachusetts state treasurer and son of a Civil War veteran, Frederick Tenney was born in Georgetown, Massachusetts, on November 26, 1871. Fred’s nickname, the “Soiled Collegian,” came from his aggressive playing style and his degree from Brown University, where he was a left-handed catcher. Late in the evening of June 15, 1894, the night of his senior dinner, he received a telephone message from Boston Beaneaters manager Frank Selee, who was in urgent need of a fill-in for his injured catchers. After going to bed at 4 a.m., Fred arose early, looked for his absent roommate until he found him sleeping under a tree on campus, took a shower at the gym, had breakfast, and caught the train from Providence to Boston. That afternoon he made his NL debut, catching the entire game even though a foul tip fractured the forefinger on his throwing hand in the fifth inning. The Beaneaters offered him a contract despite the injury. The 22-year-old rookie rejoined the team a month later when his finger mended, demonstrating his offensive potential by batting .395 in 27 games.

Tenney spent short stints in the minor leagues in each of the next two seasons. He hit well enough during his time in Boston, especially in 1896 when he batted .336. The problem was his defense; Selee thought his throwing arm from behind the plate was erratic, so the former collegian played more frequently in the outfield. Tenney didn’t become a regular until 1897 when Selee switched him to first base, completing an outstanding infield that featured Bobby Lowe at second, Herman Long at short, and Jimmy Collins at third. The Beaneaters won the first of two consecutive pennants with a 93-39 record and Tenney batted .318 while leading the league in at-bats. That year he also started what may have been the first-ever 3-6-3 double play. “We were playing Cincinnati in Boston when the batter hit the ball over first,” Fred recalled. “I grabbed it and threw to Long, then hurried to the bag and took Long’s throw for a double play. It seemed that you could have heard a pin drop for 10 seconds, and then the crowd just let out a roar. It had seen something new.”

A left-handed hitter, Tenney topped the .300 mark in four of the next six seasons, including a career-high .347 in 1899, by employing Willie Keeler’s strategy of “hitting ’em where they ain’t.” His performance in an exhibition game at Portsmouth, Ohio, provides a glimpse of his offensive strategy. Tenney’s first time up, the Portsmouth shortstop was crowding second base. “You’re too far over; I’ll hit the ball through the hole,” Fred said. The shortstop just laughed so Tenney singled through the hole. His next time up, the shortstop was playing in the hole. “Now you’re too far the other way,” said Fred. He promptly singled over second base. “We’d be willing to lose every day,” wrote a Portsmouth reporter, “if Tenney would only come back and hit some more balls through the infield.” In addition to his skill as a place hitter, Fred was a magnificent bunter who led the NL with 29 sacrifice hits in 1902, when he also finished in the Top 10 in batting average (.314), on-base percentage (.409), bases on balls (73), and runs (88).

Having established himself as one of the NL’s leading stars, Tenney received lucrative offers from the St. Louis, Cleveland, and Detroit Americans throughout the 1901-02 seasons; the Tigers reportedly were even willing to raise Fred’s $2,500 salary to $7,000. Speculation that he would jump became rampant after he got into a brawl with Pittsburgh Pirates player-manager Fred Clarke on May 15, 1902-“Clarke called me names, then I twisted his nose, and he kicked me in the stomach,” Tenney claimed-prompting a fine and a 10-game suspension. But Tenney stuck with the Nationals, mainly because of his friendship with longtime Boston co-owner Arthur Soden, and his loyalty was rewarded when he was named captain in 1903 and manager in 1905. Fred learned of the latter appointment shortly before spring training when Soden asked him to clean out former manager Al Buckenberger’s desk. He received no additional pay but was promised a bonus if the club didn’t lose money.

With a three-year record of 158-295 in his first stint as Boston manager, Tenney lasted mainly because the owners cared more about breaking even financially than winning games. Fred served as first baseman, field captain, manager, and even business manager, handling baggage, hotels, and receipts, going into the stands to retrieve foul balls, and taking tickets on Sundays (for most of his career he refused to play on the Sabbath). In July 1905 the Boston Traveler reported that he was on the verge of making history by signing William Clarence Matthews, an African-American middle infielder from Harvard. Tenney, who also coached at nearby Tufts University during the offseason, presumably had seen Matthews perform and felt comfortable playing alongside a fellow Ivy Leaguer, but Boston ended up not signing the “black Matty,” most likely because the other NL clubs objected, and the team kept on losing.

The Boston Nationals finished last for the first time in their history in 1906. On August 7 of that season Tenney and umpire Bill Klem made front-page news with their fracas over unused baseballs. Accounts differ, but as Klem prepared (or declined) to return extra balls after the game, Tenney started searching Klem’s pockets, whereupon the two exchanged punches, leading to what Sporting Life called “the most turbulent scene ever witnessed on a [Boston] ballfield.” Tenney received a two-game suspension but earned his bonus and soon became a part-owner of the penny-pinching franchise. Perhaps due to his investment, Fred played on Sundays for the first time in 1907, a season in which Boston finished with a 58-90, seventh-place record – not good, but easily the top mark of Tenney’s three-year tenure as manager. An August 29 cartoon depicted Tenney on tiptoes, reaching for a balloon marked “6th Place,” an impossible dream for a Tenney-led team.

On December 3, 1907, Boston sent Tenney to the New York Giants in an eight-player trade even though he continued to own stock in the Boston franchise, a conflict of interest that somehow escaped notice. Free of his management duties, the 36-year-old first baseman focused on playing, enjoying his last productive season in 1908. “He is like wine – he improves with age,” wrote W. S. Farnsworth in the New York Evening Journal. “He is not only playing a grand game, but his coaching is making the youngsters, [Al] Bridwell and [Larry] Doyle, the spiciest pair ever to cavort around the keystone corner of an infield. And his great ability to ‘stretch’ has given Arthur Devlin the greatest fielding season he has had since joining the Giants. With his swatstick, too, Tenney has a record to be proud of.” Though he batted just .256, he led the NL in runs (101) and ranked second in walks (72). Tenney also started 156 of 157 games at first base (the Giants played three ties), but the one game he missed due to a back injury allowed Fred Merkle his day of infamy, ultimately costing the Soiled Collegian his only chance at a World Series. Battling leg woes in 1909, Tenney batted a career-low .235 in just 101 games, drawing his release after the season.

After spending the 1910 season with Lowell of the New England League, Tenney reluctantly returned as Boston’s player-manager in 1911-a condition on which the team’s new management insisted before buying back his shares of stock. With a record of 12-41 in mid-June, the 39-year-old first baseman remained as manager but lost his captaincy to Johnny Kling, who ultimately became manager in 1912. Because Tenney had a two-year contract, however, he got paid not to manage in 1912, an ironic conclusion to a managerial career that initially saw him manage without pay.

Tenney worked in Boston for the Equitable Life Insurance Society for more than three decades. When friends introduced him as “the best first baseman who ever lived,” he typically replied, with a smile, “Thank you, but you know as well as I do that there was only one first baseman-Hal Chase.” At least as far back as 1901, Tenney had served as a correspondent for Baseball Magazine, the Boston Sunday Post, and the New York Times, and he returned to writing in his post-baseball career, typically describing the strengths of pre-Deadball stars without suggesting that the game had declined in the years since. Local newspapers also ran his rudimentary caricatures of players and fans at spring training. Fred Tenney died at age 80 on July 3, 1952, at Massachusetts General Hospital in Boston, just a few miles away from the South End Grounds where he had roamed the right side of the infield for so many seasons.