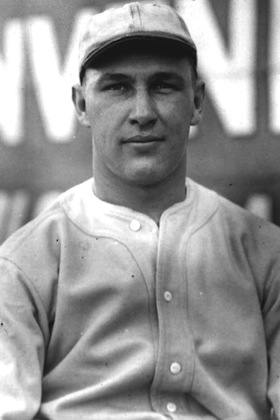 “Handsome Hal, the Hoboken Hercules” – such was said to be the Brown University characterization of Hal Neubauer.1 Once he had his Ivy League degree in hand, the young graduate went almost straight to work for the Boston Red Sox.

The right-handed pitcher debuted in the major leagues on July 12, 1925, pitching in relief for the Red Sox in Cleveland. The score was 8-2 in favor of the Indians, after starter Howard Ehmke threw the first six frames. Red Sox manager Lee Fohl asked Neubauer to wrap things up. He did, and got through the seventh OK, but the Indians had a “picnic” in the eighth. He walked the first two batters he faced (Tris Speaker and Joe Sewell) on eight pitches. A hit-and-run scored Speaker, and five runs in all scored in the two innings he had to work, but he got through it. Three of the five runs were earned, thanks to three of the six errors the Red Sox committed during the course of the game. Cleveland won, 13-2. The Red Sox record so far was 25-55, and they were already 28 games behind the first-place Washington Senators.

He’d been quite a star at Brown. A member of the Class of ’25, Neubauer pitched for the team all four years he was at Brown, and Brown fielded very strong teams in those days. Nationally syndicated sportswriter Hugh Fullerton wrote during Neubauer’s sophomore year that Brown was “the perennial smasher of pennant hopes of large eastern colleges.”2 For years it had been Princeton and Brown at the top of the heap, though in the years following World War I, Brown had faded. Now, in 1923, they had come back strong. The coach was Dr. Walter Snell, a botany professor who served as an athletic coach at the college in Providence from 1921 to 1939. It’s not clear if Fullerton realized that Dr. Snell was the same Wally Snell who had himself played in six games for the 1913 Red Sox. The star pitcher in 1923 was Elmer Duggan, but Fullerton noted, “Harold Neubauer from Hoboken, a big right hander with a world of speed.”

Neubauer was 6 feet tall and listed at 185 pounds. He was a native of Hoboken, born there on May 13, 1902. Neubauer’s parents were Freda and Harry Neubauer and they lived in the home of Freda’s parents, Carl and Marie Schummel. Carl was a railroad engineer and his son-in-law, Harry, was a brakeman. Freda was a native of Germany. Harold Neubauer traced his own ancestry in America back to one Isaac Pearce, which permitted the Red Sox pitcher’s son to be accepted into the Sons of the American Revolution in 1962. In 1920 Harry and Freda still lived in Hoboken with their only child, and Carl Schummel, with Harry now working as a salesman of leather goods. Their son attended high school in Hoboken and then Worcester Academy.

Elmer Duggan graduated from Brown in 1924 and signed with the New York Yankees (he never made the majors), and Neubauer opened his own senior-year baseball season with an 18-0 no-hitter (called after six innings) against Clark on April 16, 1925. He was already a married man, having wed Madeleine Gay Fish during the first month of his senior year, on September 5, 1924.

He wrapped up his time at Brown and graduated in June 1925 with five varsity letters – two in football (as halfback, guard, and tackle) and three in baseball. In his four years at Brown (he’d started before the rule barring freshmen from varsity sports), he’d won 23 games and lost only seven. A feature in the Boston Globe said Neubauer was to teach in the fall at the Suffield School in Suffield, Connecticut.3

A week and a day later, the Globe announced that the Red Sox had sent pitcher Joe Lucey back to the minors and signed Neubauer.

The day after Neubauer’s July 12 debut, he pitched again and picked up a win. He again pitched the seventh and eighth innings, this time entering the game with Cleveland ahead, 11-7. But while Neubauer threw two scoreless innings, the Red Sox scored five times to take a 12-11 lead (the tying and go-ahead runs coming when Roy Carlyle pinch-hit for Neubauer in the top of the ninth and hit a home run more than 20 feet over the right-field wall and onto a building across the street beyond.4 Ted Wingfield pitched the bottom of the ninth for a save.

Neubauer pitched twice more in July, less successfully, and had an earned-run average of 18.56 at month’s end. On the last day of the month, he pitched for the semipro Mattapan Town Team and beat the Twilight Stars, 8-4, at a game in Dorchester. Red Sox catcher Al Stokes joined him for the game. Neubauer pitched twice in August and once in September, his final appearance coming on September 8, a scoreless inning that brought his ERA down to 12.19.

Neubauer left the ballclub before the season was done, to take up coaching football at Suffield. His plan was to coach basketball over the winter, but he would have to forgo becoming the baseball coach in the spring because of the need to report to the Red Sox camp for spring training.5 His future with the team was regarded as “promising.”6 He worked out with the team in New Orleans and near the end of spring training he, Jack Russell, and Rudy Sommers were seen as “three pitchers all of whom should eventually be of value to the club.”7

An amusing incident occurred during that spring. Baseball Commissioner Kenesaw Mountain Landis phoned the Bienville Hotel in New Orleans, where the Red Sox were staying, and asked for team owner Bob Quinn. Mr. Quinn was out, he was told, so he asked for one of the newspapermen. They were out, too. He told the desk clerk that he had an appointment to play golf but was going to be a little late. The clerk told him that one of the players, Harold Neubauer, was a good golfer. The clerk connected the two. “This is Judge Landis,” said the commissioner. Neubauer thought it was a prank call. “Who is it?” he asked. “Kenesaw Mountain Landis talking,” snapped the judge. “Well, this is John McGraw,” quipped Neubauer. “What can I do for you, Kenesaw? Drop around and see me at my office.” Reportedly, the commissioner got a kick out of the call.8

Sommers and Neubauer both started the season with Boston, but on May 5 both were optioned to Columbus in the Double-A American Association. Neubauer never returned to the majors. He had never been to bat in the big leagues. His 10⅓ innings were all in relief, and on the occasions when his time came up to bat, he was removed for a pinch-hitter. He did have three chances in the field and recorded three assists.

Neubauer pitched for Columbus only briefly, and was with the Single-A Albany Senators by mid-July. There is some indication that he might have pitched in one game for Rochester at some point without a decision. What he did in 1927 and 1928 is unknown. He is listed as 0-1 in three appearances for Hartford in 1929. He’s seen here and there pitching some semipro ball in Trenton in 1929 and 1930. He had at one point worked as a reporter in Trenton for the Gazette.9

In 1930 Neubauer began coaching at Lawrenceville and worked there for five years, then moved to Boston. With the end of Prohibition, he had begun work in the distilling field and worked with National Distillers and then as New England manager for Fleischmann Distilling. On November 5, 1936, he was appointed New England district manager for Hiram Walker, Inc.10 Neubauer was one of the founders of the Massachusetts Alcoholic Beverage Council and served as its first president.11

Perhaps it paid off having a pitcher who had been undefeated during his time in the major leagues.

Neubauer later became sales manager for the Fiegenspan Brewing Company in 1942 and assistant to the president of Milwaukee’s Blatz Brewing Company. He was named general sales manager for another brewery, the Providence-based James Hanley Company, in early 1949.12 Neubauer was residing in West Barrington, Rhode Island, when he died of a coronary occlusion at the Rhode Island Country Club in Barrington. He was only 47 years old.