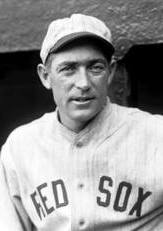 From 1922 to 1938, middle infielder Hal Rhyne went back and forth from the San Francisco Seals to the Pittsburgh Pirates, and back and forth from the Seals to the Boston Red Sox. Rhyne was the starting shortstop for the Red Sox from 1929 through 1931 and the first half of the 1932 season. He hit an even .250 in the majors and had a .950 career fielding percentage. And ended up working at Folsom Prison.

He was a slightly smaller than average infielder for his era – 5-feet-8 and 163 pounds, a right-hander. Rhyne was of American-German descent. His father Henry Foote Rhyne was from Mississippi, a fruit farmer who had settled in California and started a family with his wife Sarah, a Golden State native. Hal was born as Harold J. Rhyne on March 30, 1899, in Paso Robles, California. He was the ninth child in the family – one girl and eight boys. The father and his eight sons could have constituted a baseball team – in fact, the Rhyne family did have their own team, and Hal’s sister was part of it. An Associated Press story said, in part, “As a complete family team, they held their own with the best in the neighborhood, and the sister was by no means the least effective member of the nine.”1

Hal attended the Paso Robles public schools for eight years, then spent his four high school years at San Jose High School after the family moved to the larger locale. Hal starred in football, basketball, and baseball. He managed the baseball team and was also president of his class. He graduated on July 1, 1920.

Both he and his two-year-older brother Merle played for the San Jose Merchants in semipro ball, Merle at second base and Hal on third. His first ballclub was the Gilroy team of the Mission League of California, signing with them in February 1920 and playing for Gilroy that summer. By then, the family had moved inland to Lindsay, California. Rhyne was signed by the San Francisco Seals on September 9, ticketed to play for them in 1921. He married Miss Ferol Leone Say on October 2; the two had met during freshman year in high school. The following year he started his career in so-called Organized Baseball.

Rhyne was signed to the San Francisco Seals for the 1921 season, but there was no room for him in the Seals infield so he was sent to Des Moines (Western League) where he made his pro debut for manager Jack Coffey and played in 111 games, batting .311 as the team’s shortstop.2 He played winter ball after the regular season ended and was said to be “playing such excellent ball … that he already seems like a fixture on the Seals’ infield next season.”3

He indeed became a fixture at third base for the Seals in 1922 season and played in 189 of the team’s 199 games (Pacific Coast League teams played much longer seasons). He got knocked unconscious in the spring and committed four errors in one May game, but overall he hit .285 for manager Jack “Dots” Miller, and the Seals – who’d finished two games out of first place in 1921 – won the PCL pennant in 1922.

It was perhaps no surprise that a New York Yankees scout had called him “the best young shortstop in the league.”4

“Prince Hal” was so popular that a “Hal Rhyne Day” was held at San Francisco’s Recreation Park on August 20, and tickets sold out five days in advance. An estimated 14,000 fans turned out. He was presented with a gold watch and reportedly so moved he was unable to speak for a couple of minutes. The game lasted 17 innings, won by the Vernon club. The Sporting News wrote, “Hal Rhyne has already been acclaimed the greatest shortstop in the league.”5 Major-league scouts were already watching him quite carefully.

Rhyne hit .296 in 1923 – and his first five homers in pro ball. He drove in more runs that any other shortstop in the Coast League. The Seals won the flag again in 1923, despite manager Miller becoming ill, and dying in early September. Bert Ellison took over as manager in midseason when Miller had had to leave the team, and urged his teammates to win it for Miller.

Midseason rumors had Brooklyn offering as much as $100,000 for Rhyne’s contract.6

Rhyne’s first shot at the major leagues came in 1926, as second baseman (66 games) and shortstop (44 games) for the reigning world champion Pirates. He also played one game at third base. Rhyne got off to a slow start, with only one hit in his first five games (a single in his fourth game), but then launched into an eight-game hitting streak and was able to successfully push his way into the lineup. He hit for a .251 average and had two homers – one in June and one in July, both inside-the-park home runs. The first one looked like a game-winner, a two-run homer off Freddie Fitzsimmons in the top of the 13th during the June 17 game at the Polo Grounds – but a three-run Giants homer into the seats in the bottom of the 13th won the game

The Pirates finished in third place in 1926. Over the winter, the Seals reportedly offered Pittsburgh $35,000 to buy back Rhyne.8

Though he fought off a challenge from prospect Joe Cronin during spring training, Rhyne didn’t play as often in 1927, missing all but four games in May and all but two in September due to a serious cold in May and an injury. He was homerless but did hit for a .274 average. The Pirates won the pennant again in 1927 and Rhyne played second base in Game Three of the World Series against the Yankees, wedged in between the Waners in the lineup, batting second. He was 0-for-4 in the game, twice retired on fly balls and once on a popup to shortstop; an attempt to bunt his way on also failed. Yankees pitcher Herb Pennock only allowed three Pirates hits and won, 8-1. The Yankees swept the Series in four straight.

On February 10, 1928, Rhyne’s contract was sold back to the Seals. He picked up where he’d left off, batting .316 with a career-high six home runs, in 185 games. In June, Hal and Ferol welcomed Hal Junior to the family.

The Philadelphia Athletics drafted Rhyne in December, but in January 1929 placed him on waivers. The Boston Red Sox, taking advantage of their last-place finish, selected first and they needed a shortstop.9 They picked Rhyne. Wally Gerber was 37 and in his final season; Gerber played in 61 games (91 at-bats), but Rhyne got the lion’s share of the work, accumulating 387 plate appearances while working in 120 games. He would have played more but for a persistently sore hand midseason. He had an on-base percentage of .309 and a batting average of .251. His 38 RBIs ranked him fifth on the team. The Red Sox finished in last place, as they did almost every year for about a decade from 1922 through 1932. In 1930, he had a down year, batting just .203, working in 107 games.

Although knocked unconscious by a batted ball during spring training, he had his best year in 1931. By late May, manager Shano Collins said Rhyne was the best fielding shortstop in the league, even better than Joe Cronin in Washington.10 Boston sportswriter Burt Whitman declared him the best all-around player on the Red Sox and the only fixture on the club.11 “Great ball all season,” said Collins in late August.12 He played in 147 games and hit for a .273 average, with a .341 on-base percentage. Rhyne even ranked 14th in American League MVP voting. Rhyne’s .963 fielding percentage was best among league shortstops. The Red Sox even did better, finishing in sixth place, highest they’d placed since 1921.

After the season, he said he’d changed his approach at the plate and it had paid off. “I used to stand in the same spot for all styles of pitching. And I did not take a very vigorous cut at the ball … .I shift around the batter’s box and I swing from the hip.”13

In mid-August 1932 (he was only batting .227 at the time), Rhyne suffered doubly. His mother died in California and he broke his index finger in a tag play at second base. After the game on the 18th, he only appeared in one more game, late in September. He had played in 71 games and hit .227. The team finished a dismal 43-111.

On December 15, the Red Sox traded Rhyne and pitcher Ed Durham to the Chicago White Sox for four players: Bob Fothergill, Johnny Hodapp, Greg Mulleavy, and Bob Seeds. Burt Whitman of the Boston Herald bid him a less than friendly farewell, dubbing him “more or less surplus baggage” – though acknowledging that he’d been hurt, but saying he was “not so hot” when he was in the lineup.14

Manager Lew Fonseca of the White Sox planned to use him as a utility infielder, and that is how he was used, often coming into games in the later innings. He might have earned himself a spot at shortstop, but Luke Appling had a breakthrough year. Rhyne appeared in 39 games, spread throughout the season, accumulating 91 plate appearances. He batted .265, but this was his last year in the major leagues. In late October, he was sent to San Francisco as, effectively, the player to named later in a deal which had brought pitcher Lee Stine to the White Sox.

In early 1938, he was primarily coaching for the Seals but appeared in five games, with just one at-bat, before being beckoned to the Class B Western International League’s Tacoma Tigers where he became manager of the team. He played himself in a few games – 43 and 42 in 1938 and 1939, but only 11 in 1940. He hit well, more or less consistent with his lifetime minor-league mark of .291. Tacoma finished in last place in 1938 but improved to second place in 1939, and won the playoffs over Wenatchee. When injury hit his regular shortstop, Rhyne had himself play during the semifinals of the playoffs. He’d hit .387 during the season.

Rhyne stayed in Tacoma over the winter, taking a position with a manufacturing company. After a stretch in 1940 when Tacoma went 8-17, he resigned (or was fired) on June 24, saying he “did not want to stand in the way of reported negotiations for Tacoma to join the St. Louis Cardinal chain.”15 He returned to his home in California.

Hal Rhyne Jr. played first base and outfield for six seasons in the minor leagues, beginning with Wenatchee in 1947. He hit .289 overall, but never made it to the big leagues.

After baseball, Hal Sr. took up employment with the California Department of Corrections and worked for 21 years as a prison guard at Folsom Prison before retirement.

He died of a cerebral thrombosis on January 7, 1971, in Orangevale, California. He is buried in Sacramento.

In addition to the sources noted in this biography, the author also accessed Rhyne’s player file and player questionnaire from the National Baseball Hall of Fame, the Encyclopedia of Minor League Baseball, Retrosheet.org, and Baseball-Reference.com.

2 The announcement of the deal appeared in the San Jose Mercury News, April 5, 1921.

9 The waiver deal was reported in the January 20, 1929 Springfield Republican. The January 24 Sporting News provided a few more details.