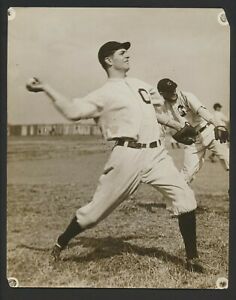 In his last major-league at-bat, after 29 failed attempts spanning three months, Cleveland Naps rookie spitball pitcher Harry Fanwell finally got a base hit. Two innings later, the injured Fanwell limped off the field, never again to play in a major-league game. He ended up as a one-for-30 “one-hit wonder.” But Fanwell fans will always have his 11-inning scoreless duel against eventual 31-game winner Jack Coombs on September 21, 1910. to remember.

Harry Clayton Fanwell was born on October 16, 1886, in Patapsco, Maryland, to Jeremiah (Jerry) Fanwell, a carpenter, and Sarah Catherine (Taylor) Fanwell, a dressmaker. Harry’s brothers were Francis Marion Fanwell and Ezra Oscar Fanwell. By 1903, Harry was working as a mill hand, and by 1906, as a carpenter like his father. In 1904, 17-year-old Harry “was in his usual good form” pitching for the Union Athletic Club amateur team,1 then later tossing a 12-strikeout shutout for the Albion Athletic Club.2 He returned to Albion for 1905. In August 1906, Harry threw an 11-inning, one-hit shutout for the B&O Railroad team in the local Baltimore Athletic League.3

In 1907, Harry pitched and his brother Oscar was an outfielder for the Maryland Meter Company team in a July win over the Walbrook (Maryland) Athletic Club. In August, Harry pitched and won both games of a doubleheader for a Hagerstown, Maryland semipro team. That led to his being signed by manager Al Buckenberger of the Rochester Bronchos of the Class A Eastern League.4 However, Fanwell was sold in February 1908 to the Utica Pent-Ups of the Class B New York State League.5 Reporting in May, he lost his debut, 7-5, to Syracuse.6 A month later, he was released and returned to his old Hagerstown team. In his first game back with Hagerstown, Fanwell, “Hagerstown’s most successful twirler last season,” shut out Frederick 2-0.7 He was “warmly cheered when he entered the box, and as frequently applauded throughout the game.”8 Unfortunately, he badly injured his left hand in mid-July when a bottle shattered in his hand while he was running to catch a train in Frederick. This cost him a spot on a Seaford, Delaware, team on which he had already agreed to play.9

The six-foot, 175-pound Fanwell returned in 1909 to Hampden before moving in June to a Frederick, Maryland contingent. Released in August, he returned to Hagerstown for the season.

Before the 1910 season, he was turned down by both East Liverpool and Youngstown of the Ohio-Pennsylvania League, who deemed him not “good enough at the beginning of the season to tender him a contract.”10 But he hooked on with the Danville Red Sox of the Class C Virginia League. He shut out the league leaders, Roanoke,, striking out 11 in his Danville debut.11 Fanwell posted a 6-4 record in 12 games, although the lefty batter12 was an anemic two-for-thirty at the plate . His “good curves and fast-breaking spitter” were “responsible for Danville’s commanding lead in the Virginia League.”13 He drew the attention of Cleveland Naps manager Jimmy “Deacon” McGuire, who sent scout Sam Kennedy to look him over,14 eventually signing Fanwell for $2,500.15

Fanwell made his major league debut on July 23 against the American League-leading Philadelphia Athletics ace Jack Coombs. The rookie allowed but five hits in a 2-0 complete-game loss to Coombs, pushing the Naps 19 games out of first place. Still, the Cleveland Plain Dealer lauded the performance:

Fanwell pitched great ball and considering that it was the first game not only for Cleveland but also his initial box into fast company his exhibition was not excellence – it was something more than that – it was sensational.16

The Washington Post wrote that Fanwell, “in the face of rather disheartening support, showed his nerve,” displayed “a change of pace that was mystifying,” and “pitched in a way that would win nine out of any ten games played.”17 Even the opposing paper, the Philadelphia Inquirer, was impressed, claiming that “this kid Fanwell” will “win a lot of games before he goes back to the bushes.”18

In his second start, his home debut, Fanwell held the St. Louis Browns to four hits in a 2-1 victory, with the lone Browns run coming on a Nap Lajoie boot.19 The Baltimore Sun hailed the performance of Fanwell, from nearby Hampden, “the town that stage comedians once joked about.”20 The Plain Dealer wrote that he “depended largely upon his spitter and side arm fastball” and “Fanwell Pitches Splendid Game,” while displaying “considerable of that important requisite – NERVE.”21 Fanwell won his second game, in just his third appearance, on July 31 with four relief innings in Cleveland’s 11-inning, 5-4 victory over the St. Louis Browns. However, over 14 more appearances, including nine starts, throughout the rest of the season, Fanwell would not win another game.

On August 11, he had two wild pitches and two hit batsmen in a loss to Walter Johnson of the Washington Senators. Two days later, he surrendered nine runs on 12 hits with three wild pitches, in an eight-inning relief stint. On August 18, he had part of a nail on his pitching hand ripped off by a line drive off the bat of the Senators’ Kid Elberfeld.22 On August 26, he allowed only six hits, including a double by Jake Stahl, but lost, 3-0, as Eddie Cicotte hurled a two-hitter for the Boston Red Sox. On August 31, Fanwell took a 1-1 tie into the bottom of the ninth against the New York Highlanders, having only surrendered three hits, before allowing three more safeties in the Highlanders’ 2-1 walk-off victory. On September 9, Fanwell was “too liberal” in walking four in the first inning in a loss to the Detroit Tigers.23 He lost to the same Tigers five days later.

On September 21, he had a masterful duel in a rematch with the Athletics’ Coombs. Both starters pitched 11 shutout innings, with Fanwell “acquit[ting] himself splendidly,” in the scoreless tie, another of Coombs’ 13 shutouts in his spectacular 31-win, no-homer-allowed season.24 The Philadelphia Inquirer chimed in, commenting on Fanwell’s “excellent pitching.”25 With the New York Highlanders’ loss, the Athletics clinched the American League pennant. Next, Fanwell was a hard-luck loser, 2-1, on September 29, in his last start of the year, as four Indians were thrown out at the plate.26

On October 1, he pitched in his last major league game, tossing three relief innings against the Chicago White Sox. Fanwell also finally collected his one and only hit, a single off Jim Scott. Regrettably, after walking in the sixth inning, he was injured sliding into second base and had to leave the game. Fanwell ended the season with a 2-9 pitching record for the fifth-place Naps. He handled all 38 of his fielding chances without an error. Even with his final-day knock, he ended up with the “booby batting average” in the league of 1-for-30, a .033 clip.27 This, combined with his Danville totals, made him three-for-60 at the plate for the year. After the regular season concluded, Fanwell pitched for the Naps in the October “Ohio championship” against the Cincinnati Reds.28 To cap off the year, he married Bernice B. Aleshire in late December 1910, whom he met while on a hunting trip the previous year, when he helped her home after an accident.29 They had a daughter, Merle Lycett Fanwell, born on September 30, 1911, in Baltimore. But the couple would divorce before the decade was over, with Merle living full-time with Bernice.

Harry left Baltimore in February 1911 for the Naps camp in New Orleans, expressing confidence about his playing future:

You can’t take a raw minor leaguer and rush him into fast company and expect him to make good on short notice. I am entirely satisfied with my career last year, but unless I do better this season, I’ll be the most disappointed man who ever tried to make good at baseball. I am feeling fine and have lots of confidence. You may take it from me that I’ll never be advertised again as the worst batter in the league.30

During spring training in muggy Louisiana, Fanwell wrote to a friend back home about “blisters on his feet from running around the parched diamond,” but also that he had been “told by Manager McGuire that he is expected to be one of his mainstays this season.”31 He and Gene Krapp were the only spitball pitchers in camp, with Fanwell able to throw it overhand or sidearm. Unfortunately, Fanwell was labeled “a disappointment” and farmed out, staying in New Orleans to play for the Pelicans of the Class A Southern League.32 After two games with the Pelicans, Fanwell was shipped to the Portland Beavers of the Class A Pacific Coast League, where he lost his debut on April 30 to Sacramento.33 He pitched in only four games for the Beavers before being returned to New Orleans in June, with Cleveland still owning a ‘string’ on him.34 Fanwell was recalled by Cleveland on July 21,35 as the two Charlies, Naps owner Somers and New Orleans manager Frank, had a tight working relationship. However, Fanwell never saw any game action. The Naps sold Fanwell to the Davenport (Iowa) Prodigals of the Class B Three-I League at the beginning of August to complete a prior deal for infielder Ray Chapman.36 Fanwell won his debut for seventh-place Davenport against Peoria (Illinois), with “his jaw padded with a dime’s worth of slippery elm bark, and his supply of saliva never weakened.”37 Fanwell posted a 6-5 mark for Davenport, before being purchased by the Toledo Mud Hens of the Class American Association for 1912.38

In February 1912, however, Fanwell was sold by Toledo to the New Haven Murlins of the Connecticut State League.39 He went 7-4 in 111 1/3 innings over 17 games. In August, the first-place Murlins sold Fanwell to the Worcester Busters of the Class B New England League,40 but he refused to report, and was subsequently suspended.41 New Haven owner George Cameron still showed Fanwell as suspended from baseball in January 1913 for never reporting to Worcester.42

Fanwell went to work at the Shelby Tube Mill in Ellwood City, Pennsylvania, and traveled to New York for a three-week visit with his parents.43 A humorous 1913 wire story mentioned Fanwell in a baseball article titled “Live Up to Their Names.”44 In May, he pitched for the Ridgefield (New York) Athletic Club.45 By 1915, Fanwell was a clerk, and also umped semipro games.46 In 1918, he was listed as Class 1-F for the draft exemption board, under “Appeals and Industrial Claims.”47

In 1921, Harry remarried, to Lottie O. Morrison, two year his senior and who also had been divorced. After Harry’s father Jerry passed away, mother Katherine moved in with the new couple. Fanwell became a full-time residential painter by the mid-1920s. The 1930 census showed him as an industrial building painter, living with his wife and without children. In the 1950s he served as a guard at Catalyst Research in Baltimore.

Harry Fanwell, the “beloved husband of Lottie O. (Morrison) Fanwell,” died of arteriosclerosis48 on July 15, 1965, at the age of 78, in Baltimore, Maryland, and is buried at the Woodlawn Cemetery in Baltimore.

This bio was reviewed by Bill Lamb and Norman Macht and fact-checked by Terry Bohn.

12 Baseball-Reference.com lists Fanwell as a left-handed batter, although B-R Bullpen lists him as a switch-hitter.

48 From the death certificate retrieved from Fanwell’s Baseball Hall of Fame player file.