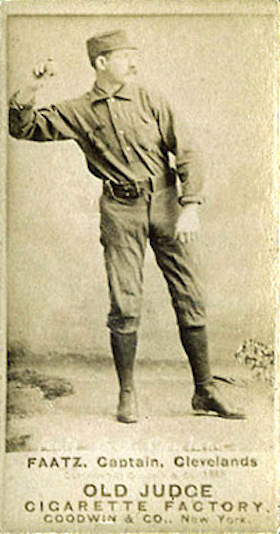 Said by The Sporting News to be “as slender as a knitting needle and long as a fence rail,” the six-foot-four, 196-pound Jay Faatz was the type of player who befuddles modern historians who see only a first baseman with a career .584 OPS in more than 1,200 plate appearances and wonder what professional connections he must have had to remain in the majors so long. In actuality, Faatz, who was believed until recently to bear the first name of Jayson because he was known throughout his baseball career as Jay, was among the more intriguing and innovative players of his time. An expert poker player with a fondness for diamonds and all forms of jewelry, he was a strong field leader but not always a popular one due to an explosive temper and an inability to sanitize his language during arguments with umpires, fans, opposing players and even at times his own teammates. After the close of the 1889 season, Faatz was among John M. Ward’s chief assistants in organizing and launching the Players League, but while Ward and most of his subordinates were later welcomed back into the National League, in the end Faatz’s imprudence and lack of tact scotched his chances of ever working again in the majors.

Among the least talented players to participate in the Players League, at least on the surface, Faatz had two fortes, neither of which can readily be detected from his career statistics profile. He was an exceptional base runner, especially for a first baseman, and skilled at getting hit by pitches, sticking his arm out as if by accident while pretending to dodge them, and so subtly that he almost always got his base. Faatz and Curt Welch were the two most instrumental players in forcing rules makers to take a hard look at the hit-by-pitch rule after the 1888 season and think seriously of abolishing it, since most games at that time were officiated by a single umpire who all too often, particularly with men on base, was not ideally positioned to judge whether a batter had made a sincere effort to avoid being hit by a pitch.

Born on October 24, 1859, in Weedsport, New York, the beanpole right-hander first earned mention in 1882 with the independent St. Thomas Atlantics, where he played first base with his older brother Charlie (born in 1853 and a longtime minor league player and manager) at shortstop, Bill Watkins at second base and Bob Emslie doing most of the hurling. In 1883 he moved from the Canadian entry to the Saginaw Greys of the Northwestern League and, after spending most of 1884 back with the Greys, joined the feeble Pittsburgh American Association team late that season after the Northwestern loop folded , hitting just .241 in 29 games.

Faatz returned to the minors for the next three years, the latter two of which were spent with the Toronto Canucks of the International League before being acquired by the Cleveland AA club. According to the March 9, 1895, Sporting Life, Faatz, while acting as Toronto’s captain in 1887, was socked with a record $500 in fines by umpire John Connolly “in $5, $10 and $25 doses but it didn’t go,” meaning the money was never collected by league officials In the spring of 1888 Blues manager Jimmy Williams, perhaps impressed by Faatz’s alacrity at getting in umpires’ faces, installed his new first baseman as team captain and was richly rewarded when Faatz got off to a torrid 32-for-77 start (.416) and in mid-May was second in hitting in the American Association only to Tip O’Neill’s .420. By June, however, Williams had replaced him as captain after berating him for not pulling rookie pitcher Doc Oberlander out of a game when it was clear that Oberlander didn’t have anything. Also said to be lax in enforcing club rules and too easy on his men, Faatz was replaced, first, by catcher Charlie Snyder and then by shortstop Ed McKean, but after Tom Loftus took over the club’s reins from Williams, one of Loftus’s first moves was to reinstate Faatz as captain. The promotion failed to revive the first sacker’s bat, as he hit just .234 in his final 393 at-bats of the season.

After holding out in the winter of 1888-89, according to the January 23, 1889 Sporting Life, upon resolving his financial differences with the Blues’ management, Faatz continued as captain in 1889 when Cleveland switched to the National League but fell off even more dramatically in almost every offensive department owing to a lingering wrist injury and personal tragedy. On March 8, just before the Blues were scheduled to go to Hot Springs, Arkansas, for spring training, his wife Nellie died of typhoid fever scarcely three weeks after the couple were married. One of Faatz’s few highlights in an otherwise sad year came on July 26 at Pittsburgh when his hot shot down the third-base line with two men on base struck Allegheny’s third sacker Deacon White on the foot and ricocheted under a row of seats, giving him time to circle the bases for a historic three-run homer that never reached the outfield.

That winter Faatz’s poor year in 1889 and his stubborn wrist ailment limited him to an advisory role with the Cleveland Players League entry. But in mid-July, when both he and outfielder-pitcher Larry Twitchell were transferred to the Buffalo PL club as per an agreement to help the weaker teams, Faatz reactivated himself and became the last-place Bisons’ player-manager for 34 games before being either fired or “laid off” with pay—reports conflict–on September 14 and replaced by Connie Mack as field captain. His final major league appearance in a playing role came on September 10 at Buffalo in the second game of a doubleheader when he went 1-for-4 against Chicago Pirates rookie Charlie Bartson.

The following season Faatz joined George Frazier’s Syracuse team after it dropped down to the Eastern Association from the AA and served as Frazier’s captain and first baseman. He remained a force in Syracuse’s fortunes until 1894 when he was canned after just 25 games as the Stars’ player-manager. Faatz put aside his spikes and glove at that point, although his elder brother Charlie carried on for several more seasons as a player-manager in the lower minors, finishing as the bench pilot of the Albany Senators of the New York State League for a few weeks in 1899. After leaving the game, Jay Faatz, remained in Syracuse and sold insurance until shortly before his death on April 10, 1923, at age 63. He is buried in Weedsport Rural Cemetery.

This biography is an expanded version of one that appeared in David Nemec’s Major League Baseball Profiles: 1871-1900, (Lincoln, Nebraska: Bison Books, 2011) vol. 1.

In assembling this biography I made extensive use of both Sporting Life and The Sporting News throughout the bulk of the Faatz brothers’ baseball careers, 1883 through 1899. For the 1882 season I consulted the New York Clipper. Both Jay and Charlie Faatz’s major and minor league statistics and managerial records came from www.baseball-reference.com.