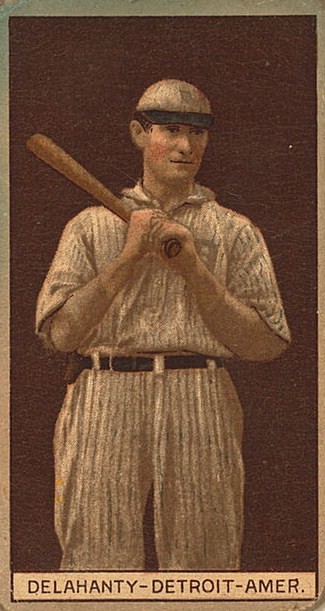 Remembered mostly for his more famous older brother Ed, Jim Delahanty was a fine player in his own right, and one of the most well-traveled hitters of the Deadball Era. During a professional career that lasted nearly two decades, the free-swinging right-hander played for fifteen different clubs, including eight in the major leagues. Despite his lengthy itinerary as a professional ballplayer, Delahanty bore an excellent reputation within his profession. “Delahanty is looked upon as one of the ‘classy’ boys of the American League,” Alfred Spink wrote in 1910. “He is a most graceful fielder and a congenial sort of a fellow both on and off the field.” Though second base was his primary position, during his career the versatile Irishman filled every position on the diamond except catcher, and finished his career with an excellent .283 batting average in 1,186 career games.

James Christopher Delahanty was born on June 20, 1879 in Cleveland, the second youngest of five future major league brothers, though he never played on the same team with any of them at the major league level. Jim was a distant 12 years younger than his famous brother Ed, and growing up followed more in the footsteps of his older brothers Joe and Tommy, who made names for themselves on the Cleveland sandlots. (Younger brother Frank also made the big leagues. The only baseball-playing Delahanty brother not to make the major leagues was Willie.) In the mid-1890s, Jim’s famous last name got him a tryout with the Fort Wayne (Indiana) club of the Inter-State League. At 5’10” and 170 pounds, Jim did not make a good impression on the club, and subsequently returned to Cleveland to play semipro ball. After writing to the Lima, Ohio entry in the Northwest Ohio League requesting a tryout, Delahanty made the team as a third baseman.

Dubbed the “Yellow Kid” after a cartoon of the time, his play at Lima led his brothers to encourage him to try for a higher level of competition. He played in 1898 for Montgomery of the Southern League. The league folded, so Jimmy hooked up with brother Tommy in Allentown, Pennsylvania. Playing shortstop with Tommy at second base, Jim impressed manager Billy Sharsig with his sandlot scrappiness and superior range. When Joe’s contract was purchased from the Paterson, New Jersey club three weeks later, Allentown featured three Delahantys in the infield.

The Allentown brother act was broken up in the 1900 season with the demise of the Atlantic League. Jim’s contract was sold to Worcester (Massachusetts) of the Eastern League, where he hit .281 in 80 games at short and third. After the season, the Chicago Orphans outbid three other National League teams for his services, but Jim opened the 1901 season for the Orphans with just a .190 average in 17 games at third base before being benched. In late June, the rookie was sent home for the rest of the season after breaking his kneecap and coming down with a case of malaria. The following winter Chicago sold him to the New York Giants.

In no small part because of his last name, his arrival at the Polo Grounds in late March for spring practice merited a mention in the New York Times. In his brief tenure with the Giants, however, Delahanty was a disappointment. Named the club’s opening day starting right fielder, Delahanty appeared in just seven games, batting .231 before drawing his release in early May. He hooked on with Little Rock of the Southern Association, where he played third, batted a robust .328 in 101 games and led the league in triples. He continued with Little Rock in 1903, and was returning home to Cleveland to recuperate from a cracked shoulder blade when brother Ed died after falling from a bridge into the Niagara River. Jim rejoined Little Rock later in the year, finishing the campaign with a league-best .382 batting average.

His showing in the Southern Association prompted another big league trial, this time for the Boston Beaneaters of the National League. Jim appeared in a combined 267 games over the next two years, playing primarily third base (in 1904) and left field (in 1905) and batting a combined .272 with 115 RBI.

In January 1906, Cincinnati manager Ned Hanlon traded Al Bridwell to Boston for Delahanty. Though the deal met with some skepticism in Cincinnati, where Bridwell had become a fan favorite, Delahanty won the starting third base job from Hans Lobert and Mike Mowrey and put in a fine season, as he batted .280 with a stellar .371 on base percentage in 115 games. Despite that success, Delahanty’s stay in Cincinnati was short-lived. That September, owner Garry Herrmann sold the infielder to the St. Louis Browns for $1,500.

Delahanty lasted only 33 games with the Browns, contributing a disappointing .221 batting average with only three extra base hits before St. Louis sold him to the Washington Senators on June 11, 1907. Shifted to second base full time, Delahanty found his new environs to his liking, batting .292 in 108 games for Washington. The following year, Delahanty put in another fine season, batting .317 in 83 games, though his campaign was marred by nagging injuries and an ugly incident in his hometown of Cleveland on August 4. In a game which Washington lost 7-5, Delahanty and teammate Otis Clymer were ejected for arguing with umpire Silk O’Loughlin. According to reports, Delahanty responded to the ejection by unleashing a torrent of profanity that could be heard throughout the park. American League president Ban Johnson responded to the incident by suspending Delahanty, fining him $50, and banning him from the Cleveland park for one year. Not surprisingly, Delahanty considered the ruling unfair and excessive. “O’Loughlin’s decisions were way off and I told him so, and when he put me out of the game I grew sore and said things to him, but I did it quietly and no one in the stands heard it,” Delahanty insisted. In order to be fair to the other contenders in that year’s hotly contested pennant race, Washington manager Joe Cantillon decided that if Delahanty could not play in Cleveland, he also wouldn’t play him in Detroit, Chicago, or St. Louis, a decision which resulted in Delahanty missing 14 games in addition to the 13 Johnson had suspended him for. At the start of the next season, Johnson lifted the Cleveland ban.

Jim remained with Washington through August 1909, when he was traded to the Detroit Tigers for Germany Schaefer and Red Killefer. Delahanty played 46 games down the stretch for the eventual AL champs, and appeared in all seven World Series games, leading the Tigers with a .346 average, including five doubles, in a losing cause. After the Series, Alfred Spink remarked that Del’s “aggressive playing, desperate base running and timely bingling was probably one of the real features of this series.”

After another solid campaign in 1910, Delahanty put together the best season of his career in 1911–thanks in part to the new cork-centered baseball–as he stayed healthy all year and batted .339 with career highs in on base percentage (.411), slugging percentage (.463), runs (83), hits (184), doubles (30), triples (14) and RBI (94). With the 32-year-old Delahanty having lost several steps in the field, however, manager Hughey Jennings also played Delahanty at first base 71 times during the season.

As good as his 1911 season was, it marked Delahanty’s last hurrah in Detroit. The following August, despite having posted a solid .286 batting average and .397 on base percentage for the season, Delahanty was given his unconditional release. Though newspaper reports at the time stated that “injuries and illness” were the motivating factors for the decision, another report suggested that “his too close touch with the revolt spirit after last season’s famous Ty Cobb incident caused his undoing and he dropped out.” Perhaps Delahanty’s actions in supporting the Tigers’ strike following Cobb’s suspension for attacking a fan in May, coupled with his $4,000 salary, led the Tigers to release him.

In any event, Delahanty hooked on with the Minneapolis Millers of the American Association, where he remained through the beginning of the 1914 season, when he signed with Brooklyn of the upstart Federal League. Appearing in 74 games for the Tip-Tops, Delahanty batted a solid .290 with a .372 on base percentage. He finished out his big league career in 1915 with the Tip-Tops, appearing in 17 games and batting .240 before drawing his release. His professional career concluded that autumn with Hartford of the Colonial League, an independent minor league affiliated with the Federal League, where he led the circuit in batting (.379) and managed the team to a league championship.

After his playing career ended, Delahanty moved back to Cleveland, where he lived with his wife Hester and daughter Eunice, and worked as a truck driver for the Cleveland Street Repair Department. He died at St. John’s Hospital in Cleveland after a prolonged illness on October 17, 1953, at age 74, and was buried in Cleveland’s Calvary Cemetery.