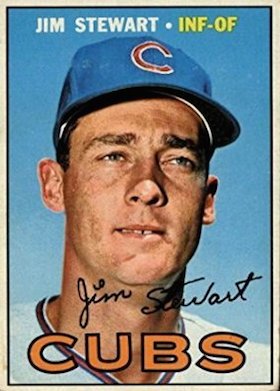 A standout in three sports, he was considered one of the greatest athletes in the history of his college. Yet in his career as a professional baseball player, he failed to achieve stardom. Jimmy Stewart was seemingly a substitute with no position to call his own, but he carved out a 10-year career in the major leagues, helped the Cincinnati Reds win a pennant, and played in a World Series. He was a “Super Sub.”

James Franklin Stewart, son of Nelle Madge Golden and John Abner Stewart, was born June 11, 1939, in Opelika, in Lee County in East Central Alabama about 15 miles from the Georgia state line. Jimmy had an older sister, Edith Ann, but he was the couple’s only son. He attended Lafayette High School, about 20 miles north of Opelika, where he was a star multi-sport athlete.

After graduating from high school in 1957 Stewart attended Austin Peay (pronounced “pea”) State College in Clarksville, Tennessee, on a basketball scholarship. The school was named for the governor of Tennessee who had signed the bill that made the teaching of Darwin’s Theory of Evolution illegal, which led to the famed “monkey trial.” In Peay’s honor, the school’s team was called the “Governors.”

Stewart led the Governors to a 22-9 record in 1961, qualifying them for the NCAA Division II basketball tournament. He was named to the South Central Region’s All-Regional team and the Volunteer State Athletic Conference (VSAC) All-Star team. Austin Peay students enthusiastically cheered their team on with shouts of “Let’s go Peay.” In track the versatile Stewart set a school record in the 220-yard dash, which stood for many years.

Although he lettered in both basketball and track, it was in baseball that his star shone most brightly. From 1959 to 1961 he played shortstop and third base for the Governors. In 1961 he hit .435, the second highest batting average in school history. His average for his college career was .369. In his senior year he was captain of the Govs and led them to an 11-4 record, earning recognition on the all-VSAC team, and attracting the attention of professional scouts. He was named the school’s best athlete, regardless of sport, in 1961. Considered one of the greatest athletes in Austin Peay’s history, Stewart was inducted into the Austin Peay Athletics Hall of Fame in 1978.1

On June 2, 1961, he was signed by the Chicago Cubs as an amateur free agent. In the same year that Stewart started his professional baseball career, at age 22, he married 19-year old Donna Carpenter. The marriage, which lasted throughout his lifetime, produced two sons, James Franklin, Jr., and Joseph Andrew.

The Cubs assigned Stewart to the Carlsbad (New Mexico) Potashers in the Class D Sophomore League. He hit .308 for the Potashers as a third baseman and shortstop, earning a promotion to the St. Cloud (Minnesota) Rox of the Class C Northern League. Stewart hit .307 for the Rox, showing that he was ready to face stronger competition. He jumped all the way up to the Class AAA Pacific Coast League Salt Lake City Bees in 1963. Although he hit only .264 for the Bees, he received a September call-up to the parent club.

Three minor leaguers were called up by the Cubs in early September – Johnny Boccabella, Billy Cowan, and Jimmy Stewart. At the time Boccabella was viewed as the most promising of the three, but he turned out to have the least productive major-league career. All three were sent to the Arizona Instructional League at the end of the season.

The Cubs were operating at the time under their bizarre “College of Coaches” system, and one of their head coaches, Bob Kennedy, explained: “The fall schedule in Arizona is ideal for working with these youngsters under competitive conditions. You have only the kids there, and you can concentrate on them.”2

Stewart made his major-league debut for the Chicago Cubs on September 3, 1963, at the age of 24. The six foot, 165-pound switch-hitting infielder played his first game for the Cubs in a 16-3 loss at Candlestick Park. With the Cubs trailing Juan Marichal and the Giants, 13-3, in the top of the fifth inning, Stewart pinch-hit for shortstop Andre Rodgers and flew out to right field. He appeared in 13 games for the Cubs that season, nine at shortstop, one at second base, and the others as a pinch-hitter, hitting .297 for the 13 games.

Back with the Cubs in 1964, Stewart displayed his versatility, playing games at second base, shortstop, third base, and the outfield. He hit .253 in 132 games, then returned in September and October to the Arizona Instructional League. In 1965 he played mostly shortstop and left field for the Cubs. His batting average fell to .223. In 1966 he divided the season between Chicago and Tacoma, the Cubs farm team in the Pacific Coast League. He hit only .167 in 57 games for Chicago, but hit PCL pitching at a .292 clip in 59 games for Tacoma.

In 1967 Stewart started the season with the Cubs, but was sold to the Chicago White Sox on May 22. He played 24 games for the Pale Hose, but spent most of the season with Indianapolis, the White Sox affiliate in the Pacific Coast League, hitting for .320 for the Indians, the highest average he attained in his career. In ’68 the Sox changed their PCL affiliate to Hawaii, and Stewart played for the Islanders, the fourth PCL club for which he had labored in six years. The Cincinnati Reds acquired him in the Rule 5 draft on December 2, 1968.

Although he did not win a regular position in the starting lineup, Stewart had a good year for the Reds in 1969, playing in more than 100 games, hitting .253. He and several other backup players bonded as the “Red Raiders.” The Raiders had perhaps their best showing of the year on the night of June 4, when the Reds rallied for three runs in the ninth inning to defeat the Pittsburgh Pirates, 5-3, at Forbes Field. All three runs were scored by backup players. Chico Ruiz, pinch-running for Johnny Bench, scored first. Woody Woodward, pinch-running for Fred Whitfield, scored second. The third run was scored by Stewart, who was filling in for Pete Rose, who was on duty with the Army Reserve. Stewart beat out a slow bounder to shortstop, stole second, and went to third on a wild throw to get into position to score the go-ahead run. Speaking of the Red Raiders, manager Dave Bristol said “I love ‘em all. They’re always pulling for the other guy. Never griping. And when they’re called upon, they do the job.”3

An anonymous scouting report on Cincinnati players in 1969 read: “Jim Stewart: Outfielder and pinch-hitter. Looked like he could handle bat pretty good. Didn’t play much, defensive mostly, Pinch-hitter and fill-in guy. Could help a particular club with his qualifications. Heads up type of player.”4

Even though he wasn’t a regular, Stewart made an important contribution to Cincinnati winning the pennant in 1970 by filling in whenever and wherever needed. He hit .267 in 101 games and was the Reds best pinch-hitter, going 13 for 39, for a .333 average. He played briefly in the post-season that October. In Game Two of the National League Championship Series at Pittsburgh he replaced Hal McRae in left field as part of a sixth inning double-switch. He played errorless ball in the field and went 0-for-2 at the plate. In the World Series against the Baltimore Orioles he appeared twice as a pinch-hitter, both times in the bottom of the ninth at Riverfront Stadium. In Game One he batted for Darrell Chaney and struck out against Jim Palmer as the Reds fell, 4-3. In Game Two he batted for Don Gullett with two out and the Reds trailing, 6-5. He drove a pitch from Dick Hall into deep centerfield. Paul Blair caught the drive up against the wall for the final out of the game.

Stewart earned the respect of his colleagues and the name “Super Sub” by playing every position in the field except pitcher. His teammate Tommy Helms said “Stew was a great guy, versatile on the field and he kept it hoppin’ on the bench when he wasn’t playing. The thing I remember most about him as a player is that he caught an inning for us in Los Angeles in 1970. That’s no easy thing to do, catching a major league pitcher when you’re used to playing the infield or the outfield. But that kind of versatility is how you manage to play years in the bigs without being a regular.”5

In 1971 Stewart’s playing time was reduced to 80 games as his hitting fell off to .232. As a pinch-hitter he led the league with 48 times at bat, but collected only 11 hits for a .229 average. He played second base, third base, and all three outfield positions.

On November 29 he was traded along with Tommy Helms and Lee May to the Houston Astros for Ed Armbrister, Jack Billingham, Cesar Geronimo, Denis Menke, and Joe Morgan. At first the trade displeased Cincinnati fans, as Helms and May were among the Reds most popular and productive players. Although Stewart was not as productive as the other two, he was equally popular with the fans and his teammates. McRae spoke his mind: “They’re all great guys, ones you hate to lose. They livened up the clubhouse, kept everyone loose. None of the three was temperamental. They were the same people every day. The trade with Houston is going to hurt the morale of the team, unless the players we received in exchange are the same type we gave up.”6

As it turned out, though, the deal was actually lopsided in favor of the Reds. It has been called one of the worst trades in baseball history.7 Although Helms and May had a few good years in Houston, Stewart was well past his prime. On the other hand, the players Cincinnati got from the Astros played major roles in the success of the Big Red Machine in years to come.

Stewart played two years for Houston, hitting .219 in 1972 and falling below the “Mendoza Line” with .191 in 1973. His final major-league game came at Atlanta on September 29, 1973. In the top of the eighth inning, he pinch-hit for Larry Dierker, with the Astros trailing, 7-0. Stewart hit a Carl Morton pitch for a single, his 13th hit of the season and the 336th of his 10 years in the majors. He was 34 years old when he made his final appearance as a professional baseball player.

He never returned to the minors as a player, but he did serve one year (1983) as the manager of the Eugene (Oregon) Emeralds, Cincinnati’s affiliate in the short-season Class A Northwest League. It was not a successful season, as the Emeralds went 28-42, a .400 record, and finished in last place in the league’s South Division, 25 games behind the first-place Medford A’s. Two of the Emerald players, Terry Lee and Terry McGriff, later played for the world champion Cincinnati Reds in 1990.

From 1984 through 1991 Stewart was a scout in the Cincinnati organization. From 1992 until 2006 he served as a special assignment scout for the Philadelphia Phillies.

After his retirement Stewart lived with his wife Donna in Odessa, Florida, in Pasco County, about 20 miles north of Tampa. The area is noted for its lakes, parks, and recreational facilities.

James Franklin Stewart died at his home in Odessa on November 24, 2012, at the age of 73. The cause of his death was not reported. He was survived by his wife of 51 years, Donna, his two sons, James and Joseph, seven grandchildren, and seven great-grandchildren. Funeral services were held in Odessa and a memorial service in Lafayette, Alabama. He was buried in the Center Baptist Church Cemetery near Lafayette in Chambers County, Alabama. Donna’s name is already carved next to his on the tombstone they share.8

Unless otherwise noted baseball data were mainly from baseball-reference.com and family information was mostly from BeenVerified.com.